"Wait!" the fox shouted, "It's a misunderstanding"

"You killed my husband" one of the bears roared.

"We didn't" the deer said "It was an accident"

"I saw you push him off the cliff!" another bear said.

"We didn't mean it" the deer replied "He was trying to kill us! We had to fight"

There was a moment of silence. Finally, someone spoke up.

"Then thank you" the bears said, "I know that you didn't mean it. But I didn't expect you to build a gravestone for him"

They walked for hours, resting at the stream, the berry bushes and fruit trees. Then, the fox asked the bears the question everyone had been wondering.

"How did you know we were in the kingdom of chipmunks?"

"Easy" the bear said, "We traced your footprints"

The walk continued for another hour. Finally, the bears stopped.

The fox and the deer looked at each other.

"I guess this is a farewell then", the deer said.

"Thank you for all of your help", the fox thanked the deer.

"Until next time!" the deer said.

They parted. The fox went to the left, and the deer went to the right. As the bear watched both of the animals walking while glowing with the light of the spring. The bears sighed.

"I guess it is true then, spring really brings farewells..."

Well, my dear readers. This is the story of how an uncanny friendship of a fox and a deer began and ended. They will indeed, embark on many more adventures together. But that is for another time. Thank you for reading. 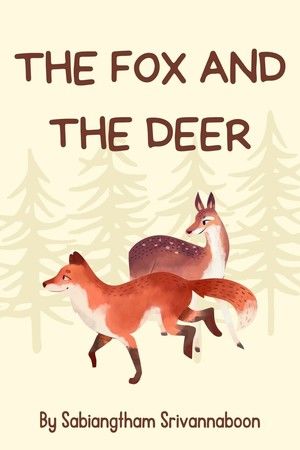