Somehow, I fell in Love With My School's Biggest Gal!

ACE Games was a giant arcade complex situated in downtown Akiharra. It was considered to be one of the most modern arcades in all Japan. Unlike many other arcades, which catered to a specific theme or gaming medium, ACE aimed to make itself the ultimate otaku sanctuary. There were traditional video game cabinets, a board game café, an entire hall of crane games, a floor of classic carnival style games where you could win prizes, classic arcade games, and even games made to advertise for a specific anime. There were batting cages and a hall of more physical and sport-related games, such as skeeball and hoop shooting. In addition to all the games, there were multiple small merch stores and lots of food stands and mini snack shops. Bookmark here

ACE Games was the mall of the otaku and gamer world. It was very popular and lived up to its glowing reputation. While it was always crowded, somehow, there was never poor service or excessive wait times.Bookmark here

As such, it was Sora’s favorite place on earth. However, for the first time, he felt embarrassed and awkward as he entered the building with a teenage girl excitedly bouncing next to him. “Wow! I love this place so much! I blow way too much of my money here! Hey, I know I said I wanted to try out the new dancing game, but I want to try out other stuff, too! What do you want to do? We could go to the gallery with all the shooting games first, if you're into that stuff? Ooh, or we could see if they have any cool prizes at the indoor carnival? Or maybe the crane game hall? Or…or…or!” Bookmark here

Sora felt unusually self-conscious of his nerdy interests. He knew that The G-Aki- loved the fact that he was into anime and gaming. But the feeling of being understood still felt strange. Most people weren’t into this stuff as hardcore as he was, much less girls. Besides, despite being cautious of Aki, he felt obligated to impress her and not come off as an idiot. She was a member of the opposite gender, after all! He felt cold stress-sweat pouring down his back. Geez, why did dealing girls have to be so difficult? Bookmark here

“I don’t know.” “What would you like to do first?” “Ummm…crane game room!” Aki clapped her hands together. “O-okay.” Sora was better at crane games than most people but it still wasn’t exactly his specialty. He hated being bad at stuff, but he particularly hated being bad when people were watching him! And since the person in question was female…not only that, but he did have his pride as a gamer to protect. How could he let someone show him up in his area of expertise?Bookmark here

“Come on, Sora-Kun!” Aki whined, dragging him to the escalator by his hand. “Gah! Okay, okay! Jeez, Assagi-San! Take it easy, will ya’? We got all afternoon and the games aren’t going anywhere, you know” He complained as she dragged him off the escalator. He stumbled and nearly fell flat on his face. As this rate, she was literally going to break him to pieces!Bookmark here

“Stop it, you meanie!” Aki suddenly said in annoyance with a childish pouting look on her face. “What? What did I do?” Yelled Sora in frustration. “I told you! Call me Aki-Chan!” “Urg…” Sora looked away. Too cutesy and familiar! What was she thinking, that they were girlfriends or a couple or something? But, at this point, he just wanted to make her happy. She was too energetic for the good of his own health and safety! He made an even more ridiculous pouting face to the side. “O-okay. Aki-C-c-Chan.” “Yay!” She snapped back to her normal mode. Time to play!” She ran energetically to the entrance to the crane game room. “This girl is gonna be the death of me.” Sora sighed to himself. Suddenly, he felt his phone buzzing in his pocket. He pulled it out. Bookmark here

“Are you coming, Sora-Kun?” Aki called to him. “Uh, yeah!” He yelled back. “I just gotta take this call. You can go ahead, I’ll find you when I’m done.” “O-kay!”Bookmark here

With a feeling of dread, Sora hit the green button. “Yes? This is Sora.” “You! Dumb-ass! What are you trying to do? Didn’t you remember the plan? You were supposed to string her along with a fake confession and crush her heart! Not take her out on a date!” En-Kun raged. He was clearly very pissed off. “Where are you guys now?” “We all went home! You blew it! Our one chance to pull an epic one-over on The Gal, and you ruined it! You really are a worthless idiot!” Bookmark here

That being said, he had no clue why the heck she wore such a revealing uniform and let her giant thingamabobs hang out of her shirt. Her appearance seemed to be misleading compared to her personality. He just couldn’t trust the popular opinion of Aki anymore because he had already found an inconsistency in it. His friend’s glib prejudice and bigotry made him want to barf. He took a deep breath and let En have it.
Bookmark here

“Really? That’s all you got to say? That’s what you care about? A stupid prank? You’re sick and cruel, En-Kun! Aki-Chan is nothing like what everyone thinks! She likes anime and games and cute stuff! She’s overly friendly, but she isn’t a slut! How could you even think about manipulating someone’s feelings for your own joy? You disgust me!” Sora snapped at his friend.Bookmark here

Sora had no clue why he was defending Aki, much less why he was yelling at En. Ever since they were kids, he was always a follower. He did whatever his buddies told him to do. En-Chan was the defacto leader of the group. He was intelligent and a born leader, but he was also extremely  prideful in his own talents and abilities. Sora had never dared challenge his educated commands. before. He normally would have been sickened by the idea of yelling at one of his friends, but something he couldn’t name had changed within his relationship with his friends. This supposed prank…it was very unsavory and degrading to Aki’s character, yet they stood by it with pride. Bookmark here

“Aki-Chan?" En-Kun sounded incredulous."Sora, listen to me!” he ordered. “ She’s seduced you! She’s just using you and stringing you along! Please, just end this foolish date and come over to my place! She isn’t good for you, Sora!”Bookmark here

Sora stared at the phone. He sensed that this was a crossroads. For the foreseeable future, he had to choose between Aki, who had understood him better in five minutes than his friends had in seven years, or the friends he had had for his whole life. He hesitated for a moment. “En-Kun?” “yes, Sora?” En answered with a tone of superiority, sure that Sora was going to agree with him.Bookmark here

“Buzz off.” “What did you just say to me?” En demanded. “This isn’t a date, I swear!” Sora insisted. “I’m going to play games at my favorite place in the world with a friend who accepts me for who I am! I’m sick of you guys always teasing me and cutting me down! Call me when you guys are ready to be decent humans!” “Wait! Sora! No, don’t! Don’t do t-“ Sora hung up.Bookmark here

He sighed and went off in search of Aki. He found her struggling with the controls of a plushie machine. “Come on, come on! You darn thing! Noooooo!” She pounded on the controls as the oversized, rainbow-colored penguin slipped from the claw’s grasp. “You shall not defeat me!” She shook her fists at the machine. “The Fwuffy thing is mine!” “Aki-Chan, what are you doing?” Sora asked. Aki swiveled around in red-faced embarrassment. “Ummm…not that it’s any of your business, but I really like plushies, okay?” said in annoyance, crossing her arms across her gigantic chest. “Can I try?” “Be my guest.” “okay.”Bookmark here

Sora slid his money into the slot and hit the go button. ‘Okay, the one in the center is the easiest to grab.’ He thought to himself. ‘Over to the right.’ He moved the joystick. “Ack! Too far! Over to the left! Back to the right again! Just a little more…perfect! Now I need to move forward!’ He glanced at the timer. Bookmark here

‘And fast!’ He quickly moved the controller forwards and backwards, trying to aline perfectly with the stuffed toy. ‘Okay, the two pinchers should be able to scoop it up in such a way that it can’t fall out!’Bookmark here

‘crap!’ Sora aggressively pushed the drop button. ‘Come on, come on! Gotta look cool for Aki-Chan!’ He silently prayed. The claws closed around the penguin. Would the toy stay in its grip? It began to retract, taking the animal with it. Sora silently held his breath. The crane reached the drop area and sent the penguin sliding down the chute. Bookmark here

Congratulations! You are a winner!Bookmark here

“Yes!” “Oh, my gosh! You did it, Sora-Kun!” Aki clapped and jumped up and down in joy. “Yeah. It was just sheer luck, though.” He said humbly as he retrieved his giant prize. “I believe this guy belongs to you?” He held the plushie out to Aki. “What? Really? For me?” “Well, yeah! What would I do with a stuffed animal? I just wanted to beat the machine because it seemed like a challenge.” Sora explained. “Besides, you’re the one who was attacking the machine because you wanted one of these so badly.” “Yay!” Aki grabbed the plushie and hugged it tightly. “It’s so fwuffy-wuffy!” she cooed. “You’re the best, Sora kun!” “It’s no big deal. It’s just a stuffed toy.” Sora deflected as he internally did a happy dance.Bookmark here

“Let’s go see what else there is here.” “Okay, sounds good, Sora-Kun!” They wandered around trying to settle on a machine to play next. There were way too many good options to choose from! “Hey, wait a minute!” Sora screeched to a halt. “What?” “It’s a licensed Ripple from Magical Girl Raising Project! This figure usually costs over 22,000 yen!” Sora pressed his face to the glass. Bookmark here

“You like magical girl anime, Sora-Kun?” Aki asked as she brushed her hair behind her ear. “Well, some of it, anyway.” Sora shrugged. “I’m more of an action fan. So, Magical Girl Raising project, Magical Girl Lyrical Nanoha, and Magical Girl Site, yes. Precure and Card Captor Sakura no.” “ But the cute ones are the best!” Aki protested. “Not that some of the darker deconstructed series’ aren’t good, but the whole point of the genre is to be cute and hopeful! A perfect magical girl series is dark, but not too dark. Like Lyrical Nanoha. It’s got good action and drama, but it isn’t full of gore, excessive despair, or existential crisis’s.” “Well, we are on two totally different ends of the spectrum, Aki-Chan.” Sora rolled his eyes. “I might watch some of that cutsey stuff occasionally, but I’m not into it the way you are. You are into it because it’s cute, I’m in it for the storylines and creativity of the writers. As long as the animation isn’t total crap, I could care less about the aesthetics.” “Oh, whatever!” Aki rolled her eyes back at him.Bookmark here

“You gonna try it?” “Yeah. I’m going to win this figure for sure!”Bookmark here 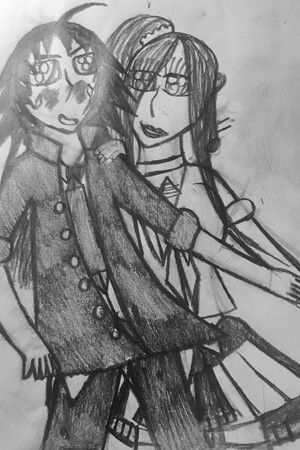 Somehow, I fell in Love With My School's Biggest Gal!