Ashes of the Unforgettable / Discontinued

"???: After all this time separated.. You have some nerve to come to this unholy land.. Hideaki.. Ishikawa!"Bookmark here

(The man lands on some rubble and stares at Hideaki.. He points his sword at him while the swords blade glows with weird markings that are engraved on it.. Hideaki gets on one of his knees and looks at the ground..)Bookmark here

"Hideaki: Why did you have to destroy my homeland.. We had nothing to do with your plans.."Bookmark here

(He takes a glass shard from the ground and stands up.. He looks at the person and then cuts his hand open with the shard.. The blood pouring from his hand turns into a blade and he gets in a stance and faces him directly.. He charges his sword with his blood and charges at the person, but then everything goes to black...Bookmark here

It was an pretty sunny day in Tokyo , Japan.. The world has been at a constant threat after the 2nd and hopefully last Trait War... The world as we knew it back in 2014 has changed.. Trait population has skyrocketed to 20% of the world population and the so called.. Hybrids are still 0.001% of the Trait population..Bookmark here

But ever since the "4th Trait God" Kikuchi changed the way Traits mutate and grow in strength.. It isn't anymore about the persons will to fight or their weaknesses.. The powers grow on their own.. Well.. The researchers think that's what he did..)Bookmark here

(A sharp feeling is in his head and he suddenly opens his eyes.. It's his doctor.. He looks around and realizes he is still in the hospital..)Bookmark here

"Mr.???: Your diagnosis came in.. You seem to be one of the lucky few who have recovered from the trait mutation. You're officially 100% Trait free!"

(Hide smiles and closes his eyes.. The doctor sighs and proceeds to read the file..)

"Mr.???: There's also bad news.. There is a chance that the mutation might return and then you might lose your life or you might not be the person you know right now.. That's all.. You're free to leave the hospital.."

(Hide gets upright and then stands up.. His legs feel a little wobbly so he supports his weight against a cabinet next to the bed.. He inhales deeply and then grabs his bag and gathers enough strength to walk out of the door.. An unfamiliar face walks up to me and holds me tight in a hug..)

(The girl suddenly kisses him and then looks at him.. Her faces blur starts to uncover.. It was his girlfriend.. Well It used to be.. Something seems weird about this world.. Wasn't he just in a battlefield with one of Earths strongest warriors.. He tries to walk away from her grasp, but she keeps holding on..)

(The girl lets go and Hide walks to the exit of the hospital and walks out.. The city looked intact.. and not destroyed.. Hide rubs his eyes and then checks his phone.. It's 19th of May 2022.. Exactly the same day the attack happened.. Hide quickly cuts his hand slightly... He couldn't use his trait anymore.. He looks around and everything seems normal.. Too normal.. He spots a bus stop and then walks to it and exactly when he arrives at the stop his bus comes.. He walks in and it's completely empty.. The only person in there is the driver.. Hide sits down and then waits for his stop.. A few minutes pass and he finally arrives at his stop and walks to his apartment.. He walks inside and then he sees a familiar face sitting on his couch..)

"Jeron: And you remember my name too huh.. Even more interesting.."

(Hide walks to the couch and sits down.. He grabs the remote and turns the television on.. It's static.. All the channels were static..)

"Jeron: Hideaki.. I don't exist in the real world.. I can't interact with anything anymore."

"Hide: Oh right... You're basically a ghost that's in my mind.."Bookmark here

(Hide throws the remote at the TV and the screen breaks.. He lays down on the couch and pushes Jeron off.. He closes his eyes and falls asleep.. He doesn't even feel like a minute passed and his alarm starts blaring.. He opens his eyes and he feels like he is going slowly insane.. His eye slightly bleeds.. He stands up and checks his school bag.. It has the stuff it's supposed to have..)

(Hide walks to the kitchen and grabs a piece of bread and walks out of the door.. It's another beautiful day.. A lot of people are on the street and sees a few familiar people too.. He takes his phone out and sets a route for the train station.. He puts on his headphones and starts listening to the news..)

"???: Today it's another beautiful day in Tokyo.. There's a huge chance that that will change because there is a huge storm coming towards the whole country.. In other news.. 3 people were found dead near the old meteor crash site.. It is believed it's a mutated trait user but it isn't confirmed yet.. There was a massive train crash near Hiroshima.. The reason for the crash is unknown, but the driver said that he saw a weird figure on the tracks and then suddenly they derailed.."

(Hide arrives to the train station and buys a ticket and walks around and sees Jeron sitting down.. He walks to him and kicks his leg..)

(Hide hears the announcement and then runs.. Jeron stands up and starts to follow him.. Hide arrives to the platform at the last minute and runs onto the train.. He sits down and then looks out of the window and sees a mysterious figure staring at him with a weird aura... The train starts to move... Hide looks at the roof of the train and raises his hand up and forms a fist...)Bookmark here

"Hide: This is a new chapter for me... For the rest of the world.. Even the strongest of opponents always has a weakness.."Bookmark here

(To be continued...)
Bookmark here 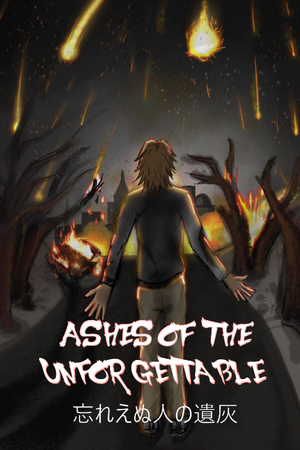 Ashes of the Unforgettable / Discontinued