In the hall of the Mountain King.

That was the fairy tale, the children’s rhyme. The story they told in hushed whispers around the campfire. Everyone knew the myth, though the exact origins of her immortality differed from region to region and from person to person. Bookmark here

In the forgotten forests, they say Amoria was a guardian of the grove, the greatest amongst them, who gave her life defending the green. For her loyalty, the Druid Gods gifted her with eternity. Bookmark here

Across the isle, Amoria was a cautionary tale. A thief, drunk on dreams of divinity, that challenged the waters themselves to a game of dice. But the waters need not gold, and the thief foolishly wagered the one thing she held claim to: her death. Bookmark here

Over the thousand stories, Amoria wore a thousand faces and lived a thousand lives. She was a princess in one, and a beggar in the next. The mother of sin, and the angel to bring salvation. The only constant was that one phrase.Bookmark here

“Is it true?” asked the King, sat upon a throne too big for him. He was a decade shy of manhood but his voice filled the lonely hall. Bookmark here

“Charlatans have stood where you stand now. It is not uncommon for a desperate mother to claim herself the immortal, if only to court a few coins for her hungry child.”Bookmark here

“Is there another way to prove myself? Would you not rather see me breathe fire or bend steel?”Bookmark here

“I cannot die, but that does not mean I cannot feel the sensation of death. It is a pain I would rather avoid.”Bookmark here

The King shook his head. “Magicians breathe fire and bend metal, but only Amoria is immortal.” Bookmark here

He tried to sound condescending, as every king should, though underneath, Amoria could hear his subtle zeal. Though he was a king, he was still a boy. He had a curiosity and wonder for the fantastical, as every boy should. Bookmark here

Amoria stood and plucked her sword from its sheath. The white blade sang as she moved it through the air and guided it to her neck. At this point, the boy King could not hide his marvel. He leaned forward, eyes wide, teetering on the throne’s edge. Bookmark here

She pushed the sword inwards; slowly so that there could be no confusion. She felt it carve through her flesh, lodge in her throat like a fishbone, then break through the other side to meet air. Bookmark here

“Is this sufficient?” she asked.Bookmark here

The boy could not stop smiling. “You are Amoria! You are! The deathless, the everlasting!”Bookmark here

“Would his majesty like to see anything else?” She slid the sword out. Muscle and skin moulded over the wound like clay until not even a scar remained. “I can beckon the mountain above us to quiver at your behest, or the passerines to sing for your good health– ”Bookmark here

Her lips froze. The throne was empty and the boy was before her. Even with her slight hunch, he had to tip his head to meet her gaze. Before she could speak, he knelt. One hand rested on her knee and the other raised to cup her chin, though he could not reach it. The pose of supplication. It was meant for beggars and peasants, the ultimate gesture of humility, and bound by the laws of the mountain, she must hear his plea. Even Amoria had made it many times, but for as long as she had lived, never had a king taken the position. Bookmark here

“No,” she said, barely a whisper. “You cannot.”Bookmark here

“I must, and the mountains bid you to hear my request. Even the deathless is subject to this tradition.”Bookmark here

He was right, and so she waited for him to continue.Bookmark here

“My forefathers carved this mountain,” the King said. “Perhaps even before you became immortal. They made it the home of my people and we have stayed here for eons, for the mountain provides for us. But the mountain is dying.”Bookmark here

“The mountain is a beast of its own, like a horse or a wolf. I cannot tame it, and thus, my people suffer. The mountain’s milk runs dry and the fruits of its stone rot. So I beg of you, Amoria.”Bookmark here

He dropped his head and pressed both hands against the cold floor. It was supplication no longer, but rather the pose of worship. “I beg of you. Save us.”Bookmark here

Amoria gripped him by the arm and lifted him before his head could touch the ground. The pose was incomplete.Bookmark here

“Why do you lower yourself so?” she asked. Bookmark here

“Because I am the weakest king of my lineage. I am young and inexperienced and sickly, and this is the only thing I can do to protect my kingdom. I have nothing to offer you but my pride.”Bookmark here

“Then I understand the pose of supplication, but worship and prayer? Though I am deathless and eternal, I am no God. I can breathe fire and bend steel, yet I am still bound by the laws of this world. I cannot bring you good harvest, or bless your soldiers in war. I am flesh and blood.”Bookmark here

“But flesh and blood all the same.” Amoria gripped him tighter. “You are better off giving your offerings to the groves or the waters. They can answer your prayer where I cannot, for I am no god.”Bookmark here

She expected him to hesitate, even for a moment, for it was only human to doubt. Instead, he ripped his arm from her grasp and his head pressed into the ground. The pose of worship was complete.Bookmark here

“You are to us,” said the mountain king.Bookmark here

There were a thousand things she might have told him. He was still a child and a particularly foolish one at that. Only foolish children still believed in the myth of Amoria, and only the most foolish amongst them would entrust the fate of thousands to a fairy tale. How could he be so stupid?Bookmark here

Amoria’s lips parted to speak those angry words. She wanted to see him hurt, to show him the pain of reality. As a burnt child fears fire, perhaps he would be a better king for it. Bookmark here

But when she tried to talk, she found that she could not. His body was shivering, and his chest rose and fell shallowly with every breath. The journey from the throne to her was enough to exhaust him, and the cold of the ground was enough to leave him freezing. Bookmark here

Something shifted in her then, like a thawing river in spring. Bookmark here

“Do you not bring offerings when you pray?” she questioned.Bookmark here

“If my pride is not enough,” he said, “you may ask anything of me. If it is within my power, it is yours.”Bookmark here

“Gods are arrogant creatures. Even the god of harvest is rarely satisfied with an offering of fruit, and to be deathless is a dark magic. If I was a god, would I not be the cruellest and most vile of them all?”Bookmark here

She pulled at his chin, tugging his face to hers. He did not resist. Bookmark here

“What would you say,” she proposed. “If I demanded to quench my thirst with the blood of mountain kings?”Bookmark here

Finally, Amoria saw the precipice of panic in his eyes. He was old enough to understand his mortality and young enough to fear it. Bookmark here

“You asked me to save your people,” the immortal said. “So you must understand: giving life is the most arcane and powerful of all magic because it is the progenitor. Only death is its equal. That is why you must die.Bookmark here

“However, your death cannot be quick either. Death may be the equal of life, but pain is its antithesis. Tell me, how old are you?”Bookmark here

The boy struggled to get his words out. “Ten.”Bookmark here

“Ten years of life you were gifted.” Amoria lifted her sword and rested it on his shoulder. “So not only must you die, your death must be most torturous. A pain so great, it encompasses a decade’s worth of existence.”Bookmark here

She smiled. “Not for a mortal.”Bookmark here

He did not blink. “And my kingdom will be saved? You swear by it?”Bookmark here

“Of course not.” She watched the boy’s despair grow. “If a god granted every wish, we would have no famine and war.”Bookmark here

He closed his eyes. “But it will help?”Bookmark here

“A worthy offering may sway the odds in your favour, though it is never absolute.”Bookmark here

“I understand.” His expression was so genuine, she could easily read his thoughts: if it helps my people, that is all that matters. “If the cost is my life, then it is a bargain. Do it. Strike me.”Bookmark here

“No. You must do it yourself.”Bookmark here

Immediately, the King wrapped his fingers around the width of the sword. He dug deep, as much as his delicate frame would allow him, and Amoria’s white blade leaked crimson. Slowly, he wrenched it until the sword-point was at his neck, the same spot Amoria had stabbed herself. Bookmark here

The King took one long final look at his mountain hall. Crystal lamp hung high from the rocky ceiling. Against the dark stone, gaping at their yellow lights was like stargazing in the open plains. Even thirty thousand feet of stone could not stop one from witnessing the beauty of the night sky. Bookmark here

There was no pain. No wound, other than the ones on his palms. The sword was gone from his hands. Bookmark here

“It is done,” said Amoria, sheathing her weapon. Bookmark here

He blinked. “I do not understand.”Bookmark here

“I have told you already. I am no god. I have no power beyond the simple magics, no domain to call my own except the salt that belongs to all men. I take no offerings as I can fulfil no prayers.”Bookmark here

“But…death and pain. The magic of life. Were they lies?”Bookmark here

“They are truth. There is powerful magic in death and pain, but as I possess no divinity, I have not the capacity to harness them.” She pulled out bandages from her coat pocket. “I only sought to test your sovereignty.”Bookmark here

Amoria held his hands with all the grace one would use when caressing rose petals. She began to apply the bandages to his wounds. “To the east, the Great East, where is a winter that never ceases. There, where no other life grows, blooms a single flower once a year: a peony, said to bring reclamation. I will help you find it.”Bookmark here

“So you’ll help us?” beamed the boy. Bookmark here

“You are still better off praying to real gods, but if you insist on the assistance of an old woman, I will grant you it. Remember though, I can give you no guarantee and for that I am sorry.”Bookmark here

He shook his head. “No, that is more than enough. You have brought hope.”Bookmark here

When she finished bandaging his hands, she said, “there is another thing I must tell you.”Bookmark here

“Speak,” said the King. It was a request and not an order.Bookmark here

“You may be young and inexperienced.” Amoria the deathless knelt before him, one arm across her chest. “But you are the greatest king I have ever known. Do not let another soul tell you otherwise.”  Bookmark here 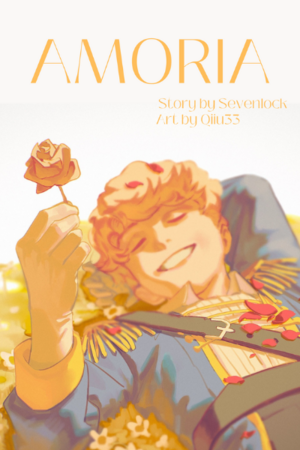