The battle at the courtyard of the Lord Haya’s manor raged as the paladin squads desperately tried to contain the monsters their target person summoned. While they managed to kill some of the creatures, the paladins also suffered casualties, mostly from blunt injuries. Nevertheless, after almost a day of hard fighting, the human arms prevailed, and the paladin guards set up a defensive perimeter facing the demon noble’s home.Bookmark here

Though they possessed the means to force their entry inside, the Dame Atkins opted to wait for the reinforcements she requested, coming from the Holy Palatial Gardens. Considering their casualty count, and the possibility of encountering more hideous creatures in the manor, the Paladin Guards vice-captain deemed it was a prudent measure not to waste her girls’ lives and limbs in futile assaults.Bookmark here

However, in contrast to her, the spymaster Umberto Benicci was adamant and kept urging the paladins to break in, and pursue the ‘Knights’ leader.Bookmark here

“We have him trapped in there, Lord Benicci,” a paladin squad leader reasoned. “What’s the use of incurring additional injured when we have him surrounded?”Bookmark here

“You don’t understand how that demon thinks,” Umberto backed her. “I’m sure he had already foreseen and thought of countermeasures to our movement. Look, instead of running to his carriages when we attacked, he went inside his manor. A normal person would do the otherwise, if there’s no other plan of escape in place.”Bookmark here

“Don’t worry, Lord Benicci, we also thought of that possibility,” the squad leader reassured him. “Our captain, Lady Henristone, ordered three squads of paladins to block the Chersea-Cherflammen crossing. This, and we’re also cooperating with the demon forces stationed there, as well as with the Nerfes army. The Lord Haya of House Usarved, though he may have a few tricks up in his sleeve, would have to run the gauntlet to reach Cherflammen.”Bookmark here

That silenced the spymaster, for he deemed the answer quite satisfactory. After all, the Paladin Guards were no fools. Blocking the only route out of Chersea was surely a sound strategy, saving them both time and effort in pursuing their target.Bookmark here

Nevertheless, Umberto’s unease never left him. As his eyes wandered around the looming manor, the spymaster couldn’t help but suspect something was awfully wrong going on inside.Bookmark here

After all, it is way too quiet ever since the battle at the courtyard ended earlier…Bookmark here

The next day, the stillness of the surrounding forests near the Lord Haya’s manor was broken by several trumpet blasts that echoed from the direction of the Holy Palatial Gardens. Most of the paladins were still sleepy, but they were quick to their feet and their armors. Everyone knew what those signals meant: Her Holiness, the Great Saint of Chersea, Madelaine Ann Rubinforth, was coming.Bookmark here

Soon enough, she appeared in her armor, riding a white war steed, and followed by a long entourage of paladins and soldiers from Nerfes under the overall command of the Duchess of Henristone. To her flanks were the Beastman Saint, in her wolf form, and the Saint of the Flame, hovering to her right.Bookmark here

The moment they reached the defensive fortifications outside the manor, the paladins with their vice-captain knelt down, save for the spymaster, Umberto Benicci. He only gave a light bow to his goddaughter. Maddie knew that he never intended to show any ‘full’ respect to her; nevertheless, she didn’t mind it. Not only that, she was aware of her sins to him, she also didn’t want to disrupt her cooperation with Seirna by minor inconveniences.Bookmark here

“Your Holiness,” it was the Dame Atkins. The paladin vice-captain handed her a scroll, which contained her written reports on what transpired on that battlefield for the past few days.Bookmark here

Maddie quickly read the report, then passed it to Lady Henristone. She asked the Dame Atkins, “So we have no other choice but to assault that manor over there?”Bookmark here

“Yes, Your Holiness,” Umberto was the one who answered. “If I’m not mistaken, the leader of the ‘Knights’ is inside. There’s no one here who escaped our attack, though I highly-suspect that the demon noble has an underground path, which he could’ve used days earlier.”Bookmark here

“Even if he did that, we already placed paladins at the Chersea-Cherflammen borders, spymaster,” Lady Henristone reiterated. “They are reinforced by units from Nerfes’ army, and is cooperating with the demon border guards.”Bookmark here

“Lady Henristone,” Maddie called her attention, “I think the Lady Seirna’s spymaster has a point to worry. After all, he’s the one who risked his life to observe that demon.”Bookmark here

The goddaughter and her godfather exchanged meaningful stares. Though he remained silent, Maddie was reading Umberto’s mind, and he was secretly thankful that she supported his efforts.Bookmark here

“So, what do you think, Maddie?” Ruro asked her. “I smell repugnant odors coming from inside that manor. Something is happening inside.”Bookmark here

“Must be the monsters,” Umberto muttered. “Similar to those we fought earlier.”Bookmark here

The Human Saint never uttered a word; she was pondering on her options. The choice to assault the manor was on the table, however, she was risking a bloody confrontation in which, her paladins might get injured or killed. If they let those creatures be, there’s a possibility that those might break out of that place and attack the unsuspecting populace.Bookmark here

Well, there’s the option of sealing the place with magic—Bookmark here

“I won’t do it, if I were you, Lady Madelaine,” Seirna finally spoke her mind.Bookmark here

“From what I can feel from inside the manor, those creatures…those monsters…they are originally humans and demons, and now they are turned into horrible monstrosities to serve the purpose of the leader of the ‘Knights’. And now, they continually suffer for their folly.”Bookmark here

“By your word ‘continually suffer’, you mean they are still conscious?”Bookmark here

The Saint of the Flame nodded, and never hid her disgusted expression, “They knew what happened to them, yet because of their new ‘bodies’, they cannot do anything about their thirst for flesh and blood. As such, we have no other choice but to end their misery.”Bookmark here

“But…” Maddie was surprised by Seirna’s suggestion, “…if we kill them it would strengthen the ‘Seductress’.”Bookmark here

“Indeed, it is. However, if we leave them alive, their suffering would continue, and add to her power all the same.”Bookmark here

Another round of silence. Everyone near the Human Saint anxiously waited for her decision. And then, taking a deep breath, Maddie steeled her resolve, and…Bookmark here

“Lady Henristone, please raze this manor to the ground. Make sure everyone inside is burned to death; use the flammable cannon rounds, just to be sure. No one from the inside will leave this place alive.”Bookmark here 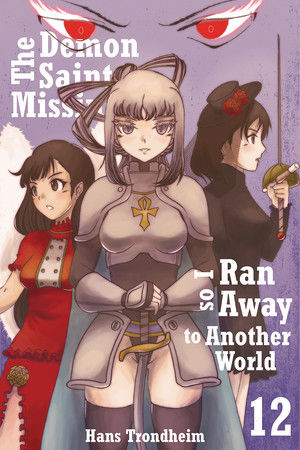