The Adventures of Camp Loruna

It was like any other day, I woke up, got dressed, brushed my teeth, and I went to the bus stop. The cold air blew against my face as I walked down the road, the sunrise blinding me. I was always early, having to wait twenty minutes for the bus every morning wasn't great, but I managed.

I usually just stand around on my phone, but today I went looking for rocks. I'm a big collector, but I haven't gotten anything new in a while. Looking around the bushes by the road wasn't the best method, but sometimes I came up with some cool rocks.

Today all I found was this cracked piece of stone with something engraved on it. It was pretty cool, but it seemed somewhat unfinished. I could only make out some of the drawings, most of it was writing in an unknown language. But there was one picture of a sword on the middle.

I was inspecting the rock for a minute when the bus arrived, earlier than usual. I hopped on, and got on the seat with my best friends. Claire and Matt were always there for me. Matt was fast asleep, Claire was reading.

She didn't even notice me until I sat next to her, her eyes never left that book. "Hey, good morning" she said without looking up. I just sat there in silence, looking at my phone for the rest of the bus ride.

After fifteen more minutes the bus finally arrived at school, Claire looked up from her book and woke Matt up from his slumber. We all shambled off the bus and stood in front of the school. We all hated it, I don't think anybody truly liked it.

Luckily winter break was soon, so there was barely any work. Matt groggily said "Hey, I found this cool rock at the bus stop. I thought you might want it." and held out a small stone. It looked identical to the one I had found just thirty minutes ago.

Claire then mentioned "Hey I found one just like that. It had a picture of a bow and arrow on it." and pulled out another stone. I brought out mine and said "I found one too, but this one has a sword picture on it."

"Mine has a scepter thingy on it." Matt said "So I guess we all have different stones." and he started inspecting our stones. We went over to a bench and put all the pieces on it, they kinda looked like they belonged together as a puzzle.

We stared at them for a few minutes, but then the first bell rang at school. We went to grab the stones and go inside, but they all attached to each other. They were connected in the shape of a disc.

We all got confused at that. Stones weren't supposed to fuse together like that, at least not normal stones. When we went to pick up the disc it started glowing, and I could see the shock and surprise on their faces.

Before any of us could say anything about it everything around us started dissapearing. Eventually we were just standing on a random white platform in the middle of nothing.

Then a hole opened up in it, and we started falling down an impossible distance. The rock was falling with us, but after a minute of falling the stone split back up into the three pieces we had. We were falling with three rocks and nothing to protect from the impact.

Matt started to fade, like he was glitching out of existence. He reached out to us, but all he was able to grab was one of the stones. He vanished clasping the rock in one hand and reaching out to me in the other.

Then it started happening to Claire, she started glitching out of existence. She reached out for one of the stones and for me. All she was able to get was a stone before she too ceased existence.

Then I looked down and saw the bottom of the pit fast approaching. Something in me was telling me to grab the stone, it was such a powerful urge I couldn't even try to fight it. I took the last stone, and braced for the impact.

But that impact never came, all that happened was I stopped feeling wind rushing past my ears. When I looked up I was in the middle of some forest, but instead of the trees having green leaves, they were blue.

All of this just because of some cool rocks. 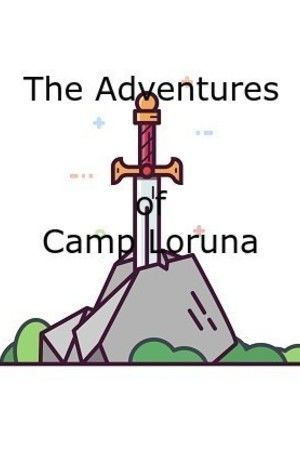 The Adventures of Camp Loruna