Kouji no B Movie

Kounji No B Movie (Creating a B Movie)

A star is born

As the bus moves a small accident occur and the bus suddenly stop everyone was push toward the front as the people were all yank to ward Kouji he slide on the center area and gave the girls a tap on their back keeping the m from being thrown toward the front saving them from dropping toward the floor.

Kouji: Sorry I was not looking don't worry I'm fine

Kouji, reach toward the strangers hand and was ready to grab it but in a split second the stranger grab his bag then ran away

Yes he was rob that was a thief

Kouji: what am I gonna do now?

Manager: it's gonna take a while to fix this kid sorry I guess we're gonna need to fix the whole shop so I'll just keep you on hold OK comeback after a we..

The sink just exploded taking out the register

With that Kouji said

Owner: I won the lottery yessss!!!! No more jobs for me I'm going to hawaii!!!

Kouji didn't say a word and walk toward his next interview

Kouji: it's already dark and this is my last job I guess I have to call back this one doesn't work

Kouji: guess this is it

He pointed at the sofa and spoke

Round guy: just relax and have a seat please call me Steve I'm the director of this company

Kouji: I'm Kouji Misaki nice to meet you I'm here for the job of being extra on your projects

Steve: have a drink

He started talking about the job that I was gonna do it was a extra on a movie he is making and as I look around the room I can seen Sci fi posters all around us and the spaceships and costume was amazing yet I never seen any of it came out on any cinema it must be a on video only sale in other words it a B movie production, he said he has a staple fan base so no worry his movie does sell

Steve: so are you interested the pay may not be that good but I'll be letting you live in our crew dorm with transport so you could go to school any time you want to no worry my schedule is flexible so are in?

Kouji: if you willing to add some box much lunch with that I would do any stunt you tell me to do

Steve: yes yes I see that's good so after you sign this contract their will be a bus waiting for you out side

Steve: yes yes time is money so please hurry my staff is being paid by the hour so if you mind

Kouji: the last panel has a smear of ink to it I can't read the words on it um wait this one seem to read danger?

Steve: oh sorry that was my bad this was a mist print it seem the printer print head is broken and no worry that reads to make sure your safe from dangerous accidents

He smiled and pointed at document again

A sound of horn was heard from out side

Steve: yes yes it came out nicely here you go that's your ID card please don't lose it their expensive plus it's your room key now now the bus is waiting please I'll be coming to the site after a hour I'll be setting the armada crew for our first recording

Kouji said thanks started walking towards the door

He smiled waving his hands

As I walk outside there was a bus waiting for me and looks like the crew was already in costume the alien driver looks awesome and the robot look so real and they even started practicing their line cause all I can hear was alien language it was so cool I think I'm gonna like this job.

This is Captain S3V DIOU

We are the guards men of this protected system V4U

This is not good earth is not ready for space yet

I guess this is the time to use the hero protocol

S3V: computer find the most clueless person on that planet and make sure he fits the requested by the Council

Commander: we are ready to gate behind the moon cloak field ready

Main base has detach from the space line belt

S3V: narrow it down to best combatant

S3V: find one that will look good on a military uniform

Commander: nothing sir um ..... gate out

S3V: computer link to the earth satellites and find our chosen hero

Computer: all information of the subject is now loaded into your brace fiber

S3V: Nice he fits the role well .. computer ready me a scenario that will allow us to recruit him in a minimum budget

The staff look at the captain with cold stares again

S3V: OK now the hero protocol was not give a budget by the Council cause they never think that anyone could past thru the space line so this special protocol will be deducted from my pocket money

Computer: target has left the vehicle and now on route to the learning facility opening a stealth gate subject is now on the training ground on the ship and is now set to mimic street area that the subject was taking route and now place on a loop

S3V: OK that a good start now what's next?

Computer: now the captain will go there and steal his bag

Computer: we are using the cheapskate hero protocol

Commander: but you never give us any bonus pay

S3V:but what about the cake?

Staff: that was from your ex wife

S3V: and the chocolate

Commander: that was from me

Computer: we confiscated that from a arms dealer

S3V: I didn't know that aaaaah fine but why do the captain have to do grunt work

Commander: cover your body with this please

He drop on front of Kouji bumping him to the ground

S3V: nice even with such impact he still OK we got a winner now for the bag

Kouji: Sorry I was not looking don't worry I'm fine

S3V: sorry kid this is for the sake of your race

He grabbed the bag started to run away

S3V: computer hurry gate him out

Computer:Kouji gate out gate in captain

S3V: it's not my fault the computer made me steal his bag

S3V: hey I'm the one gonna be paying him

Staff: sir why are you holding his wallet

S3V: well to tell you the truth we don't have any earth money so

He turn around spoke

The captain gate out while whistling

Commander: the cheapskate is on route ready the combatant on the drop ship equipment delta configuration OK let's finish this

The room was a hologram created to look like a producer office and there they made him sign the hero protocol contract with a special DNA pen that confirm the following contract.

Upon signing this the hero protocol is approved 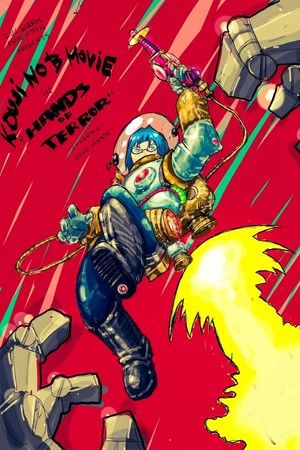 Kounji No B Movie (Creating a B Movie)