A poor game of Cat and Mouse

FICTION: If you held the power of god in your two hands, would you save the world? Would you doom it? Or would you watch from the sidelines, just as you had done before?

He inhaled, taking in a heap of smoke down his thick windpipe. Then the following exhale, calm and healthy, blew a mix of chemicals and carbon dioxide into the open air. The tobacco smelled cheap; not that he didn’t have the wallet for better quality cigarettes, but the foul taste and dry burn at the back of his throat was more to his comfort than anything smooth or fancy.

The man was well into his 60s; the type that made you think that he was too old to still be out working like this. And he must have thought so too, seeing as he was out on a smoke break in the middle of work. I wanted to spout something along the lines of “smoking is bad for you”, or “don’t you have work to do?” to him, but that would have been too out of character for me, now wouldn’t it? And it would have given my position away as well.

Plus, it was a nice scene to look at, watching him lean against the guardrail of a thin little walkway bridge while ignoring the hums and buzzes of his equipment, which had been set aside and unfolded from the briefcase it normally slept in. There was a very “noir” vibe to the setting, though I guess you’re probably more interested in “cyberpunk”, huh.

The man was overlooking the south Tokyo nightlife, in all of its glum, shadowy glory. Specifically the lowest column of the city, where illuminated signs advertised bars and brothels and the yakuza reigned supreme. It was what he did often, when starved for leads or ideas. Or at least that’s what I’d like to think, but I never really started watching him until he had been assigned to this latest job he was working on.

He worked for the Japanese Self-Defense Force. Or, more accurately, he was a long-time contracted private detective that had an office at the Ministry of Defense. With a lifetime’s worth of experience taking on highly classified cases of missing persons, unexplainable incidents, and other government-secret mysteries, he was tasked with his latest job: locating and keeping tabs on a superhuman being of near-infinite ability with no name, no face, and no trace of existence.

In the first place, how would you even know that such a being exists? How did the JSDF find out about them initially, and why did they need to be kept under such close watch? Well, when you’ve completed a puzzle using all of its pieces, but you still have a hole in the middle, of course that means that there’s an extra piece that must be missing, right? You just have to isolate “x”.

Or at least, that’s how the detective explained it in one of his reports. In more literal terms, he was referring to the other instances that they had already caught wind of. Superhumans of unknown origin, all with near infinite strength and physical capability, as well as their own individual abilities which seemed to defy the laws of physics. Nine had been catalogued in varying levels of detail by other internal government workers, and until recently, many more were thought to be spotted about. But this agent’s astounding intel had suggested that there was only one they still had not located.

“Ah, then your next job will be to find him.”

That’s what the higher-ups had told him.

The office truly was a free-for-all cold war, fought for pride and greed. To think that I was on course to become just another salaryman; a cog in the machine of modern society; just one of many millions that made the world turn. To be an outsider; an observer who neither added nor detracted from the world; was a far more suitable role for me.

I didn’t really understand it myself, but he was looking way down at the ground level, watching nobody or nothing in particular. Was he even really looking, or was the detective just lost in thought?

We were only standing at the bottom of the second column ourselves, so I couldn’t really say anything like “the humans down below looked like ants from where I stood”, though it would have been much more poetic if I could.

But from our level looking down, what I could see were creatures of the night, walking, talking, and living their own individual lives as they pleased. There stood a young couple in flashy clothes, fighting about something. An older man further down in an alleyway, stumbling and drunkly pissing his troubles away. There were a few Android prostitutes advertising outside of a brothel, and a younger human girl dragging another man inside.

I was slightly curious as to the context of that last situation and almost broke away to go see it for myself, but my train of thought was interrupted by the grumpy old man beside me.

Wow. He really said the line.

“All of the young blood get the easy targets. But just because the old guy’s got all this time and experience, let’s give him the one who’s quite literally untraceable; who’s got no leads and no proof of existence. Like some kind of quantum bullshit, only proven in theory.”

He took another puff.

“The truth is, they just wanted me out of the office; off their backs. It’s pretty damn obvious for a world-class investigator to tell when the new lead coordinator doesn’t like him. But, well, I’ve got my pride on the line. And that woman knows how to use peoples’ weaknesses.”

As I shifted my position, a rock hit my shoe and dove down to the lowest column, and hit a pedestrian on the head. Not that he nor the detective took notice.

His eyes had softened from their blanked-out state as he let himself rant freely and to nobody in particular. But when he had been in focus, staring out into the city as he did, it looked as if he wasn’t even human. The way his eyes tuned out and his pupils dilated outward, like he was making calculations in his head akin to how an android did, or even some sort of household robot.

It was difficult for me to understand that sort of thing. Since all I knew how to do at this point was observe.

He dropped his cigarette into a thin little cylindrical casing and pocketed it, as if he was going to save it for later.

What a frugal old man—though it was a bit ironic for me to be calling somebody else old.

“No trace, no scent, no fucking picture, even. They’ve given me all of this state-of-the-art bullshit to trace their “I-waves” or whatever, but it doesn’t help one bit. Do they even exist? Am I just going crazy, looking for the modern Bigfoot?”

He exhaled, this time just clean CO2, and let his frustrations release with a long, exasperated sigh. A sigh that wasn’t out of hopelessness of the case, but actually quite the opposite. Because the detective knew; his predictions were never wrong. He sighed because with all of his complaints and uncertainties vented into the open air, all that was left was his confidence.

He packed all of his equipment back into the little briefcase it came out of, and straightened himself out. Out of his pocket came a pair of american-style aviators. It was a 21st century design that you didn’t see as often anymore. Of course, they weren’t actually 21st century aviators, as those didn’t come with call, text, and unlimited data with two 4k transparent liquid crystal display lenses, as well as a whole slew of other technological features packed within a thin gold wire frame. Though, they weren’t exactly state of the art by modern standards, either.

With his thick, leathered fingers, the secret agent made a few gestures into the air, which initiated a call with his transcriber. He was a younger fellow, in his late 20s. A cubicle-worker type, with glasses, a tucked button down, and the like. Whatever stereotype you’re picturing beyond that description is probably more or less accurate.

“What can I do for you, Agent Silver?”

“I’m sorry Silver, the connection isn’t great. Could you say it one more time?”

He sighed again. This one was of frustration.

“Yes. Yes, I got it that time. I’ll take note. My apologies, though you do realize that these frequent connection issues would solve themselves if you were to just get an implant like everybody else, right?”

“You work for the government. You of all people should know why I haven’t shoved silicone in my skull.”

“But if you’ve got nothing to hide-“

“Keep it to yourself, Stanley.”

The detective tapped twice on his right temple, waiting to see a digital interface that he knew wouldn’t appear. Of course, if he actually had the implant, things would be a different story.

He then made another series of stupid gestures in the air to operate his stupid looking retro-style glasses, before folding them back into his the pocket of his stupid longcoat that was too hot to be wearing at this time of year.

A “hypocrite” is what they called humans like that. Or you could go with “typical Gen One”. Well, it’s not like I’m so perfect either, despite my immortality.

In fact, I enjoyed watching the world-class detective codenamed “Silver”. It felt like a leisurely game of cat and mouse; that is, if the cat was deaf and the mouse was invisible. Perhaps I just latched onto the idea that even a single human, with all of his deductive talent, had been able to acknowledge my existence. Even if he couldn’t perceive me nor my actions, I could see it in his blank stare; that he knew I was waiting for him to find me. It was a special bond of sorts, between predator and prey; detective and criminal.

Not that I commit crimes, let alone interfere in the human world at all really. Though, considering some of the others, I suppose I’m guilty by association.

But for me, who had sworn off interference with the natural world, you could call it a loophole, where I’m allowed to be acknowledged. One that will persist until he gives up and retires.

And then I will be truly alone, once again.

I haven’t properly introduced myself yet, despite our time together. For good reason, I might add.

I am the Observer.

And for a long while now, I’ve been your point of view. Well, that’s just from my frame of view. For you, our relationship is likely just beginning.

But leave that detail aside for now.

Well, I guess I don’t mind it.

It might not be exactly how I intended to observe life and its wonders, nor what I expected things to come to, but I can’t exactly reject these circumstances either.

So I hope you’ll bear with me until the end of the world.

Because this, too, you could call a loophole. 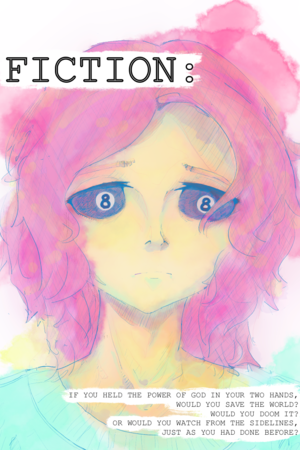 FICTION: If you held the power of god in your two hands, would you save the world? Would you doom it? Or would you watch from the sidelines, just as you had done before?