It is June in the beautiful US of A.  Trees are greening and certain flowers are yellowing as the parking lot of a local concert venue fills with the metallic shine of domestic cars. Neatly arranged in etched yellow lines, hordes of well dressed middle-aged and elderly people emerge from their sedans and SUVs with comments about the large amount of other sedans and SUVs as well as how well the blue sky matches the white gowns of the streaming crowd of girls with ashen painted faces.

These individual cars often contain something called a "family," and they are here, at this local concert venue in the US of A to watch a part of their "family" walk across a stage to collect a piece of paper and a shake from a sweaty hand. One specific family has met with a white gowned girl and droplets of water have already begun to stream from their tear ducts. She is there to obtain a device that will hold her hair up in a more static way in order to increase her attractiveness. Smiles spawn from her proud parents who wish her luck and say "you're gonna do great, sweetie."

The whiteness of the girls' hair clip is what really grabs my attention as I stroll to the congregation of graduating students in their gowns of white and blue. I don't stare at the family as I walk past them, I simply examine them out of the corner of my eye. I've gotten quite good at that, examining things without being seen, I mean.

My focus is interrupted from a much closer sound to my right as some goon in a blue robe pushes his lips together and blows air through them so that a loud noise resembling a fart explodes from his mouth. The sun seems to shine even brighter as he proclaims to that family and whoever else is in earshot: "Oh no, I think I just shit myself."

I can't hide my harsh laughter as we hurry to designated spots in the line of students with the eyes of all those who heard the outburst burning into our backs almost as if we have ruined their child's, nephews, nieces, whatever's big day.

The remainder of the evening is a sequence of images and impressions of soon-to-be "adults" nervously talking and walking, a poor rendition of Pomp and Circumstance by people who will be in our shoes in a year or two, and scattered applause as names are read and teenagers trip across a stage.

I should make it clear that the more notoriety a teenager has, the louder the applause for their name being read seemed to be. I listened to the applause of those I knew and didn't know as the A's finished, then the B's, the C's... I think you know the rest.

"This is so fucking stupid," I thought to myself, "wasting hours just to get a degree that could be mailed and pretend like you matter." Yet as the alphabet descended towards "M" my brain turned to another direction.

"How much applause will I get? What will my family think when they hear how little applause I get? Holy shit that girl is hot."

Sweat beaded on my forehead and I may or may not have been slightly shaking as I made my way in a slow moving, single-file line also known as the ascension to adulthood.

The monotonous monotone sounds listing off the names grew closer and closer to mine. My shaking had only worsened and had reinforced a thought I had born unto myself years before.

Yet with a slight, genuine smile I walked across the stage as "Lucas Mitchell" was read aloud. Right then and there, I had entered the Valhalla of adulthood with very sparse claps and the cries of a baby, not too sure what was going on.

I looked out at the seated crowd and matched eyes with some people I recognized--my smile only growing as my look was met with a raised middle finger and a mimed suicide by gun.

Like how life supposedly flashes before your eyes right before you die, memories of the four years I had spent at South Lake Public High School filtered in my brain. Whether they meant anything or not, they happened and now all I could do was look back and think about them.

The people, the feelings, the experiences that got me to this point clumsily arranged in a discombobulated set of feelings that sucked me into days I had just passed.

Here are these days, the days of losers. 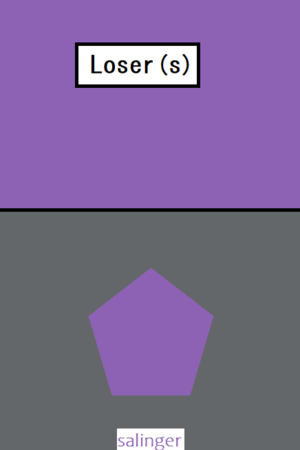