The brightest of ideas

"Man, it'd sure be nice to have five girlfriends."

Walking down a dimly lit high school hallway together with his best and only friend, idly chatting about things both of them knew wouldn’t happen, Koike Aito chose this particular moment to express the desires he’d kept hidden within for the past year.

Aito raised his hand to stop Ishikawa Riku - the name of Aito's only friend - and correct him before he could go off on a too long tangent based on his incorrect interpretation of what Aito just had said. One girlfriend or five, either way it seemed unlikely to happen, but it was important that at least his level of ambition be properly represented.

"Five. I said five. Not one, five. It'd be nice to have one, but five would be even better, and you know? Just one sounds so boring. Lacking in ambition. So what if I haven’t had any before, and so what if I only have one friend? We both know miracles can happen, right? So there’s nothing saying we won’t be able to make one happen too, right? We could even work together to get five girlfriends, then split them between us and have two and a half each. What do you think?”

"Yeah, that sounds great and all, my man, but I have absolutely no idea what you're suddenly on about."

“What? You’ve got a problem with that?”

“You seriously don’t get the problem with what you just said?”

“No, Riku, you’re the hopeless one. Don’t you have… I don’t know. Fantasies? Dreams? Ambition? An imagination?”

“I guess not,” Riku shrugged.

“Well, then I’m going to make up some things for you, and wherever you feel like that lacking imagination of yours is going to be a problem you can just substitute something from mine instead. Like, let’s say that you're trapped in a locked room and you have your little sister, your childhood friend, a cute classmate, and uhmm… your mom with you. Then-"

"Dude, just stop. How would I even end up in a scenario like that? Maybe you get off on ranting about your weird fantasies to people, but do you really have to do it with me? And now? Like, really? You're going to spend all day telling me about all these impossible fantasies you have and then… what? Is that going to help you somehow? How's that gonna bring you any closer to even getting one girlfriend?"

Aito stopped. Turned towards Riku, put his hands on his shoulders, and stared him straight in the eyes with a deep, longing gaze. Normally he’d get mad at such an obvious provocation, as he had the last ten times it happened, but this time Riku had said something too profound to ignore, and anger made it all too likely to forget the things that mattered.

"You're right. Why are we just talking about this when we could be taking action? Come on, let's go get some b-"

Aito’s eyes sparkled in adoration. Meanwhile, Riku waved his hands towards Aito trying to secure a safe distance from the certified creep pretending they were having something worth calling a conversation while really just rattling off whatever came to his mind without giving a rat's ass about if his "friend" displayed the slightest shred of interest in the subject. Riku could only sigh.

"No dude, I'm not saying I'll help you. I'm saying I need you to get down from whatever cloud all those fantasies of yours come pouring out of and get back down here to me, in reality, where you agreed to help me and my sister with her… well, I guess you already know that.”

"Good on you for finally realizing. That aside, can we-"

Riku stopped trying to get Aito off him for just a moment, and Aito took the opportunity to give his friend’s shoulders a thorough shake.

“About action. About how we should do something. Hey, I’ll wait on the roof, so why don’t you go gather some girls for me to ask out?”

“Why the hell are you expecting me to know a bunch of girls I can invite just like that?”

“Oh? You’re saying you can’t do it? What about your sister? If you’re the one that asks I’m sure she’d at least consider it.”

“Of course I can, but keep my sister out of this.”

“Oh, you better believe I will. I’ll prove it, alright. So hard you’ll regret you ever asked me.”

And just like that, with a wave of his hand Aito dismissed his friend, who rushed off to god knows where, determined to make him change his mind through the power of… girls.

The school rooftop. An open space empty of people, perfect for things you didn’t want to be overheard, or for just slipping away for a moment. A common place for confessions of love, breakups, and all kinds of other suspicious activities. At least in fiction. In reality, a mythical land not accessible to ordinary students in most schools, this one being no exception.

"Sure thing, my man. My father isn't the principal for nothing."

"Wait, you're saying he knows? Sure that won't be a problem?"

"Why are you suddenly chickening out now, dude? But nah, he doesn't mind, as long as we don't break the rules too flagrantly. You've never wondered why we haven't gotten in trouble yet?"

"Because nobody noticed us being up here?"

"Nope, big ol' daddy principal knows all about it. Doesn't mind either, though. As long as it's just the two of us, anyway."

"So what about the girls?"

"Don't worry, I got his approval for that too. And at least two of them, I don't think he'd mind being up here anyway."

Aito stood right in front of the entrance to the forbidden lands of the school rooftop along with his companion. A single push of a single door, a few steps outside, and all the girls he’d been promised would be right there.

If Riku could be believed.

Leaving no time for further hesitation, said friend pushed open the door and dragged Aito with him outside. Right as they got outside, Riku turned around, blocking Aito's view of part of the rooftop and also his way forward.

“Before you speak to the girls I’ve gathered for you, I’d like to propose a bet."

"Let's bet on if you'll actually manage to get five girlfriends or not."

"Yeah, sure. Anyway, how about one week from now as a deadline? Get five girlfriends before then or you'll lose."

"Now that, however, seems like an awfully short deadline."

"Dude, at least hear me out first before you agree."

"Ain't my fault that I've got better things to do."

“And that's my cue to explain anyway. If you win, you get to gloat to me all you want for the rest of your life. But if you lose, you’ll do whatever I say. But don’t worry, just once. So, you up for it?”

"Never mind that, what about the main event?"

"Coming right up! Without further ado, the girls!"

Riku stepped out of Aito's way, indeed revealing the figures of several girls standing on the other end of the rooftop. If his friend hadn't been so damn tall, Aito would maybe have been able to see them even with Riku in the way, but alas, as it was he could only now get a proper look at his prospective trophies. Not a healthy way of looking at someone you want a relationship with - even Aito knew that much - but admitting that, even if only to himself, would greatly diminish his overinflated confidence. And so, he chose to intentionally look at the whole situation through one of the crappiest lenses possible, that of a teenage guy who barely had interacted with a girl before in his life aside from his own sister, and at times his friend’s sister.

Thus his first words to address those gathered for his purposes were not the explanation they rightfully owned, nor a proper introduction of Aito himself, but instead only the words that should have come after both of those.

And as he asked, he was answered. By a lone, brave, and most importantly single teenage girl with shoulder-length red hair who stood before him.

Her inspiring words echoing through the air—

"What the fuck are we doing here?" 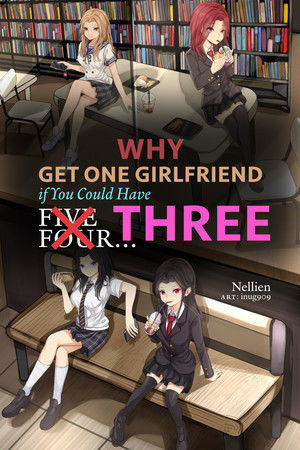