“I like fish! Nya-Nya! I like naps! Nya-Nya! I like milk! Nya-Nya! I’m a kitty cat! Nya-Nya!” Kammi sang the opening song of her favorite anime, Neko-Chan: The Amazingly Cute Cat Girl, and hopped the cracks as she walked down the sidewalk with her mother.

“I have lots of frills and a bell around my neck! Nya-Nya! My tail and ears are always adorable! Nya-Nya! Everyone loves me! Nya-Nya! I’m Neko-Chan, the amazingly cute cat girl!”

Alize Wood Smiled and swung the duo's entwined hands as they walked.

Kammi had just finished a look-see for a gig at a department store fashion show. The little girl had played on her mother’s tablet until the details and such had been hammered out. Then Kammi had been subjected to repeated tests of her modeling abilities, put in various outfits,  and forced to have her hair played with and cosmetics slapped on her. She then had to preform a few acts for the store owners and managers.

She had gotten the gig, of course! Everyone fell in love with Ai-Chan; they gushed over how cute and charming she was and adored her voice.

That’s not to say that Kammi hated being an idol. She found the singing and dancing to be fun. In fact, they were both very relaxing to her. It was the business side of everything she disliked. The constant socialization, having to act happy and energetic when she was exhausted and didn’t want to perform, no one really caring about her goals for the future, the focus on her appearance...but it wasn't altogether unbearable.

Unfortunately, not only was it kind of fun, it was the only talent that she really had. If Kammi couldn’t be Ai-Chan anymore, then what did she have? She would probably have to do this exhausting Love Idol Ai thing for the rest of her life! She didn’t have any other skills or interests that she could rely on. Her alter-ego was the identity that defined the course of her life.

In addition, her mother loved it when she was Ai-Chan. Her mother was a Japanese American who had adopted her from overseas. Her daddy was gone a lot, so mommy had gone on a relief mission trip to The Four Africa’s. She fell in love with Kammi, who was four, and decided to adopt her since the couple couldn’t have children of their own.

Alize Wood was a talent scout and desk clerk for a small entertainment business, but she had dedicated herself solely to her daughter’s career ever since she discovered her talent. She loved being Kammi’s manager and homeschooling her.

Kammi knew that her mother would agree to let her stop being Ai-Chan if she asked her. Mommy loved her a lot, after all! But mommy wouldn’t smile as much or be as happy if she wasn’t an idol anymore. Kammi’s feelings toward her job were mixed, but she liked making mommy happy more than she disliked being an idol, that was the one thing that she knew for sure.

“Hahaha! You are so adorable!” Alize laughed happily, swinging the duos tightly clasped hands “What do you want for dinner, Kam?” She asked as the mother and daughter walked amongst the evening crowds on the sidewalk.

“It’s ten-fifteen, so keep that in mind.” “Ummm…” Kammi though. “Can we go to that one ramen stand that is open late?” “Sure! It’s nine-thirty, and it will probably be pushing midnight when we get home, so you will be going straight to bed!” “Awwwww!” “Don’t ‘awwww’ me, Kammi-Chan!” Her mother teased sternly. “You got to play on my tablet for over an hour and we’re going out to eat! Be happy!” “Fine.” Kammi rolled her eyes. Even though she was only eight and a half, she was a master of sass and drama.

Kammi clutched her plush bunny, Mr.Usagi, tightly in her right arm as she hopped over the cracks in the sidewalk. She was wearing a long, ruffled, pink dress with spaghetti straps over a white long-sleeve shirt. She had white knit tights, gray Mary-Jane style shoes, and a pink hair-bow on, as well. It was chilly out, but not unbearably so; a beautiful, crisp Autumn night.                Kammi also had a plush backpack shaped like a purple unicorn on. Even though she was an idol, she was still just a little girl. She adored plushies, bunnies, honey, the color pink,
Neko-Chan: The Amazingly Cute Cat Girl, singing Karaoke, Mommy’s pasta, playing at the park, the animated princess movies that mommy had bought in America, and all things cute.

The pair waited at a crowed crosswalk for the walk sign to turn on. “Okay, we need to walk fast when this light changes, because we only have twenty-five seconds to get to the other side!” “Yes mommy.” As the two stepped out onto the crosswalk, an impatient businessman shoved Kammi aside in his rush to get to wherever he was headed. “Oh no! Mr. Usagi!” Kammi yelled, turning and pulling in the opposite direction.

A teenage girl in a pale-blue sailor dress knelt down and picked up the stuffed toy. “This this handsome little guy yours?” The girl’s dark eyes sparkled teasingly as she held out the toy. “Mr.Usagi!” Kammi sprinted back to where she and her mother had come from, dragging Alize behind her. The crosswalk light turned red just as the mother and child re-reached the sidewalk.

The teenage girl was tall and skinny and she had a spiky purple bob. “Here you go!” She held out bunny to Kammi. “Yay! Thank you!” Kami snatched her bunny out of the stranger’s hands and hugged it tightly to her chest. “Hmmm, this guy looks like a trouble maker!” The girl said, standing up. “There’s only one thing to do! You hold his left hand and I’ll hold his right hand! Now the little mischief-maker won’t be able to run away again!” “Oki-doki!” Kammi said happily as her and the teenager held the stuffed toy’s arms. They formed a four-person chain as they waited for the light to change again.

“What’s your name?” Kami asked as the group waited. “I’m Suzune Miyamma. Pleased to meet you.” She gave a small smile to the little girl. “I’m Alize Wood.” The woman chimed in. “This is my daughter Kammi. Thank you so much!” “Oh, you’re welcome!” Suzune stammered. “ It’s not a big deal.” The light changed. “Here we go!”

The group walked out into the street.

At the same time this was happening, Mikkari Miswa was waiting on the other side of the street after completing her snack run. For her, she was in an unusually happy mood. She couldn’t wait to get back online for the award ceremony! Usagi-Chan was the first real friend she had ever had, even though they only communicated online and didn’t even know each other’s real names. It made her happy, knowing that there was someone to talk to at the end of the day. The walk light flashed and Mikkari stepped out onto the crosswalk.

She brushed past the Wood family and Suzune, not even registering their presence. The other three also paid no attention to the plain young woman in dark clothes. The four passed by each other unaware of the fact their paths were destined to cross, that the wheels of fate were already in motion. These four young woman, though they were unaware of it at the time, were bound together by their shared fate. In this moment, this fateful encounter, they had entered onto the path that would lead them to each other and their shared destiny.

It happened in a moment; not a single person in the district had expected it. Before anyone knew what was happening, many lives were forever altered or ended.

The ground suddenly rumbled. Several loud explosions echoed from down the street. Before anyone at the cross-walk knew what happened, the street was blasted apart and thrown up into the air. Bodies were ripped apart, windows and buildings shattered, people buried alive under rubble. The destruction and death were spread down the street for several miles.

Suzune was ripped away from the Wood’s by the force of the blast. Kammi stared in horror, watching the explosion rush towards her in slow-motion, as her mother threw herself on top of her.

Mikkari was blown into the air before she knew what had happened. Something slammed into her and an intense pain shot through her head before everything went black. 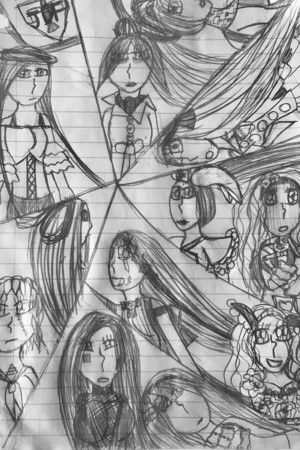