Returned by a Thousand Times

Walking down a road back from the market,

“Mama, why did you give money to that big sister?” that day Koi asked his mom while they were walking back from the store,

A few minutes before they were at a convenience store where a college girl was having trouble billing as she lacked 200 yen to pay, and Koi’s mom gave them to her

“didn’t that big sister look hard working? So, mama thought that I should make her day a bit happier,” his mother answered him with a bright smile,

“Why didn’t anyone else do that? Why should you be the one to do it?” Koi asked his mom with a confused face.

Koi's mother Kneeled in front of him and pulled his cheeks a bit as she spoke,

“You see, Koi, in this world the best time for being kind is when no one else is being kind. The person who will receive your kindness will be happy wholeheartedly,”

this happened when Koi wasn't even a teen but the current situation made him remember this old memory.

‘This isn’t the time to remember those!!’ Koi Yamamoto thought, trying to pull away from the uncle pulling his shirt,

“Please leave me, uncle. I am already late for submission....” Koi tried to shout but he couldn’t raise his voice loud enough,

“Please, she is struggling. You can save her!! I don’t have anyone besides her!!” Uncle wept not letting him pull back almost ripping his shirt,

‘I am struggling too… though!!’ Koi wanted to say but held back,

‘If he left, she’ll….’ Uncle’s eyes and nose both were filled with tears and snot.

‘Someone please help me!!’ Koi prayed in his head, but opposite to his wish, people instead started running faster near them as they witness the weird duo. Seeing this Koi recounts how he ended up in this situation,

After withdrawing money for his college registration and room’s down payment, he walked out of the bank after walking a little on the road. A stranger suddenly appeared before him and started begging for help the man's manner of speaking was rushed fearing a scam Koi tried escaping but the man tightly grasped his shirt,

“I will give you everything I own!! Just this once show me kindness, Kindness never goes empty!!” the uncle said loudly,

“…. It is returned by a thousand times” the words escaped Koi’s mouth with a feeling of nostalgia,

‘Not this!!’ he wanted to shout as he remembered another memory deeply tied to his soul.

“Mom, why should I show kindness? When I don’t get anything in return,” a young Koi of around 13 years old asked his mom who was laying on a bed,

“Koi, kindness never goes unreturned. It is returned one way or, another,” Mom said as she patted Koi’s head,

“But what if it isn’t? What if I show kindness but don’t get any in return!?” Koi asked, keeping one of his hands behind his back.

“When?” Koi asked, holding back his tears.

“You see Koi is such a good boy, God is troubled about how to return your kindness, so he is collecting the kindness you do as the kindness that returns late is increased by a thousand times… cough,” his mom said as she coughed,

“Returned by a thousand times?” Koi tilted his head.

“Yes, my good boy’s kindness will be returned by a thousand times” saying that his mom slept after kissing his forehead, and Koi sat there staring at his hand for a long time.

‘These memories!! If not for them…’

“Uncle please stop pulling my shirt,” Koi requested, although his voice was still low and but the meekness was replaced by a resolve,

And uncle left his shirt, preparing himself for the worst.

“How can I believe that you are telling the truth?” Koi asked,

And Uncle, who was sure of rejection, answered hurriedly,

“She is in the hospital on the other side at the end of the road!!”

‘He seems to be honest,’ Koi thought, with a confused face, and seeing his chance, Uncle pulled his hand and took him straight to the hospital before Koi could even consider resisting.

“Sto…p… stop” before his words reach Uncle’s ears. They were already at the hospital,

“She is admitted here… you can ask at the reception... I beg you!! if her life is saved, I’ll give my everything to you!!”

‘But this is my college and sustenance money…’ Koi thought as he asked the receptionist,

“Is his daughter really here?”

“Yes, she is… a Non-Government Organization was supposed to pay for her treatment but there is no answer from them and right now that man doesn’t have enough to pay for the operation,” the receptionist answered.

“Is she in a life-threatening situation?” Koi asked,

“She will die by the night if charges are not paid… they are already considering moving her out,” the Receptionist answered with a sorry face,

‘I pray this is like those shows where billionaires act needy poor and after judging people, give them mountains of fortune… because I can’t say no anymore’ Koi looked at the pale face of Uncle and asked,

“How much does the operation cost?” Koi asked,

“I don’t think you will be able to pay… I know about emotions but...” the nurse tried reasoning but Koi again in a low voice asked,

“How much please miss” and seeing genuine kindness and sadness coming from the boy’s eyes Nurse answered,

Koi’s face was blank, his heart was aching as the price asked was just 10000 less than what he has just withdrawn from the bank and the last of what he had left,

‘The college and hostel fee… there isn’t much time,’ Koi thought and finally pulled the money out of his bag and put it in front of the nurse in cash,

“Please it is just 1010,000 yen you can cut the slip in NGO’s name or anything… save her!!” for the first time what could be near a shout escaped from Koi’s mouth,

‘I was right… he is kind… more than them… he is giving it,’ Uncle thought and his leg fell limp and he began crying hugging Koi’s leg,

‘I appreciate the appreciation… but your snot!!’ Koi thought,

“Thanks, young man!! You are an angel!! A God if I must say… sorry for relying on you,” Uncle cried hard, his face and clothes in a mess,

“It is fine, she will be saved… I know how it feels to lose someone,” Koi said in a low voice as he patted Uncle’s back not knowing what to do,

‘I really pray he is that man… who is secretly a billionaire and goes around checking people’s kindness!!’

“Are you sure about this?” The receptionist asked, concerned because the clothes Koi was wearing weren’t something that someone rich would wear,

“Please hurry up,” Koi said as he stood up and took uncle towards a chair,

Even though the way he talked was meek and his voice was low,

But he who took the poor and troubled Uncle away while comforting him. his back looked especially wide to the receptionist. 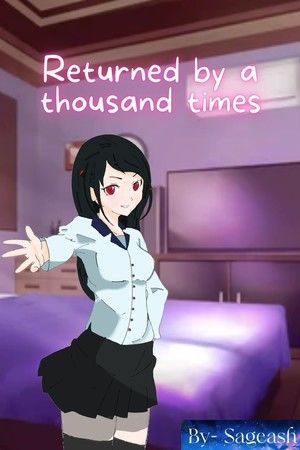 Returned by a Thousand Times