From Mouth to Hands

The front door shook like it was being pounded by a 7 foot body builder.

Dante tiptoed to his front door as he was home alone.  He peered through the peephole and to his astonishment he saw a frail old lady with an impatient look on her face.
He unlocked the door, hooked the chain lock on and slowly peered his head through the gap.

That familiar potent smell of lavender snuck its way through the gap and clawed its way into his nostrils which caused him to gasp.

"Phew! Why does she always seem to smell like she baths in that awful stuff?" he thought, shuddering and taking another deep breath through his mouth.

"Excuse me son, it already appears you've already stopped doing it, but could not play your music so loud?"

"Erm, ok maam, will do, bye!" he paused, slamming the door with a giant grin on his face.  He chuckled to himself as he actually just received a massive compliment, which was not intended by the old lady.

The thing is he wasn't playing music but he was actually just beatboxing into a speaker through his microphone.

"Haha, that was so cool, my beatboxing skills have gotten so good that it fooled that old lady into thinking it was actual music!"

He shook his head in bewilderment and went into the kitchen to get himself a glass of water.

"Why am I still at home on my own anyway, where is everybody?" he muttered while overflowing his glass into the sink deep in thought.  His mother and his sister Yuki were nowhere to be seen and they're usually home this time of day.

Taking a big gulp of water, he turned around and saw a note on the kitchen counter.

"Eh? What's this and why have I only just noticed it?"

"Dante, please empty the bins in the garage, I will be home at 7pm, love Mom"

"Grrrr, I'm never going to learn this new technique!" he growled through gritted teeth.
He had been trying to learn a way to beatbox while using a microphone stand which is difficult, as beatboxing is more effective when cupping the microphone.

He traipsed himself through the kitchen scuffing his feet along the floor and opened the door to the garage, it was dark inside.

"Huh, why is the light off?" he grumbled as he took a step down the short metal staircase.
The light was always on, so he was a bit bemused at this and as if by magic, as he reached over to turn on the light it turned on by itself.

"EH?" he exclaimed, recoiling in terror as his finger never touched the switch.
The garage lights took a few moments to flicker on and then brighten up, during that phase his eyes squinted down the staircase to which he glimpsed 2 dark figures, one of them walking away from the light switch.
He rubbed his eyes and when he opened them the lights shone brightly.

"EH???, What the heck?" Dante cried out and he lost his footing on the stairs and slid down them on his bottom.

"What are you guys doing down here in the dark?" He looked up to see his mother and sister Yuki holding torches while they stood on some blankets.

"We wanted to surprise you!" Squealed his sister who jumped excitedly on the spot.

"Surprise me how? By making me fall down the stairs? So you've been here this whole time?" he said nervously.

They both nodded, Yuki started more excited with anticipation and continued jumping up and down frantically.

His eyes glanced past them both to see a large item covered with a sheet, it had a very recognisable distinctive shape.

"Erm, is that what I think it is?" He reeled as he hurried over towards it.
His heart felt like it was beating through his chest as he whipped the sheet off.
A loud shimmer from cymbals echoed in the small garage, and sat there was a set of drums, metallic black with gold sparkles engrained in the shells paint, a vast amount of gold shiny cymbals surrounded the kit glistening brightly in the light.

"WOAH! This is the most beautiful kit i've ever seen, is..is..is it mine?" Dante shouted as he tapped the skin of one of the tom drums.

"Its all yours son, this was your Great Uncle Yagazaki's studio kit, he left it to you in his will, but we have had trouble shipping it over from his studio so it was just there the whole time not being used" his mother said as she rubbed Dante on the back.

Yuki continued jumping up and down on the spot squealing like a child at Christmas.
"I'm so excited to see you play it Dante, Mummy completely banned me from playing on it as you were upstairs!"

Dante stumbled back a bit in amazement as he tried to take in what he was just told.

"This was Great Uncle Yaga's kit? Am i dreaming? Is this real?" he cried as he walked around the kit running his hands along the each drum, tapping the cymbals on his way around.

"Oh yes it is my dear, now take good care of it and now you can continue his legacy and learn to play"

"Thank you so much Mother! I always knew Uncle Yaga had a nice drum kit but I never saw it in person!"
"Oh my, he has so many foot pedals!" he shouted as he walked behind the kit spotting the hi-hat and double bass pedals.

"So you set all this up by yourself?"

"Yes, the internet helped though" smirked his mother waving her smartphone at him.

"I see, and wait, so you heard me upstairs?" gasped Dante, realising he was rumbled for making a racket upstairs.

"We did! followed by banging on the front door, I guess you annoyed the smelly old lady next door" shrieked Yuki, thinking back to glimpsing the old lady through the small window in the garage.

Dante sniggered and gazed upon the worn drum throne and sat down slowly on it, it creaked as he positioned himself in front of the snare drum.  He looked delightfully at it and admired the worn skin.

"My god I can't believe Uncle Yaga played on this kit so long ago" he muttered in disbelief.

He saw two sticks poking out next to the drum head and grabbed them swiftly, with this he felt a surge go through his body, like a wave of adrenaline, excitement and energy, it was as if his Great Uncle's spirit was left on the sticks and suddenly shot into his body. His arms tingled and the hairs on his arms raised, he felt a sudden urge to play, almost as if his arms have already played these drums a thousand times before, even though this was the first time he'd ever sat at a real drum kit.
He glanced at his still smiling mother and sister, then stamped his right foot down on the kick pedal, the sound echoed throughout the garage, the bass resonated through the stomachs of everyone in the room.

"Woah" Did you feel that? he smirked

The cymbals rattled and trilled from the echoes and the snare rattled lightly.  The sound slowly dissipated and everyone smiled while Dante's eyes grew bigger and bigger.

"I can't wait to tell my friends at school!"

Tears fell from Dante's face as he lifted his arms above his head, sticks in hand, a creepy smile grew on his facewhich turned to a grimace as he planted his arms down and his right foot down on the kick pedal and struck the snare drum and crash cymbal simultaneously. 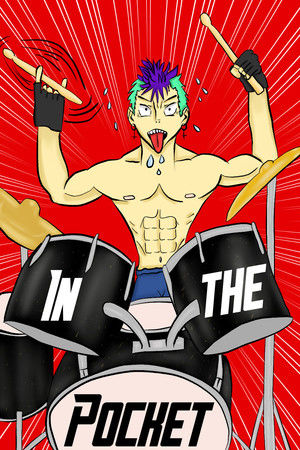