"Thousands of years ago, our world was at peace. Until war struck in our peaceful home. The citizens were turned against each other in greed, envy, and anger," read the man as he illustrated the events by the fireplacein the library.

"Why were the people turned against each other?" Asked the boy sitting on the man's lap.

"People were jealous of what others had that they did not. People were stealing which caused fights to break out. It spread like wildfire across this continent." Illustrations of explosions were placed across the map as black spread across.

"How come we're at peace now if all that happened?"

The illustration of the map was replaced by an illustration of a hooded figure holding a staff. A light emitting from the top only illuminating the face from the nose down. "Amist chaos, a wizard appeared. Restoring light to a continent that had lost theirs, eventually locking all the shadows to what we now know today as Shadowley," Illustrations of the original map appear. The map then changes to show shadowy figures being locked in deserted area known as Shadowley.

"How come that spell is still holding up?"

"That is because the staff has been passed down from wizard to wizard until it was bestowed upon me." Illustrations of the Wizard and the staff change multiple times until the man is shown.

"Wow! My own father's a wizard that kicks evils butt!" The child exclaimed as he jumped imitating a kick.

"Yes, yes, calm down now son. But I'm getting up there in years and I can only do so much," The father said calmly to his son, patting his leg for his son to sit.

"What does that mean?" The child inquired. The father felt a tug on his pant leg. It went away when the boy was situated.

"The time for a new wizard is drawing near. This staff will be passed to someone else."

"Who are you going to pick?"

"It is not I who picks son, it is the staff that picks. Once the successor is chosen, I will go on a journey to find this person and train them with the knowledge they need."

"Do you think I'll be next dad?" Eyes lighting up at the thought of being like his father.

"We'll see what the staff decides." With that, the fire was put out. 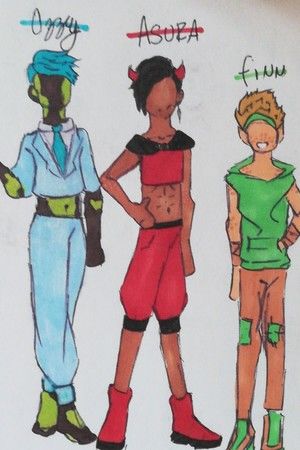