Substantial for a Ghost

“And here is where you’ll be staying.” The comptroller led them through a hissing pneumatic door, which opened into a low-ceiling chamber with buttressed carbon fiber walls and some amorphous chairs pulled around a gray table. Getting here had taken a short elevator ride and a quick walk, during which Taru had gone from surprised that Jack was alive, to disappointed that Jack was alive.

He walked at Nekkau’s shoulder, blue eyes alight, peppering her with friendly questions. “Nekkau, that’s a lovely name, where’s it from?”

“Cool! I’ve always wanted to see Amsterdam. Got a cousin who moved there a few years back, but our schedules never line up…”

Speaking of explosions, Taru had resolved the problem of Jack’s death and subsequent appearance. The breakfast storyteller had been spinning it tall, Taru decided. There had been no death, pod 057 and its occupants had an uneventful trip back to the space station, and in the morning somebody lied for attention. These assumptions fixed everything. Occam would be proud. So it seemed to Taru entirely appropriate that Jack zoomed around the room—trying out each chair, pulling the storage cupboards, and powersliding under the table—with the same energy he had shown alive & planetside.

“Wow! It’s…” Jack skidded to a stop on the table, threw out his arms, spun like the hills were alive, and stopped sour. “Awful. Where’s the color?”

“It’s employee housing,” Taru said, still standing stiff in the entryway and regretting skimping on breakfast. “What did you expect?”

But Jack was already on the move, slapping the access buttons on each door radiating off this central chamber. “If there’s a bunkbed I call top! Oh, small room small….”

The comptroller reminded Nekkau, “You have a routine checkup in 15 minutes.”

Nekkau nodded at Taru. “Guess we’ll introduce ourselves later. Around.” With a sleepy wave she turned and walked out of the apartment, leaving Taru with the comptroller and a still-exploring Jack.

“Any questions?” the comptroller said.

From one of the radiating rooms came a shout. “Woah! This room is even more samey than the others. Dibs!”

“How long am I stuck with these two?”

“All newly formed teams are locked for a 3-mission test interval. After that, well, let’s just say teams get reshuffled often.” The comptroller checked a small display woven onto the back of her hand. “Well, I need to get going. You’ll deploy tomorrow at 0700, spend today settling in and getting to know each other.”

Taru shot her a do I have to? look, but the door had already hissed shut behind her.

The apartment just oozed utilitarianism. Taru went to one of the side rooms, knowing before the door opened that the bed was little more than a cot bolted along one wall. Enough personal space to crash after a hard mission—her armor locker was almost as large as these bedrooms. Better appointed too. Not a throw pillow in sight. The air suggested carbon fiber resins. Even the apartment’s name—B274—cleaved to minimalist theme. So, unfortunately, did the fridge.

She returned to the common area and slid into one of the chairs to enjoy the silence and the vase of stargazer lilies—had those been there when she arrived? Silence that felt like it had forgotten something.

Taru swiveled toward each door in turn. “Jack?” No response, but on the wall she discovered a faded wall-hanging featuring some long forgotten musician. That definitely didn’t come standard with the room.

If he went and got himself stuck in an air vent, I’m not pulling him out. I swear—

Her thoughts derailed by the sounds of a hissing door and wood bumping against plasteel.

“Hey, little help here….uh? You never told me your name.”

Turning, Taru found Jack tugging something large and yellow and vinyl and comfy in from the hallway. It had wide, cushy arms that grabbed the doorway, and a pair of plush cushions that begged for someone, anyone to sink into them.

“How did you find a loveseat on a space station?”

“I guess I could call you ‘gunner’ if that’s what you want.”

Jack struggled to give the loveseat the corner turn it needed to pass the door. Wedged as it was halfway, Taru lent a hand, specifically her left, and turned the offending furniture so she might more easily push it back out, where it belonged. No sooner had she freed the seat’s leg than it was settled on the other side of the room.

“You better not have stolen that…”

“Stolen? Stolen? I bought it!”

“With what money?” Taru found herself glowering towering over the wayfinder. “If you got cash, spend it on gear. When I get back, all this froufrou shit better be—”

Taru’s stomach interrupted with a plaintive but polite growl.

“Um, how about we take this argument somewhere where there’s food?”

Somehow that response stung worse than if he had laughed at her. “…Oh so now you say something reasonable?”

“Alright, everything looks…fine?” The doctor scratched his wavy hair. He was too promising, too first-in-his-class, too fresh-outta-residency for this shit. “Everything about you…”

A patient nod from Nekkau shut him up. “I know. But the normal ones will hurt you too.”

“How? How can it possibly get worse?”

She beckoned the doctor to follow, out of his office, across an elevated walkway whose far side was guarded by a trio of orange cones. Nekkau moved them aside.

“Wait, this is a construction area, we can’t—”

Nekkau grabbed the scruff of the doctor’s white coat and dragged him through the unmarked door beyond, into a dark sea of flashing lights. They stepped over taped-down cables unseen and vacuum cables cooled with brine to reach a cluster of tall tubes.

The doctor obediently stepped forward and through the appointed glass. Within brown hair waved to the tank’s circulating current.

The doctor turned a queasy pale, and even though he didn’t want the answer, he asked: “One of them?” 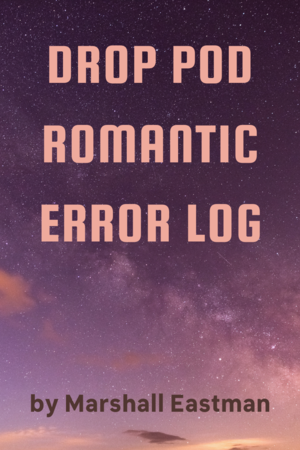