This entire week has been wild. With Lei Mei transferring to our school, becoming an MVP during a football match, having unexpected scenes with both Lei Mei and Sawa, to finally discovering Lei Mei is obsessed with her Chinese identity. All of that led to a beautiful weekend, with nothing to worry about.

I gave a call to Kingo to get him to come out with me, as always, he’s ready to come out. We planned to meet up at the park nearby, so that’s exactly where I headed out to. Today’s weather was meant to be nice, but this is more than they had predicted it to be.

I hid under a tree hoping that the heat wouldn't murder me but living on an island kicks you hard with the humidity. Maybe this heat will finally help me sweat off all those weird thoughts I have been experiencing the past week. Yeah, it must be because I haven’t been out enough. This is the perfect time to finally clear my mind and inhale some fresh air.

“Hey Taji, what you are doing on the floor under the tree?”

“I’m trying to avoid turning into a fried egg.”

“I was thinking to go to the arcade but it's too warm for that today.”

“Arcade sounds good… but since it’s too warm, wanna get some ice cream?”

“Could do with some right now. Lead the way.”

Kingo knows all the best places which relate to food, I always will trust him when it comes to it.

After walking in the dreadful heat, we finally made it to the ice cream place. It was a small local business which sold homemade desserts. I haven’t even heard of this place. Kingo is impressive when it comes to his food knowledge.

We grabbed an ice cream and sat down under a tree. Such a peaceful day. I’m glad that I decided to leave the house. My mind has restarted, relaxed, and refreshed itself. It feels like I don’t even know who this lee may is anymore. Just a terrible dream, which I have awoken from.

“Hey, I heard that there was going to be some stuff going down nearby, wanna go check it out?” Kingo randomly mentioned it.

“I have no idea, but I heard someone talk about it on my way here.”

“Oh, yeah sure why not. Better than doing nothing.”

Kingo dragged me out to an area of the city which I haven’t been to. It’s always nice exploring new areas, it’s just a bit discomforting not knowing what is where.

“Hey, check it out, I think this is the thing they were talking about.”

There was a small platform with a few people standing on top. They were holding up Chinese flags and talking about some ‘Moam Zeebra’. What a weird name. Kingo and I stood around listening to them and making fun of them. It was a lot of fun I have to say. I missed these days. They really made life so much more enjoyable.

As I thought my mind was finally freed from those unholy thoughts, the person who I have been working on forgetting, made her way up onto the small stage. She spoke with a confident tone, looking directly at the crowd.

Chills ran down my spine. Her voice spoke to me. Whatever she was saying didn’t mean anything to me, all that I could concentrate on is her and her voice.

“Hey, doesn’t that look like that new girl… that Lei girl?” Kingo asked

However, his words went in and out of my ears. No matter how hard I tried, I knew deep down I wouldn’t forget. It’s impossible to forget this feeling. A feeling I haven’t felt before. This sensation… it's just too irresistible.

“Hey, is the heat getting to you or something?” Kingo carried on trying to get my attention.

Without my noticing, Kingo walked away and came back a few minutes later. I was still deeply fascinated by how powerful and how confident her voice is. Words can’t explain how beautiful her voice is.

While I was drifting away into my dreamland, Kingo splashed a bottle of water all over my head.

“You seemed to be having a heat stroke.”

“Have you ever even seen what a heatstroke looks like before?”

“Not really, but if I had to take a guess on what they looked like I would be thinking of you a few seconds ago. Glad that you’re alive Taji.”

His stupidity is one of a kind, no matter how stupid he sounds, it somehow still makes sense. Now that I was no longer prepared to sell my soul away to Lei Mei and her Chinese organisation, we went to find something else to do.

The city has plenty of activities for us to do, the only issue is, that my parents lowered my weekly allowance because I skipped school that one day. Despite that, we ended up doing quite a lot of stuff. Once again, my mind has been cleared. I feel like I have once again been reborn as a new person.

After spending an entire day out, I was looking forward to going home and getting some sleep. I parted my ways for the night with Kingo at the park where we met in the morning.

The evening was truly amazing. The temperature was liveable, the cooler night breeze came in making it the perfect weather to walk in. Nothing could make this day end any better. I took an extra-long route to make the most of the fantastic, relaxing walk.

Ah finally, home. I probably shouldn’t have walked the long way back, it’s late now and as well as I know my parents, they will without a doubt decide to let me know that it's too late.

“TAAAAAAAAJIIIIIIIIIIIIIIIIIIII, WHERE ON EARTH HAVE YOU BEEN THE PAST TWO HOURS?!! YOU SAID YOU WILL BE BACK BY 7, IT'S CURRENTLY 9!” My mother yelled at the door.

“Ahaha, yeah, sorry. I went on a walk on the way back, so I lost track of time.”

“We will talk about this tomorrow. I didn’t need to raise my voice like this. Mrs and Mr Lei asked us to look after Mei for the night as they will be away.”

“Sawa is away for the weekend, did you not listen to what we talked about earlier this week during dinner?”

“Start listening more often. It will help you a lot in life. Anyways, I sent Mei to your room to play something since you hid all the consoles in your room.”

Wait… my room? Oh no… Not this again. Though thinking about it, Lei Mei wouldn’t look through my stuff, right? Sawa is the one who likes snooping in other people's stuff.

I quietly snuck up the stairs and peeked into my room. Just as my mother said, Lei Mei was indeed playing some games. Thank goodness. I really didn’t need a repeat of what happened last time. Since Lei Mei was busy, I might as well take a bath, it’s been a long day and I probably smell like a dog.

I prepared myself a nice hot steamy bath. Finally, at last, I was free from stress and worry. Sweating everything away, with nothing to fear. At least that’s what I expected, though reality and expectations don’t always meet. However, some may say this was a dream coming true.

An unexpected visitor entered the bathroom. I stayed silent, hoping that whoever it was, would quickly do what they need and leave. I was deeply mistaken. I peeked over the bath curtains to see who it was. Fortunately for me, it was Lei Mei. Or should it be, unfortunately?

As much as I would hate it to be my mother, it being Lei Mei, is both better and worse. I wanted to speak up to let her know I was here but the urge to see more… What am I even thinking? What the hell is wrong with me?!

“Hey! Lei Mei, I’m currently using the bath.” I called out before she got undressed.

She turned around and gazed at me. “I don’t mind, I'm only here to quickly shower. However, your mother didn’t mention you being back yet, hence why I am here.” She replied.

“I would, however, appreciate it if you remained behind the curtains. It’s awfully rude to look at a young woman undressing in a situation like this.” She added.

I should not expect it to be that easy. She is after all a woman. I wonder what it would be like if it was Sawa in this situation… She would probably strangle me and try to suffocate me for not saying anything as soon as she walked in. Why did I bother thinking about this?

Lei Mei got undressed and went to use the shower. I quietly hid behind the bath curtains, though I wasn’t directly looking. The light left a shadow of her figure on the curtains. Even if I didn’t want to see this was unavoidable.

“Hey… Lei Mei. Can I ask you something?”

“As long as you remain behind the curtains and don’t ask for anything indecent, feel free to do so. I do not guarantee an answer though.”

Was she always this cold? Whatever, I must be imagining things.

“What were you up to today?”

“Are there no better things you can do instead of pointless idle conversations?”

“Not really. That is why I asked. Might as well talk while washing since we are here already.”

“I suppose you have a valid point. I’m not one to make meaningless conversations, but I shall comply with this one time due to the situation. Regarding your question, I was meeting people in the city, it was a rather gorgeous day to do so.”

“I know right? I was also out today, exploring some areas of the city which I don’t usually go to. We saw some crowd around a stage, Kingo and I spent some time watching, didn’t pay much attention to it though.”

“Where, where was that stage, if I may a, ask?” she asked as the water stopped running.

“I don’t know the area, so I can’t tell you exactly, why do you ask though? Weren’t you there?”

No word or sound was made for a minute after what I said. I don’t think I was supposed to be there…

Suddenly, heavy footsteps approached me. The curtain got ripped off leaving me exposed to Lei Mei.

“Why!?” tears began to fall as her face turned bright red.

“Why were you there?” She began to raise her voice.

I probably shouldn’t have said that. But why is she crying? Or is she angry? I can’t tell what she is feeling. I feel obligated to comfort her, yet I feel like I should back off and apologise. In this situation, however, would be extremely awkward. I am still undressed and in the bath. Lei Mei was smart enough to grab a towel around herself.

“Sorry. This is my fault. I overreacted. Please forget this happened.” Throwing the curtain over me as she left the bathroom.

Now, I have to say, I am deeply confused. Did I do something wrong, or was it something right? She didn’t give me a chance to apologise, or matter of fact didn’t let me say anything. Well, this will be an awkward night.

In the end, I couldn’t have a relaxing day. My mother ended up scolding me for an hour while I wrapped myself around the ripped curtains. Still, I remain uncertain of what I did wrong. 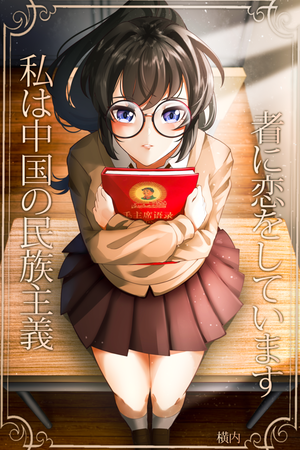