The String Of Fate Is False!

Heart Strings of the Vampire King!

Red is most commonly associated with two things. The velvety bright shade of rose petals given by a person—love. And the reaction of being stung by a bee in the mid of spring—blood. In my case, it’s neither of those; but also, in a way, both.

I pull the tight plaid skirt over my waist, button the top of the polo shirt, then comb my hair into a tight gathering ponytail and secure it with a hair tie. My reflection of myself in the bedside mirror looks average, but nothing covers the scars on my left finger. It was cutting deeper in my skin already: the bondage of my soul-tie.

Mother had told me stories of how she and my father had met. She claims the string of fate was her fairy godmother, granting crystal slippers and a dress before her to-be husband. Then again, they were high school sweethearts. She didn’t endure the pain of the string.

Nevertheless, I wasn’t them. No string of fate would tell me who I would marry. Even if one day I found the person bonded to the other half of my soul-tie, I would never marry them.

Just my luck, finding the other half of the red string of fate was one in a billion. Also my luck, the first day back from winter break as a senior meant every kid in the school would be searching to find the other side of their string.

Everyone didn’t just see random red strings everywhere, but rather each to their own. Every person was able to see their own string that connected them to their soul partner—but that doesn’t mean you’d ever find the other end of it. The longer you are without a soulmate, the tighter the bondage becomes. At the halfway mark of your life, your body becomes weaker and changes within, during this period most soul ties banish as well. No one knows why, nor do they actually care to know.

I stretch my arms out and pull my fluffy and chubby cat, Lucky, into a quick embrace. He growls into my chest after being taken from his spot in the window, but I knew he actually meant well. Then, I speed off with my packed lunch to go to school.

My seat is in the far back corner, next to Gina Saito, the beautiful popular girl at Sakurai Academy. Her sleek blonde hair, ice-blue eyes, and clear, porcelain skin radiate beauty like an actress right out of television. She’s surrounded by half the class, as usual.

“Look how gorgeous he is?!” She holds the popular Japanese magazine filled with famous actors and singers to her face. “I would marry him on the spot if he was the other half of my string! We would be the most famous couple ever… and I could design my own makeup brand staring the two of us, the theme would be soulmates for life!”

“Gina, if only I were your other half,” Kei sobs beside her. He’d been trying to get with her since the beginning of junior high. Gina, however, was determined to find her other half.

“Not happening, Kei. The only match for me is The Vampire King!” not a literal vampire… metaphorical. He was nicknamed for his dark hair and rare red-auburn eyes, Ryota Mochizuki. He debuted right out of high school as a singer and songwriter, quickly rising to top number one in the global music industry and, of course, is named the hottest and youngest rising rockstar in Japan. He’s also the star Gina is fawning over in the magazine.

“Gina, you and the Vampire King would be so cute together!” her friend next to her, Emi Sakai, chimes in, putting a layer of red gloss on her lips. She was Gina’s puppy, she followed her around everywhere and always stood for anything Gina said.

The group surrounding Gina continues to chatter next to me as I tap my pencil slowly on the desk near my notepad. I wait for class to begin feeling glares from beside me. When the bell rings, Ms. Ishioka stomps into the room with her wide glasses. She raises them off the bridge of her nose, a single scowl of hers that could silence the whole room without a word.

“Class, the music program of Sakurai Academy has decided to make a slight change of schedule. Instead of sitting here, we will take the buses to the music festival.” she shifts her stance, and frowns from her place behind the podium at the front of the class. “I know you all were excited about today's lesson, but we’re just going to have to hold off. And unfortunately, your test will be pushed back to next week… that is all.”

“YES!” the entire class fist pumps into the air, and Ms. Ishioka face-palms a sigh and drags herself over to the entrance doorway where another teacher begins to sulk, as well.

“Gina, sit with me on the bus!” Kei shouts while gathering his stuff.

“You’re always with her, Emi.”

“Ok, okay-” Gina makes her decision with her hands on her hips, “I’ll sit with both of you, problem solved!” she makes a cheesing smile at them with her fingers making a peace sign in the air, pink sparkling polish coats her nails, complementing the streaks of pink in her blond hair.

We all line up outside in our coordinating classes, four in total, in the bus area. Each friend group had their own conversations and laughed at inside jokes. I stood off to the side with headphones connected to my phone, anime rock music blaring in my ears. It helped to blur the other sounds out. I was always on my own, and I was also very comfortable on my own.

The whistle of the Vice President of the Student Council, Takumi Chiba, has everyone’s attention. He was like a boy version of Gina, capturing the hearts of all the girls, but maybe a little smarter. I pull out an earbud to listen.

“Alright class, let me read the list of assigned groups. You will be required to sit with them and be with them the entire trip,” Ms. Ishioka announces next to Takumi.

The list goes on until I hear my name called, “…Chisaka Kutsuki, Gina Saito, and Takumi Chiba.” My eyes grow wide, this is already a sign of bad luck.

“You’re Chisaka, right? You placed second on finals tests last semester,” Takumi thinks aloud. I blush, slightly. This is the first time I’d ever been addressed by him. He was just as gorgeous as Gina, the two were always thought to be a golden couple… if they ever dated.

“Glad to get to know you, let’s have a nice trip!” He smiles. I look up at his perfect pearl-white grin, trimmed black hair, and golden eyes. He is slender, his legs as long and perfect as a male model and he has the sharpest jawline I’d seen. I could almost melt from his complexion, but I nod and look back down, and try to distract myself from him.

“Takumi, thank goodness I have you in my group!” Gina pats his back from behind and jumps into the circle. “Ah, Desk Partner. You should probably consider covering those dark circles under your eyes—it looks like you have just come from the dark side.” she chuckles.

I wanted to throw my face in my bag and cry, “Aha, I was up most of the night so I didn’t get much sleep.” Lie.

“You can borrow my concealer if you want,” she pulls a tube of makeup from her designer bag. I couldn’t tell if she genuinely wanted to help, or if she was making fun of me.

“It’s fine.” I quietly mumble through a forced smile.

The rest of the ride to the music festival wasn’t as bad as I thought it would be. Gina was focused on talking to Takumi and texting her friends. I had pulled out a manga to read while on the way, and Takumi half paid attention to Gina but also had an earbud in. The only thing that distracted me was how close my legs were to Takumi’s. They brushed against one another a few times, and he leaned into me once, while there was a bump in the road. I don’t think he really noticed though.

“We’re here!” Gina stands and stretches her long legs and lean arms after the bus ride. “Maybe I can find my soulmate here! What'd you think, Takumi?”

He scratches his head, “Uh, maybe. One in a million, Gina.” she sighs and crosses her arms.

“Hey, look, It’s my Vampire King! He’s playing here tonight.” Gina points her finger in the direction of a sign with the handsome famous singer dressed in rather sexy vampire makeup and a dark costume with chains attached at the hip.

“That’s a concert, Gina, not a part of the music festival. It costs.” Takumi states.

“We can’t just go to a concert, we’d be breaking school rules.”

“Not technically. They did just say to stay in our groups—Desk Partner, what do you think? Don’t you wanna have some fun, too?” Gina winks in my direction.

I honestly thought they’d forgotten I was here.

“Her name is Chisaka, not ‘desk partner’,” Takumi corrects, and I finally meet eyes with him again. He’s super nice, and he remembered my name.

“We- we can go,” I say under my breath, enough for them to hear. I would be lying if I said I didn’t want to go. The Vampire King was an amazing singer. I’d always wanted to attend his concert, but I never had enough for the tickets, nor any friends to go with.

“Then it’s settled,” Gina looks at both Takumi and I, grabbing each of our hands, “LET'S GO!” 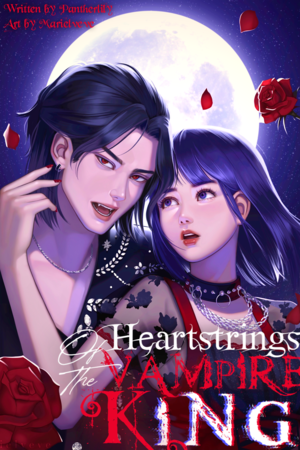 Heart Strings of the Vampire King!