Intercepted by the boy’s laughter, the man knew that he missed an important thing. He turned around and looked to the area to realize that he was just dancing right in the palm of the boy’s hand.

“… Not here! They’re not here!” He turned his sight toward the boy who was having a delightful time seeing the expressions that were printed on the villain’s face. The young man didn’t hold himself a bit. His laughter was as loud as the desperate scream that he heard just a moment ago. And with a sarcastic voice he asked: “… Mr. shiny arms, do you miss something?”

“…Yeah!! Some kids were here a moment ago. I was trying to have fun with them! Especially since they didn’t integrate any metal in their bodies yet. I would be very grateful to you if you tell me where they’ve gone…” The anger was engulfing the half-android man as he continued talking: “…What about this? To show my gratitude to you I shall give you a quick and painless death. I wasn’t planning on killing you at first, but you’ve heard things that you shouldn’t have heard...”

A sound intercepted the villain's voice and obliged him to stop talking.

“… Master, the objective is out of the enemy’s range of sight.”

The villain who was perplexed for a moment trying to search for the source of the feminine voice finally noticed the dim light that shined for a brief moment from the boy’s black jacket. A devilish smile was printed on his face as he covered his face with his hand.

The boy who was a few meters away took a few steps back as if he wanted to keep more distance between him and the crazy men standing before him.

“… Interesting! I was thinking to jump and cut your throat a moment ago and you sensed my murderous intent immediately and reacted to it! That timing of your reaction was so impressive to the point where you made me think that I am facing a wild animal not a human… I wonder who’s the monster between us. Tell me, rich noble kid!”

There were three options for people to live peacefully inside the domes that were controlled by police bots… The first was implanting electronic devices in their bodies that can help the androids to identify them. The second option was living in the side of the covered area, which was basically slums, together where they can be controlled by cameras.

The last option was paying a heavy amount of money in order to wield costume made gloves or badges that contain GPS tracker which will be their ID in order to move freely in the city.

The boy who lost the cool smile he had for a few seconds regained his self-confidence as he walked toward his enemy while enjoying the conversation.

“… It took you... like forever to notice my badge! I hope it doesn’t bother you to have a rich kid as your enemy now.”

The crazy man pulled out an ordinary gun and a knife from his coat’s pockets while looking at the boy who continued marching towards him.

“… I can’t hope for more! Forget about the kids! I can’t help but feel the urge to tear you apart…”

“…Mind if I ask you something?” The boy asked with a carefree voice. He stood still waiting for the man’s answer which shortly after that came: “…You’re going to die anyway so suit yourself…”

“…The first test subjects of the Half-Android Humans project were animals of course. After the success of the operation on them. They used human subjects to test on them. I don’t think that you joined these crazy tests voluntarily…”

The villain’s face became puzzled as he asked: “…And?”

“…You were forced to do these tests. Am I correct? And…”

The villain’s whistle interrupted him. “…You’ve got a sharp mind there. But what a disappointment…”

“…For a moment I thought you were going to ask about something that will help you in this dire situation, so I kept my guard on…” The man waved his knife a bit in the air then continued: “…But it looks like you’ve given up and now you’re just being led by your natural curiosity! Is it more important to get an answer to this question than searching for a way to escape?”

The boy’s confident smile turned into an ugly malicious one. “...I will be grateful to you if you answer that question!”

The man sighed out of boredom: “… I guess… Everyone has a different idea when it comes to last wishes… hmm… When the very first tests started, those crazy scientists didn't have a clear idea in their minds. It is true that in the first experiments, they used monkeys, dogs, and rats and tried to change as much as they can of their natural organs with machines to know where the limit, that they shouldn’t surpass, was when experimenting in humans. But when it came to real test of shape, size, and components, they simply used us: prisoners who were sentenced to death penalty or life sentence… They didn’t oblige us to join those experiments but who wouldn’t?! We, participants, were promised to be freed of all charges if we helped them.”

“…So, between jail to death or death itself and surviving some crazy experiments you’ve chosen the latter.” The boy asked with a surprised voice.

“…Correct, I was sentenced to death for robbing a bank, taking the people there as hostages and killing one of them. And I was a lucky man to get out of jail after 3 years only, in which I only spent two weeks there. The rest was in the laboratory where I was treated like a rat.”

The young man showed a disgusted face that he rarely shows. The same expression was on his face when he saw for the first time in his life dead people being thrown into a mass grave and covered with dust and dirt.

He looked at the ground below him where dust and a lot of rocks in different shapes and sizes were thrown here and there, rocks that were a part of the orphanage just 2 minutes ago. Then, he suddenly remembered that he was at that time before an enemy and that he should only focus on him. “…Haven’t finished yet?”

Meanwhile, the villain was licking his knife in a very unpleasant way while continuing talking about his previous crimes. “…Huh? You’re the one who asked about those things!!” The voice of the fire burning through some building was getting quieter as the rain was doing a perfect job in extinguishing it…

The boy put his hand on his head to sweep back his dark black hair, that covered his sight once again. “…I only asked to know if you’re a victim or just an idiot criminal. And from what I see you don’t deserve any sympathy. You’re just a perverted criminal!”

“…So, this is the end of the talk? Isn’t it?” The man asked as he focused his sight on the young man who was preparing to attack.

“…Are you okay with staying here trying to fight me? As I said earlier, the boss is still roaming in this city searching for his prey…”

Not being able to continue talking, the terrorist had no choice but to jump back trying to evade being beheaded by the sudden attack launched by the boy.

He wasn’t expecting such speed or accuracy. “… Looks like someone has lost all the patience that he had two minutes ago. I know how you’re feeling now. You want to cut me down no matter what.” He laughed out loud and then he continued talking as if nothing happened: “Nice sword you’ve got there. After tearing you apart I will take good care of him.”

After the first attack the boy stood still looking at the sword in his right hand. He didn’t expect the sword to be this light. Aside from its weight, the blade was emitting small high-speed vibrations that weren't noticed neither by sight nor by holding it. He was hearing the vibration cutting through air even if he wasn’t swinging it.

If he looked closely at the blade, he could have noticed that everything that falls on the blade is cut in half before even reaching it. Because of the speed vibrations, the air around the blade became a part of it.

In the short moment in which the boy switched his focus from the enemy to his blade, he sensed a difference in the atmosphere around him. The bloodlust he sensed earlier became, suddenly, stronger. His instincts that were as sharp as those of a wild animal pushed him to jump as far as he could.

“…I should do something about those wild instincts of yours. They are really getting in the way. But if this is all what you’ve got, then allow me to end your pathetic life here and now. Even if you’re quick, quicker than any other human I’ve met before, you’re lacking in strength which makes you a very weak opponent when facing someone like me.” He turned around to see what was about to strike him from behind and he saw the criminal swinging his knife trying to hit him.

He smiled and answered in a mocking voice: “…Oh really! I’m sorry for keeping you waiting. Shall we get started now?”

“…So interesting!” The man couldn’t help it but laugh. “…You’re indeed my favorite victim for the day. Are you implying that you weren’t fighting me with your true strength?”

The boy, who understood that his first attack was totally futile even if it was a sudden one, decided to throw caution to the wind. “…Huh?! Don’t be serious! Until now, you didn’t think of an important fact. A 14-year-old schoolboy coming to face you while having a sword in his hand. This is more than strange to add to that the badge that I have on my jacket. There is a reason behind all of this and yet, up till now you didn’t even put a tiny attempt to think of it before fighting me.” 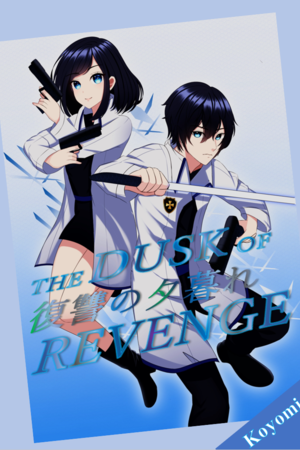