"Well students, now you know how to answer anyone who claims that Earth doesn't exist"

The class was in a little disorder as the school alarm would ring at any moment, most of the students were packing up their material and chatting, like if the class was already over, yet the teacher ask for their attention one last time

"Guys, I would like to point out that, generally, many get a little... upset when they have earth history lessons, nobody wanted to move to this awful planet, where is cold, poisonous, dangerous and we live closed in this disgusting city"

the room became quiet as everyone got down with the teacher words. Then the teacher raised her voice

"however, we must not give up, we will recouver what is ours, humanity overcame all threats throughout history and these monsters freaks will not be any different, and then..."

The alarm started to ring interrupting the teachers speech.

Far far away from there, in a rocket launch pad being swarmed by giant monsters, a squad of 6 mechas are helping the workers escape.

"we finished evaccuating, everyone fall back"

As they are reatreating, an huge battlecruiser appears in the sky, every part of it, the guns, the propulsors terrified the soldiers.

"W- we are saved right? other humans came to r- rescue us right?"

Before they could sense any sort of relief, the terrible truth came out as their leader point out to, what appeared to be it's main cannon, loading and getting ready to shoot towards them.

Lightfade, one of the mechas that could create force fields, started to create a shield, since evading the attack looked impossible. As they were gathering to protect themselves, one of them was way too far away, and probably wasn't going to make it.

It wasn't a few more steps, and the ship shot.

And after the explosion, the only thing left was smoke, and an unconfortable silence. 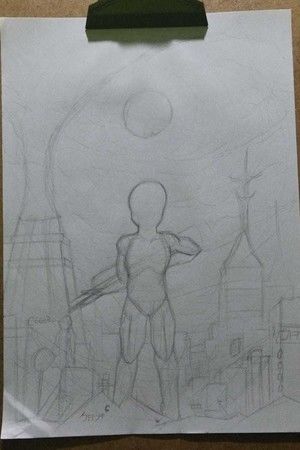