Twenty Minutes From and Into the Future

“Big bro! Would you put your brain in a robot body?”

"You really gotta ask that now? The cops are still hot on our trail!"

The motorcycle's engine roared throughout the Japanese countryside. The bike strafed from side to side as it made its way through the treacherous, zig-zagging mountainside road, the setting sun casting shadows that made it hard to make out the next curve. Riding on it were an odd pair—a man and a young girl.

The driver: Mitsuo Kuroiwa, a wide-shouldered man clad in a black formal suit; a man known as Tokyo's—nay, the world's greatest mercenary, a man with an impressive kill count of high profile targets closing into the hundreds.

The rider: Chinatsu Togusa, a twelve-year-old girl in an oversized jacket, and adoptive scion of a tech company owner that Kuroiwa had just slain an hour prior. A brat like any other, but a precocious child who was way too happy to be kidnapped.

While Kuroiwa would leave a crime scene carrying nothing but his revolver, this time was different. His client had a special request: "You need to come home with the girl."

Kuroiwa might have bitten off more than he could chew.

"One… two… three…" counted Chinatsu, raising digits for every police car she pointed out. "Ten! Twenty! Gee willikers, big bro. Just how wanted are you?"

"Enough to have half the metropolitan on my ass, apparently."

"Wow! Wow!" Chinatsu cheered, waving her arms in the air as if she were on-board Japan's best coaster ride. She then clung tight to Kuroiwa's back as he swerved through the next curve. "A real police chase! I've only seen this kinda stuff in movies!"

"You… you seem awfully thrilled for someone who just lost her dad!" shouted Kuroiwa amidst the deafening sounds of sirens.

"Daddy was a dick," exclaimed Chinatsu while clutching an old bruise on her arm. "I'm happier away from him. Fuck that asshole."

Muffled chatter sounded from a radio strapped to Kuroiwa's waist. It was a specially-rigged radio that intercepted police frequencies and played it out for the mercenary to hear in a pinch. An old reconnaissance tool that served him well, even up to now.

"Suspect was last sighted heading south from your previous position, may be headed out of the prefecture. Please advice."

"Yes, uh, we just caught up with the suspect. It would be best to set-up a roadblock before the fork. Can't have Kanagawa PD nabbing Kuroiwa before us. Over."

"Well now," muttered Kuroiwa. "They've got me on the ropes now... Even Tokyo and Kanagawa PD's still got time to see who's got first pickings."

Kuroiwa had to think of a way to get out of this situation. He mapped out the local roadmap in his head, trying to find any alternate routes that won't end up with him running into a police roadblock—a roadblock that would spell curtains for him and his chase.

Chinatsu felt Kuroiwa's body stiffen and even through the adrenaline, could feel the goosebumps on his arms. "Ever thought about what you'd do after all this is done?" said Chinatsu, trying to lighten the mood.

"What's with the question?"

Kuroiwa sighed. It was probably the same for Chinatsu; the radio chatter may have spooked her as well. She may be twelve, but there was a reason the client called her a "kid genius". She wasn't dumb.

"What else? I'll head back to my pad and wait for the next client. It'll be business as usual." said Kuroiwa monotonically.

"You never thought of settling down, getting a ten-to-six job? Maybe marrying a pretty lady? Like, say—"

"Hol' up," Kuroiwa interrupted. "You're too young now and you'll always be too young for me. Kill the thought."

"Even when I'm eighteen? Twenty years old? And when I'm super rich and will invent the greatest machine known to man? And when I can get you work that doesn’t involve committing multiple felonies every month? What about starting a family?” Chinatsu said, barraging her poor chauffeur with strange questions. But one part of it did hit home.

Family?, Kuroiwa thought as his mouth twisted into a cocky smile.

“Look,” he said dismissively. “Stuff like that’s beyond people like me. I gave it up the moment I chose the sweeper life. And say, the time comes for me to decide otherwise? Again, it won’t be with you, squirt.”

“So you say,” said Chinatsu. She then pouted and looked out into the horizon’s setting sun, almost blocking out the sounds of engines and police sirens. “But you’re shaking. Did my question spook you?” she continued in a cocky tone. “Maybe you’re scared? What, gonna piss your pants, maybe? Maybe sh—”

“No! Consider your options now before we die.”

“I’ll need to survive first before I consider them.”

“Aha! So you will give it some thought. But only if we live through this, right?”

“...Are you seriously trying to corner me in a conversation now? Of all times?”

By Kuroiwa’s estimates, there were only five hundred meters left before they reached the supposed ‘fork’ in this mountainous highway. The cops ought to have finished their preparations by now, and the roadblock would be bad news if they were to run straight into it. However, there were no other roads left to cross into before the fork. They were screwed. Brute forcing the roadblock was an option, but the chances of breaking through were slim; even slimmer was the chance to penetrate the blockade without risking the safety of either himself or Chinatsu.

But there was one way left out of this. One that had the same risk of harm like the other, but without the part where the police apprehend them. Kuroiwa turned the bike into an alternate road with yellow warning signs blocking its entrance. For once, Chinatsu wasn’t acutely aware of what any of this meant.

Out of the blue, Chinatsu repeated her question. “You haven’t answered me yet! Would you put your brain in a robot body?”

Kuroiwa ignored her and focused on the road ahead. As the greenery thickened, the cement on the road began to thin. And as the bike sped through the deteriorating road, so did Kuroiwa’s sanity erode. He’d always been the type to have a strong sense of self-preservation, but…

“Stop calling me kid, already!” protested Chinatsu while clinging on to Kuroiwa’s back for dear life. “I know you know I have a name. But I don’t know yours yet!”

Kuroiwa chuckled as he put the pedal to the metal, accelerating the motorcycle at a steady pace. “That’s funny. Too bad you don’t need to know.”

“You’re awful at keeping your hostages sane. You could at least tell me your name.”

“Sure. But I’ll answer that stupid question of yours first.”

The needle of the speedometer reached its limit. Kuroiwa thrust his weight backwards, lifting the front of the bike ever so slightly. Chinatsu broke a sweat as she began to realize what Kuroiwa was planning to do. She peered over his shoulder and gazed upon the road—or rather, the road that’s supposed to be there.

A dead end. An incomplete bridge, leading to a deep plunge below.

On the other side was the second half of the bridge, a 50 meter gap separating them.

Kuroiwa lifted the bike at full speed, revving the engine to its utmost limit. And then…

He jumped the ravine, sending them and the bike flying into the sunset. The wind blew Kuroiwa’s hair like a shrub in a typhoon, as a sense of euphoria overcame him. Chinatsu held on tight, a panicked shriek escaping her lungs. Time slowed down for both as the eyes of death stared them down. But as that fleeing second endured, all the fear escaped Chinatsu; her frightful face contorting into a smile—a haughty smile as if to taunt the jaws of the reaper itself.

The bike crossed ten meters, then twenty, then thirty, and then...

They lost their momentum. Their ride dropped like a rock, and they clung to it with the last of their breath.

And after that was darkness for Kuroiwa.

The last words he heard in his long delirium were:

“Mitsuo Kuroiwa. For your countless crimes against the city of Tokyo, I hereby sentence you to a period of indefinite cryogenic sleep. May future generations find it in them to pardon you.”

How long would he sleep?

It wasn’t as if the time he experienced out cold was so bad; It was nothing but a fleeting moment to him. What was ten minutes, an hour, a day, a year, or even a century compared to each other in a state of deep sleep?

Yeah. Guess I’ll consider my options, just like Chinatsu said. Maybe I’ll find a job when I wake up.

Good night. I’ll see you in the morning, Tokyo... 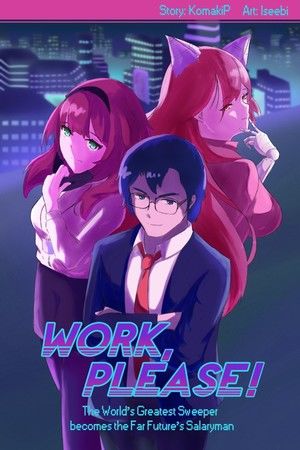