Before anyone has even started to stir, Viorel stood in the immaculate expanse of his garden.

He relished the feeling of cold breeze wafting against his skin, breathing in the dewy dampness in the air and enjoying the hues of periwinkle, chartreuse and blues of the sky, a sense of calm washing over his normally tense body.

Viorel loved early morning walks. This part of his routine was the one he looked forward to the most.
Watching the sun rise was a far better past time than indulging people he would rather see fall (or push) down a cliff.

“Hey, Viorel! I finally caught you.”

Viorel had felt his eye twitch in annoyance when a man walked up beside him with careful steps.
His sister’s joke of a fiancé seemed to think five in the morning was the perfect time to bond with his brother-in-law.

He made it clear it wasn’t when he slowly stepped backwards and left quietly, leaving the man to unknowingly babble by himself for who knows how long.

Hearing him continue his mundane chatter about fate, love and destiny as he walked away, Viorel wondered if replacing the groom with a clown 5 months before the wedding (as it wouldn’t make much of a difference) would be too much of a hassle.

This afternoon, Viorel’s lunch was murdered right in front of him.

He has very particular taste for.. Everything.
So when the carefully plated tomato and paprika omelette he made was thrown off the table by a very big, very fuzzy creature, he knew he was going to starve.

He ignored the house chef who offered to make him something new in favor of glaring at the newest addition to their house; a hairy border collie that was responsible for his grumbling stomach.
The beast looked smug and he was almost tempted to flip over its own bowl of kibbles as petty revenge, but of course, that would make him look insane.

Aunt Rosie knew what she was doing when she gave the dog as a wedding present for his sister. It seems like it wasn't enough that his sister, Nina's fiancé is roaming around his house, now he has two long legged mutts to deal with.

Walking back to his room to sleep away the hunger, Viorel was convinced something worse was going to happen that day, continuing the bad luck streak he was experiencing.

A deafening ringing lingered in his ears.

His entire body felt like it was just thrown across the room.

Sitting up, he found Nina standing somewhere in front of him, white noise gradually transitioned to voices.

“—A pleasure, sweetheart. And who might this be?” a woman said.

With his blurry vision (was it his eyes or the room that was filled with smoke?), Viorel made out movements; of his sister and another person he didn’t recognise.

The latter was stepping closer to him, crouching down to be in his eye level from his place on the floor.

His unfocused eyes could see a round face, the outline of bright hair, a pair of wide, imploring eyes and an expectant smile.

But then his eyes adjusted and the face was the sickly colour of lavender, strawberry blonde hair wildly curling like sharp whips, eyes unnaturally big and the smile he thought was kind were filled with sharp teeth; a shark’s deadly grin that spoke,

Then he jumped back, only to have the back of his head connect with the edge of a table, knocking him unconscious again. 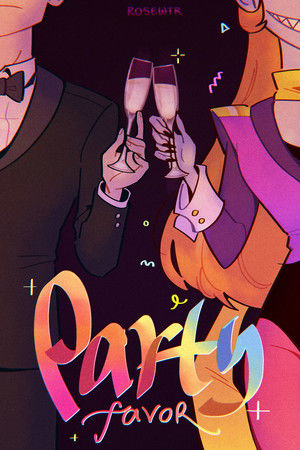