Shintaro Kiriguchi had been building up to this moment.

First-year was a flop, in his eyes. It wasn't bad, exactly. He had friends, he enjoyed himself. His class won the Sports Festival and their stall at the Culture Festival was popular. But Shintaro still felt like something was missing. Like his story had yet to truly take off.

Today was different, though. He'd retrieved his school shirt from the basket, freshly washed and dried, and gulped a thick breath of spring morning air. He was ready. Because this time, the first day of his second year of high school, this time he would make the ultimate impression. He would earn a starting position on the volleyball team. He would finally ask a girl out on a date. Maybe even aim for student council president next year? He tossed his blazer triumphantly into the air. To him, in that moment, with the sun beaming through the trees, the possibilities were endless.

And so, he took his first steps toward a bright, exciting future.

Only to be struck by a falling spacecraft.

Next, he's supposed to go to the school gate and say good morning to his friend beside the shoe lockers. But I... don't think there's any Shintaro left to do that...

I can't stand for this. I won't. I... I haven't got a choice. I'm going to have to take this up with the person... thing... being responsible. This is their fault.

Stepping up to the craft, I knock on what looks like the door of the strange, small chrome pod, propped up on three spindly legs. Steam shoots from the seam of the metal casing and it slides open, revealing an unusual silhouette which descends a short set of stairs to stand in front of me.

The creature is a humanoid with light blue skin, with gill-like markings on its cheeks, two on either side. My eyes rolled over it in disbelief. Pointy ears... slightly sharp teeth... messy dark blue hair... if I wasn't in this situation, I might have mistaken them for a really skilled cosplayer.

As I was inspecting the creature, it taps a black collar attached to its neck, which glows before it starts to speak to me.

It pulled out an electronic device and from it projected a hologram that resembled a page. Squinting at it through spiral-filled green eyes, it began to scroll down the projection.

The projection disappeared and the creature stared at me with a peculiarly earnest expression.

"I am here to ravage your planet."

Is that supposed to be better!?

I'm really not standing for this.

"Oh no, you're not. You're going to do something about this." I gestured to the crash site of the craft and the creature turned to look.

"About what? Wait... did I make a mess? Sorry." It kneels down and starts brushing away the dust that was once Shintaro, scooping it into its hands with a kind of guilt almost like when a cat accidentally knocks over a vase.

"Not that! Wait, sort of that!" I exclaimed, flailing my arms.

I need to do something about this fast. If my superiors find out... I'll be fired on the spot. A protagonist killed this early into his story, in a school setting of all places! I'll be the laughing stock of the whole organisation! Does this guy know how hard it is for spirits to get a job?

I pivot toward the creature with a glint in my eye. It's a frankly ridiculous idea, but...

Who said Shintaro had to be dead?

"Yes, human? Have you chosen to surrender willingly?" he responded with an innocence that completely contradicted the intent of its words.

"No. You see, your spacecraft there has vapourised someone very important to me. Since it's your spacecraft, you're liable for the damages." I circled Ezu, tilting up my chin and performing my best impression of a lawyer from a television drama.

I might have overacted a little there... there's no way he'll believe that.

"What can I do to take responsibility?"

"Since Shintaro has been vapourised beyond repair, I need you to do one thing for me." I implored, motioning to push non-existent glasses up my nose.

"I need you to replace him." 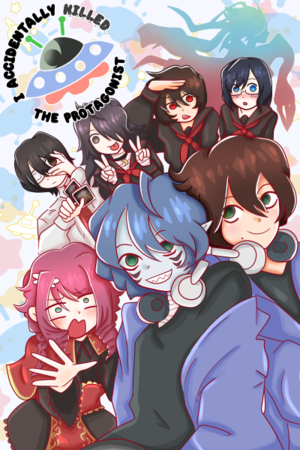