Episode 1 - A Future of Nothing

The technological advancement is constantly reaching limits and breaking it. Humans have learned about the existence of other intelligent life, souls, dimensions and even other universes. They have learned how to travel through wormholes. The Solar System was colonized. All the continents were artificially merged together, forming a mega continent known as Centeron. A great future awaited for humanity.

Or so did everybody thought.

As the tech advanced, more and more people became unemployed because of increase machine work rather than use of manpower. New experiments were conducted on people as only human brain can react to them. With more industries built, land became scarce. The Niagara Falls have dried up. The poles are melted, turning into the North and South Cold Oceans. Water level have risen, and many major cities have already drowned and perished. The rich became richer, the poor became poorer. People with power and money rose to new heights and built for themselves many highly developed cities, while other normal people were pushed towards the edge.

The biggest economic company, Sentient, made new rules and regulations, where people with money under $1000000000000000 (One Quadrillion) will be treated as slaves nonetheless. The world became a place full of sufferings, cheating, backstabbing and fake things. The people who did not follow the rules were punished with direct death, and their souls were then captured to torture for an eternity. Three more World Wars took place, which claimed the lives of more than trillions of people. Fifteen nuclear accidents occured, and the people affected were euthanized with the fear of spreading the radiation.

In the old and underdeveloped town of no name lived a young man with a strong sense of justice and equality, Fubuyu. He was just 18, and already working as a slave to feed his family. His father worked as a slave of lower wage, so it was upon him to take care of his parents. Fubuyu had just one friend, a boy named Bill. They both were good friends, and always had each other's back.

Fubuyu and Bill were sitting on the terrace of the tallest building in the town, watching it all covered in orangish glow and dust flying all around. They both were listening to music, the earphones were attached to plugged in to a single laptop.

"How was your day today, bud?" Fubuyu asked.

"*Streching his arms* Yeah, no good. Had to bear another lecture."

"*throws stone, the stone goes down the building* Huh. You surely have a strict schedule."

"What would you expect? We have to earn something right."

Suddenly, a giant shadow appears above them, blocking the evening light. They both looked above, in shock.

The big ship shot a beam in the centre of the town, and a big explosion took place.

Fubuyu ran down the building. Bill followed. They had to check out for their families.

They both ran seperate ways, as their houses were located away from each other.

He ran and ran, until he finally reached his house. And when he saw it's state, he just stood there, shooked.

His father's upper body was crushed under debris, while only hand of his mother was visible, other parts crushed. Both of them died, and he could do nothing.

From behind the rocks appeared a figure. It was half robot, and half human.

"You... You are responsible for this aren't you?!"

The cyborg looked at Fubuyu, then pointed his gun and shot him. Fubuyu was pushed back, he crashed at a wall and fell to the ground, blood flowing out of his nose and mouth. He could feel his body shutting down, his vision going blurry and all black. Before going out, he could hear the debris falling from above.

Everything was now gone.

But then, he felt energy re-entering his body. When he opened his eyes, he was lying on a bed. Everything seemed normal, but he could not feel his body. He sat upright and looked at his body.

It was not skin!

His hands torso and limbs were replaced with machines. He was now a cyborg himself!

He looked right and saw a man standing there.

"I am Hatch, you can call me Dr. Hatch. And yes, I made you into this thing."

"You ask too many questions, lad. I cannot give you the reason for why I made you like this, but I can assure you that as long as you hear me out, you can protect others as well as yourself from any danger."

"(Thinking) Is it okay to believe this old man?"

"Oh please don't call me that. I said that you can call me Dr. Hatch."

"Yes I can read your mind." 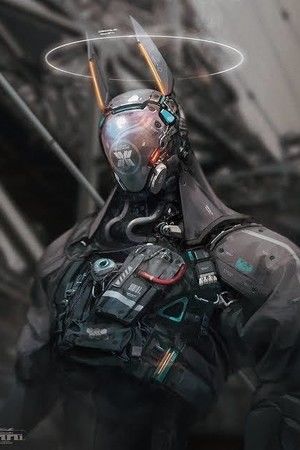