Their sense of time was practically non-existent at this point. The scenery had changed many times from flat lands, to inclined slopes, and even sharp paths that had many obstacles. Minutes, hours, days, weeks, maybe even months. They were fortunate enough to have their codes still functioning, albeit not perfectly. Their fatigue only increased the longer they stayed out. But there was still no sign of any walled city. No lights, no strange structures, just snow and mountains for as far as the eyes can see.

But that didn’t stop them from their hike. The fatigue became more prominent, but it was manageable. As Zsally’s throat slowly became parched, her voice started waning in volume. Even more to that, Erias started walking slower than ever. His breaths were deep and heavy. He was even more lethargic than ever.

With no other choice, Zsally lifted him up and carried him on her back.

“H-Huh?! Z-Zsally?! What are you doing?!” He was bewildered by the sudden actions of Zsally. One would be if they were suddenly pulled and carried in a piggyback position. “Put me down!”

“No! You’re tired! Let me carry you! I still have strength!” She shouted as she continued walking while carrying him.

But she started to sink into the snow the slower her steps became. She had no choice but to quickly move. It was embarrassing for Erias as well, being carried by a girl who was smaller than himself, but he had no right to complain. He was tired and almost devoid of energy.

“Didn’t we promise before?” She asked Erias while he was on her back. “We would go to the walled city together. Although things are different, but it’s still the same thing!”

“… Yeah!” Let’s go together. Erias shouted cheerfully in response to her statement. He remembered the times they were so engrossed with the walled city, they were reading books about it from the moment they woke up till it was time for bed.

Zsally continued to sing, adding lyrics and her feelings as she goes on. Sceneries change constantly but it was still the same snow-covered hell they know of. But then Zsally herself knew that she could not make it. She had lost all feelings in her arms. It was still warm but it was stiff. It was like that of Erias. Her feet were starting to go numb as well. Although she didn’t feel the coldness of the environment yet, she can feel a tingling sensation around her face.

Erias, who was on her back, was silent the whole time. Even while she was singing, he never spoke. She asked him a few questions, but only received a few answers from time to time. All answers were just a mumble of mouth, no strength to even clearly say ‘yes’. She was worried. She knew that he might be at his limits, but she forced herself to believe that he was still all fine. Maybe he was just sleeping and sleepy.

Zsally also neared her limit after some time. Her pace slowed down, her hands had gone stiff, her legs were numb, but she continued to march. She continued her singing despite her dried lips and parched throat. She wanted out. She wanted to rest, but she knows if she rests, everything was over. When she thought of such, there was a strange light in the distance.

She was hallucinating, it was impossible for a light to be there in the middle of this frozen hell. That was her sincere thoughts, but the closer she got, the more the lights became defined. Not only that, but there was a weird shape, uncommon to the usual surroundings. It had straight sides and more lights came into view. Her enhanced sight enabled her to see things like walls in that area. She was elated.

“E-Erias! Look!” She tried shaking him up and leading him to the direction of the lights. “That might be the walled city! We finally reached it!”

Erias, who was asleep for the most part, exerted the last of his energy to see what Zsally was referring to, and indeed saw it strange. There were bright lights everywhere in that direction. His eyes were not as strong as Zsally’s but he knew that was something different. He thought it was some hallucination that Zsally thought of, but he, himself, saw it too. So, it must be real. He didn’t have enough energy left to reply, but Zsally felt that he was just as elated as her to see the walled city they have always been dreaming of.

“Let’s… Let’s go!... Only a few… more.” Zsally spoke softly while she continued pushing the snow with her legs.

In that area, where all the lights and large walls were, was a group of people facing screens and a large glass window. He squinted his eyes as he observed the screen. He zoomed as much as possible but only saw a strange shadow in the distance.

“Cap! Take a look at this.” He called his superior who was nearby and directed him to the screen. “It’s something, but it’s moving as well.”

The captain observed it for a while until he gave orders for the man.

“Keep observing. Notify me if anything else happens. It might be some cyborg from other shelters.”

But as time passes on, there were no major movements coming from the shadows. It was moving, but at a very slow pace. It had entered the range of their cannons, so it could be destroyed at any given time, but the captain had just ordered him to continue observing.

“Cap, I think we should send out a scout. Even if it is a cyborg, we have EMF grenades and rounds.”

“… Alright, organise a scout team of three. Send them out if there are no further movements.” The captain spoke after a brief pause.

“That’s impossible. No one could survive this hell without power suits. Even enhancement drugs could only get you so far. So, I think that’s either a cyborg or some mutant another shelter made.”

The man contacted a few people, building a team and preparing informing them of the plan. They were to be sent out as scouts on bikes to investigate what the shadow is, but will only head out after once given the orders.

Zsally’s footsteps were heavier than ever, her body was almost half buried considering she was carrying Erias on her back. But she refused to give up. At one point, her body stopped moving. She wanted to rest. At this time, her belly warmed up considerably, but it was painful.

So, this is what they call hunger? And dry lips and throat is thirst. It’s uncomfy.

She thought to herself. The numbness and stiffness of her arms and legs didn’t bother her as much as hunger and thirst, but it was still detrimental, nonetheless. She continued her journey to the lights, to the walled city, to Drablavs.

At one point she tripped, burying herself and Erias in the snow. Strangely, it was comforting to Zsally. The snow that was perceived to be as cold by the others felt strangely warm. She wanted to sleep then and there. She wanted Erias to know how warm the snow was, how wrong the people were. But she remembered, they wanted to get inside the shelter itself. She got on her knees while slowly placing the lethargic Erias on her back once more.

He was stiff all over, especially his arms, but Zsally didn’t mind that at all. To her, he was just sleeping and feeling cold. So, she marched on, ignoring her stiffened arms and fingers and her numbed legs and feet.

The closer she got to the walled city, the more fascinating it became. The walls were so high, the lights were blinding, and even the large door was magnificent. She had finally reached the final destination. Her dreams had been realised, along with Erias’.

The door opened, and as it did, she walked right into it. There were people in white robes and others in black suits. A multitude of whiteys and blackies, but that didn’t faze her at all. Some whiteys immediately rushed to them and told Zsally to let go or Erias so they can administer drugs to him and save his life.

Zsally, whose legs finally gave out, was also lifted onto the same wide bed as Erias to be treated. As Erias slowly opened his eyes, he noticed Zsally beside him. He had a tear in his eyes and spoke in a soft voice.

“We finally… made it… to the walled city… Let’s tell the… others…” He spoke in chopped sentences and so soft that only Zsally could hear it.

“Yeah, let’s tell them!” She replied softly in response.

Not long after the light in Erias’ eyes disappeared, they placed a mask on top of his mouth and nose. Zsally, as well, felt her conscience seeping out of her body when they placed a mask on top of hers. She tightly gripped Erias’ hand, not wanting to be apart from him. Although she regretted that she can’t be with her sister, she was more than happy to be here with Erias.

The world had become silent. It was warm yet her own slowly turned cold. She was fearful. She feared the cold. Even the tears she let out frosted. As it continued flowing, her vision slowly dimmed. It darkened every second until it was pitch black. It was dark and cold even she was tucked in a white warm bed. But she noticed a strange light. It was just light, no substance, no form, and she can’t reach out to it. But it was strangely comforting. She gave up all resistance and let the light envelop her. She gave up thinking and let the light engulf her.

It was so bright, blinding even, but the light in her eyes had finally disappeared.

The frozen hell along with the raging blizzard seemed to have warmed and turn silent. The mother leads those who have lost their way to her bosom, caressing them and praising them for their efforts. The weary children are laid on her bed to rest and is tucked gently in her white and beautiful bed and blanket. The mother kisses them goodnight and sings a lullaby. Her mellow voice warms the children, comforting them, providing respite. All these for the children who would continue their journey after their slumber.

~Excerpt taken from the book Song of Slumber and Silence, written by Krisostos Kirjeiyn

NOTE: Thank you to all the readers and support :D.  Even with all the delays. I guess the story may have been a tad confusing or inconsistent, but I still thank you for reading. Until next novel. 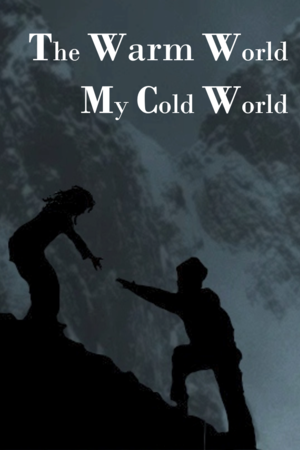