Odds Of Forming An Unusual Club

The school bell is a nearly daily interruption that has the power to disperse my established cloud of thoughts. The idea that popped into my mind a few days ago has to be put into action by tomorrow. Tomorrow is the day of presenting the concepts for a potential new kind of school club. We already have a literature club, an art club, and so on, but has anyone ever thought of establishing a botanical research club? Regrettably, the answer is no. Why would someone want to learn more about the plant kingdom?

"Hinata-san, please stop staring out the window. Look at me!" Mitsuko, the current class president, states. She was chosen on the first day of our senior year of high school, which was two days ago.

Mitsuko is a seventeen-year-old girl with azure hair, lovely lilac eyes, and a lean physique. Her hair is pulled back into a ponytail with fringes on the sides. She is wearing a purple skirt and other purple touches on her school uniform. Additionally, she is very talkative and outgoing. Despite all that, she has severe difficulty finding the club members.

"Why do you have to be so bothersome? At some point, I would have noticed you. So, what's the deal?" I respond.
"Well, after giving it a lot of thought, I've decided to give you a chance to join my abstract art club. Since we are friends, we ought to hang out more often." Mitsuko tries to explain.
"You could have asked me the same thing earlier. You are not the only one who is currently in desperate need of club members." I say, shrugging my shoulders.
"Don't be like that! I was embarrassed to ask you because I had no members at all." Mitsuko attempts to defend herself.
"Neither do I. Besides, maybe I should just give up. My obsession with plants is pointless."

This time, I am not bothered by the same school bell. In fact, it helps me relax because I don't particularly enjoy talking to Mitsuko-san. She has a propensity to annoy me. The break is over, and biology is about to begin. If biology were limited to botany, that would be my favourite subject.

Another sound that can disturb the brain is the alarm clock. After shutting it off a couple times in five-minute intervals, I finally choose to wake up. Normally, brushing my green hair and fringes is not a difficult task for me, but today is different. Today, in front of everyone, I will write the name of my club on the board. Just thinking about it makes me feel uneasy. I'll admit that I'm a bit stressed about the chances of my club becoming an official, reputable school club while not many students seem to be interested in botany. On the other hand, though I am not sure exactly why, I feel confident and at ease. I would be willing to start the club even if there were no other participants. It would be a waste to allow my lifelong love of plants to be destroyed because of my embarrassment.

I'm finding it difficult to maintain my composure while I wait for the first lesson to end. After this, I will have my chance. Honestly, I can’t recall the last time my impatience won over me. After a while, I find myself gazing at Mitsuko-san, who is sitting in the front-right corner of the classroom and is absolutely not following. She is currently drawing something in her sketchbook rather than attempting to solve the equations we have been given. When this lesson is over, I wonder if she will be as eager to show it off to everyone as she usually is.

"Hi, Hinata-san, right? My name is Fulvius and, ah, although it may sound strange, I'm actually quite interested in botany as well. I want to join your club."
"I'm not buying it. Listen, if you're serious, you'll have to show me that I'm wrong. Nothing more, nothing less."
I can't deny that my heart rate has accelerated. A good-looking guy with a passion for botany. Is this a dream, I wonder? That same voice startles me before I even finish counting the fingers on my hands to assure myself that I am fully awake.
"I really mean it. Please trust me." Despite my provocative tone, Fulvius-kun states it clearly and with unshakeable certainty.
"All right, for the time being, I'll believe you." I respond while trying to contain my unexpected burst of joy.

Why would he, of all my classmates, want to join my club? Not that I have anything against it, but it just seems too good to be true. Fulvius-kun is said to have transferred to our school this year due to family issues. Aside from that, I'm at a loss for information on him other than my (perhaps hastily formed) belief that he is noteworthy. The most exciting part of the game is now underway. It's time to make suggestions for new clubs. The Botanical Research Club has to be one of them now.

I'm wondering if Mitsuko-san found any potential club members. Surprisingly, she walked out of the class without looking at her classmates. She left the sketchbook she had been using for drawing earlier on her desk. Something is compelling me to look into it. She didn't want to brag about it like she usually did. It is a sketch of a young man whose hair and face contours resemble someone from the class. Without a doubt, it is Fulvius. Quite intriguing. Does she feel something for him? 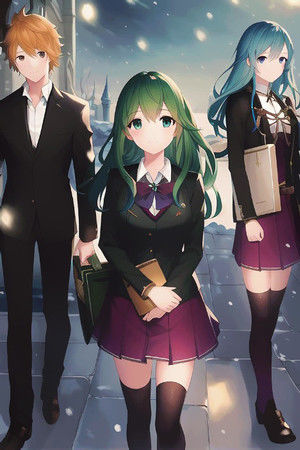