My First Girlfriend is a Fox

We are set in Setagaya, it is the middle of summer and we see a young man leaving his apartment and going to work. His name was Kazuto, a blue-eyed 21 year old man with black hair, wearing black jeans, black sneakers with red stripes, a silver t-shirt with a otaku convention logo, topped off with silver rimmed glasses and a black digital watch on his left wrist. „Ok Samba! I'll be back very soon!“ Kazuto said to his German shepherd Samba after closing his courtyard gate and heading off to work, to which she responded with a playful bark. He took his usual subway line leading to Shibuya which is where he works.

As he got off the train and continued towards his destination on foot, he observed the usual sights. The city was bustling with people, all having their own goals and stories to tell beneath the surface. This of course included girls, but sadly for Kazuto, they always appeared to be taken, and those which were single never looked in Kazuto's direction. Kazuto for years has been either ignored or bullied by women despite him not doing them any harm. His lifelong dream has been to one day find his soulmate, but alas it never happened. „I can't think about that now! I've got to stay focused for work, it is Friday after all and I've  got to close this week off with a bang.“

Kazuto arrived at work shortly, sat at his desk and started working. „As usual I see you are the first to arrive.“ A voice of a person who entered the office said to Kazuto. The voice belonged to Shingo Miyazaki, Kazuto's colleague from the same division. He was about the same height as Kazuto, and a few years older. He had blonde hair complemented by radiant green eyes and was wearing a white short sleeved button-up shirt, green cargo trousers and brown sneakers. „Well, you know that the earlier you start, the earlier you'll be done. And I want to be done as soon as possible today since it's weekend and all.“ Kazuto said as he turned around to face Shingo. „Fair enough, you've always been a hard worker and your relaxation time will definitely be deserved.“ Shingo replied as he sat down as well, and started working. „So got any plans for this weekend?“ Shingo asked. „Nothing too big. Why?“ Kazuto replied. „Well it's just that Ippei and I were going to invite you to a little get-together. It's not as serene as you'd most likely prefer it, but it's got good traffic and you might even be able to find yourself a girl.“ Shingo said with a slight hint of encouragement in his tone. „That's very kind of you, and I appreciate your offer, but….you know it will take time for me to heal and start trusting others again.“ Kazuto replied in a shy tone. „I see. Well I won't press you if you don't feel up to it. I just hope you'll soon be able to open up again and make up for what your missing out.“ Shingo said. „I hope so too, and I'll do it on my own terms and my own pace.“ Kazuto responded. The two then continued to work on their projects which they both successfully finished before calling it a day, leaving only a few of them open for next week when they return.

Kazuto was on his way home now, he already got off the train and was back in Setagaya. He was walking through a street not to far from his house when he noticed a very peculiar sight, a little scarlet fox wandering around the area curiously and making cute fox noises. „Whooaa! It's a cute little fox! Look at it!“ Kazuto exclaimed after seeing the cute fox which was nothing unusual for him since he was a big animal fan, but what was unusual is seeing a wild animal in a relatively urban area like this. The fox was also not too frightened at all but rather she observed Kazuto with a curious look on her face. „Oh! I know! You want some little fella?“ Kazuto said as he pulled out some leftover peanuts from his backpack. The little fox backed up for a slight bit, but it approached his hand in the end, sniffed the peanuts and then ate them with delight after-which the fox gave Kazuto a cute smile. „Oh you're sooo cuuute! I so want to take you home! Although I should probably make sure that you aren't someone's pet already, and that Samba won't complain about me bringing another pet into the house.“ Kazuto said to himself as he was contemplating the decision of whether to bring the fox home or not. While he was thinking about what to do, the fox sat down and looked at him with anticipation. „Awww how can I refuse something so cute! C'mon buddy, off we go!“ Kazuto said as he picked up the little fox which happily jumped into his arms, and proceeded to bring the cute little critter home. While walking, the fox climbed on Kazuto's shoulder like a parrot would perch on a pirate and of course Kazuto couldn't resist to give her tickle under the fox's chin.

They soon arrived home and as expected, Samba greeted the two with some barking. „Hey Samba! I'm back finally, and look, I've brought a little furry friend along, I'm sure you two will get along great! I don't wanna see any fighting now!“ Kazuto said as he set the fox down next to Samba while she was still barking. The two were sniffing each other's noses with the fox showing off some of it's innate shyness, but the two soon started playing with each other as soon as Samba didn't show any signs of harm towards the fox and started tickling the fox playfully with her nose to which the fox made some cute noises while the two were playing. „Who wants some cookies!“ Kazuto exclaimed as he got inside the house and the two animals followed him.

Samba was now lying on her doggie bed and happily nibbling on her cookie, while the little fox was doing the same while lying on Kazuto's desk while he was doing some graphic design for his streaming channel, which the fox started observing with a mesmerizing facial expression. After enjoying some dinner with his two fluffy pets, Kazuto has decided to call it a day. Despite not having any bigger plans for the weekend, he still felt that it was best to get some rest early. As he was lying in his bed, the little fox climbed up the bed and cuddled up to him while looking at him with a timid yet adorable facial expression. „Oh! Came for your cuddles?“ Kazuto said softly to his foxy companion. The fox then hopped on Kazuto's chest and curled up comfortably after-which Kazuto cradled his foxy companion. While slowly drifting into sleep, Kazuto's attention was caught by a shooting star, his first ever shooting star he saw in real life. „Whoa! A shooting star!“ Kazuto said softly at the beautiful sight. „Alright! This is your chance! Please! Heed my wish! Let me find my one true soulmate!“ Kazuto said as he closed his eyes and focused on his wish after-which he took one last look at the starry night, before going to sleep.

A beautiful morning has arrived. It was around 7:12 and Kazuto was slowly waking up as he felt a furry ear tickling the underside of his chin. He formed a delightful smile as he remembered his little fox that he brought home yesterday. He was gently turning his head to look at the fox, however, the fox was nowhere to be seen. Instead, lying beside Kazuto was an incredibly stunning, well endowed and gorgeous scarlet haired fox girl with bangs that covered her right eye, completely naked, with a very bushy tail and pointy ears, all the same color as her hair, with some minor beige colored fur peaking out of the ears. The girl was sleeping peacefully, but Kazuto the more he looked at her, the more he couldn't believe it for multiple reasons. Firstly, the fact that a gorgeous girl was in bed with him naked for the first time in his life, said girl having fox's tail and ears and to top it off the girl was comfortably snuggled next to him, with her head resting on his chest and her well endowed breasts pressing against his side, all these factors were causing him to blush very intensely. The girl started to wake up as she slowly began opening her eyes which were colored blue and were sparkling beautifully. „Good morning.“ The girl said in a sleepy tone. „G-G-G-Good Morning! Ehehe!“ Kazuto said nervously as he continued to blush. The girl's face suddenly became a lot more aware, after-which she slowly moved her gaze downward and slowly but surely realized that she was stark naked in bed with a guy, turning her face more and more red. „KYAAAAAAAAAAAAAAAH!!“ The girl screamed after coming to this realization, delivering a powerful smack in the face to Kazuto afterwards who fell straight to the floor as a result. 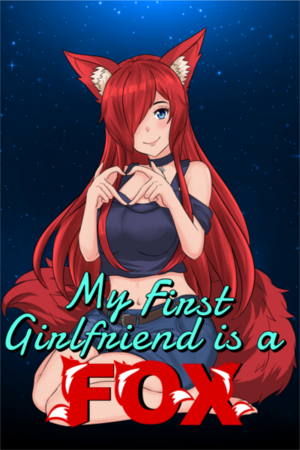 My First Girlfriend is a Fox