“It’s a beautiful morning here in Miyazawa,” the radio on Natsuki’s nightstand proclaimed. “High fifties, the perfect temperature to go out and seize the day! The cherry blossoms are out and about, the sun hangs high in the sky, and the local students have begun their return to school. This next song goes out to everyone of the next generation waking up and starting their high school journey today…”

As the latest catchy pop song drifted out of Natsuki’s radio, she scrambled around her apartment. Maybe her parents had a point about laying out her uniform the night before, but Natsuki had been bouncing around her walls too much in anticipation of her first day at high school to pay them any mind.

She sighed in relief as she found the gray skirt tucked away in a drawer. As she hastily slipped into it, her eyes couldn’t help but peak outside into the April morning; cherry blossoms glided past her window, falling to the avenue below.

Natsuki raised and clenched her fist. Today was the start of her high school self. For too long, she had ambled aimlessly as part of the go-home club in middle school. High school would be different. She would seize the day! She would find herself!

…once she found the rest of the uniform, at least. She scurried around her room, then smacked her forehead and sprinted to the bathroom. The white shirt hung from a hook on the back of the door. One arm through a sleeve, one arm through the other! Clumsy fingers far too excited for their own good did a rough-and-tumble job of tying the red ribbon, but that’s alright, Natsuki was a rough-and-tumble girl!

She briefly tilted her head towards the mirror to confirm this; to keep her brown hair from falling into her eyes, she haphazardly stuck a hairclip to her bangs.

Natsuki hurried back to her room and tossed pens and pencils and notebooks into her blue bookbag, but then paused as she reached the last notebook. This wasn’t just any average notebook - this was her story notebook. She never knew when inspiration would strike, but that just meant inspiration could strike at any time! Better to keep it on hand just in case.

That notebook she placed into the bookbag with care. After that, she slid across the hardwood floor into the kitchen. She popped a piece of toast into the toaster, then kicked open the fridge with a spare foot and retrieved her bento for later that day. She spun around, slipped the bento in her bag, used her hip to close the fridge, then pulled the toast out of its temporary home right as the toaster pushed it upward.

Natsuki felt like a force of nature that morning. She was unstoppable, she was on fire! And so was the toast; she yelped and let it cool off on the kitchen counter while she closed her bag and hoisted it over her shoulder.

Holding the slightly cooler piece of toast in her mouth, Natsuki arrived at her front door. She slid on her brown loafers and turned to face her family’s apartment. The only way to seize the day would be to go outside and…well, seize it.

Gotta work on that, she thought to herself, already preparing her daily journal entry in her mind.

Natsuki waved goodbye to the apartment.

A gust of cool air immediately greeted Natsuki on the other side of the door. What a day! Despite all the blossoms falling around her, many more remained on the trees; mixed with the greenery of other trees and bushes, it felt like a whole kaleidoscope was out there greeting her. Behind the power lines running overhead, the sun shined brightly and white clouds rolled across the blue sky.

Feeling all that energy inside her, Natsuki took off running down the avenue. It felt like she could go anywhere! Natsuki decided to head down the coast, but then shook her head - today was a school day! The first one of its very kind.

The night before, the last night before she officially became a high schooler, Natsuki wrote a simple journal entry - make the most of your new life! That’s what she intended to do. Natsuki had never run like this before, feeling the wind rush by her as she turned the corner and headed down a much larger avenue. Colorful apartments and cars and people and sky stretched all before her, the distant Miyazawa Regional High School on its hill providing her with today’s destination.

Natsuki extended a hand, reaching out toward the high school and everything it meant to her.

She now placed that hand (along with the other one) on her knees, wheezing and panting after running for about two blocks. Come to think of, the high school was a good forty-five minutes away.

Natsuku tilted her head to a nearby platform.

Approximately five hours later, Natsuki did her best not to scream.

While not being in the same class as her best friend Mitsuko from middle school wasn’t exactly the funnest thing in the world, it was alright! Natsuki’s Class 1-C would provide a whole new source of friends.

Friendship was the other aspect of seizing her new life. Mitsuko was Natsuki’s best friend by default - she was her only friend in middle school. Natsuki, for all her energy, had a very bad habit of clamming up around people she didn’t know.

And Class 1-C consisted entirely of people she didn’t know. But that’s alright! It’s not like anybody knew anybody in that class, right? They were all new students, after all. As Natsuki sat at her desk, watching more of her classmates stream in, she crossed her arms and closed her eyes in smug pride.

That’s right. I’m no different than anyone else here. We’re all wayward babes in the woods, young doe just trying to stand on our two feet. That’s why we must stand together!

She opened her eyes, ready for all her new classmates to talk to her, but horror slowly rose within her. This might be a case where she’d have to reach out to them! Already, her classmates had formed small circles of conversation. Natsuki couldn’t just break into a circle like that. She’d bounce right off, or more realistically, stand awkwardly behind someone until they noticed her presence. Then she’d have to make an awkward introduction, she’d interrupt the flow of their whole conversation, and she’d be marked as Natsuki the Foolish Interruptor for the rest of her high school life.

Natsuki buried her face in her hands. It’s hopeless. I’ve missed my chance.

Natsuki peeked through her fingers. Usually this would be around the time when, just as all hope seemed lost, an unexpected classmate would come by her desk and introduce themselves. Yes, the outstretched hand of Natsuki’s comrade would represent the start of her new life.

No hand came. As she watched all her classmates split off into their own groups, Natsuki understood a fact of life. High school was a swamp. Only the real alligators would make it out. And Natsuki was the exact opposite of an alligator. A muskrat, perhaps.

Leaning against her locker at the end of the day, Mitsuko took a long sip from her juicebox. “Muskrats get scared really easily. They dash off the second anybody gets close. But-”

She raised a finger.

“They’re also kind of dumb. If you remain still, the muskrat won’t even realize you’re there. They could even approach you, not understanding they’re actually letting you get close to them.”

Natsuki waved her hands. “That’s what you got out of my sad experience today?!”

“You’re very much like the mighty muskrat of the plains,” Mitsuko continued. She had well-kept black hair and wore thick glasses that hid her eyes; her current smirk looked as wide as possible. “You find too many people overwhelming. Groups feel impossible for you to approach. But if you can get one-on-one with somebody, you feel far more comfortable.”

Mitsuko let the sound of a juicebox sip answer for her.

Natsuki sighed. “We’re different animals, Mitsuko. You see, you’re more like the Mogami River. Gathering all the energy around you, channeling it into a fierce swiftness that carries you right toward your destination. Me? I’m more like the Tama River. Surrounded by too many people and prone to flooding. And when you flood people with your emotions, they’re more likely to think of you negatively. They take one look at me and think I’m a bad river.”

Mitsuko tilted her head. “I thought we were talking about animals.”

Natsuki sighed again. She hoisted her bookbag over her shoulder and prepared to leave for home, but she felt a tug on her collar.

“Where are you going?” Mitsuko asked.

“Home,” Natsuki answered, her eyes downcast. “I blew my chance.”

“You’ve been in high school for six hours.”

Natsuki yelped as Mitsuko started hauling her toward the school courtyard. “Let me guess,” Mitsuko said. “Because you feel like you’ve blown your chance, you’re not even going to bother with the club fair.”

Natsuki resisted Mitsuko at first, but ultimately relented and allowed herself to be dragged across the linoleum. “Like a shipwrecked man turning to seawater from uncontrollable thirst,” she said glumly, “I deluded myself into thinking I had a chance. But that chance was never there in the first place.”

“Don’t spiral on me,” Mitsuko said firmly, but Natsuki was already spiraling.

“Oh, there’s water everywhere, but not a drop to drink!”

“Natsuki,” Mitsuko began. Natsuki gulped; when Mitsuko used that tone, she meant business. “I know for a fact that if I allow you to leave, you’ll phone me tonight, crying about how by believing you missed your chance, you actually ended up missing your chance. I don’t want a phone call like that tonight. The only reason you should call me tonight is to talk about the new episode of Fudge Sundae.”

“Oh, the animation in the next episode preview looked pretty good, didn’t it?”

“Exactly.” When they arrived in an empty hallway, Mitsuko stopped and hoisted Natsuki to her feet. They were just about the same (short) height, but Mitsuko always looked calm and composed while Natsuki’s emotions always leaked out of her, for better or worse.

“You told me you wanted to change yourself,” Mitsuko reminded her.

Natsuki looked away and twirled a strand of brown hair around her finger. “What happened to the message of just being yourself? Maybe I’m just a muskrat who runs away. That’s just who I am.”

Mitsuko tilted her head and smiled at her best friend. Her gray eyes became visible behind her glasses, looking at her with equal warmth. “Don’t just strive to be yourself. You should strive to be the best version of yourself.”

From that hallway, they could hear all the commotion in the courtyard. Hundreds of students would be out there, visiting all the booths within the club fair. The school had dozens of clubs, each one offering new opportunities. Going home didn’t offer anything new. 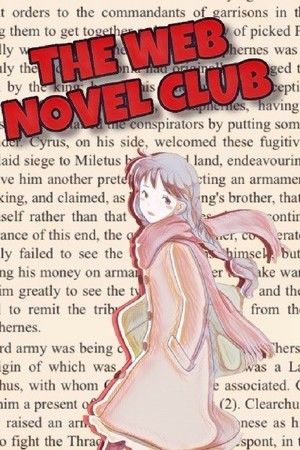