Vidrio had started out as a dream, a computer-programmed project named Earth 2. Trials of experiments had begun and been repeated throughout countless failures spanning decades. Scientists from all over the globe contributed to the work first pursued by a group of scientists whom some called “Masterminds:” Dr. Ray Sano, Dr. Hekima Kikuchi, Dr. Tara Cruz, and Dr. Rachana Joshi. With such an extreme project on their hands, a laboratory located within a jaw-dropping space station neighboring Earth in the Milky Way galaxy became their home for months at a time. Over many years, the four led professionals and amateurs alike through a series of tremendous breakthroughs which eventually led to the development of Earth 2’s own artificial source of gravity. With gravity, the possibilities of sustainable life on another planet became more apparent. Plants and oxygen, water, solar powered technological advancements—the “Masterminds” and their worldwide team of scientists worked around the clock, nearly possessed by the awe of it, to make this dream-like planet a reality. Bookmark here

As an unexpected degree of progress had been made and public interest in the project skyrocketed, several billions of dollars in funding poured in from all major nations. The world was these scientists’ audience, and everyone was hoping for a time-stopping success.Bookmark here

Only, time did stop, and the world stopped spinning. Even the four Masterminds had hardly seen it coming. The months leading up to this cataclysmic event were chaotic. Terrifying. The discovery that the world was ending came suddenly and news blew across the seven seas at a frightening pace. And the news came with a message: There was no way to stop Planet Earth from collapsing. With only two months to spare, all the power of science could do then was to help desperate individuals prepare for and conduct mass evacuation procedures onto an infantile, man-made planet. Vidrio, as it was newly named. Bookmark here

The Masterminds knew Vidrio was imperfect, but in the little time that was left of their home planet, Vidrio was all anyone had.Bookmark here

The source of their worries was Planet Vidrio’s incapability to adequately inhabit human beings the same way Earth could. Oxygen was only the starting point. It was Dr. Rachana Joshi who nearly died while making the discovery almost seven years before Earth’s demise: A human being could survive five-and-a-half days on Vidrio before losing stability of their cerebral impulses—and dying. Because trees and other plant life continued to survive on Vidrio, it was hypothesized that an individual required a personal connection to the land. The same way plants had roots and water sliced straight through the land, humans needed to be equipped with something like SIM cards are to cellphones, a type of compatibility with the land’s source of energy. Bookmark here

A year later—six years before Earth’s end—one hundred-fifty volunteers from all over the world had agreed to have computerized chips the size of memory cards surgically implanted into their head to interact with their brain’s neurotransmitters, with hopes of surviving longer than five days on Vidrio. Aside from a unique side effect which turned each volunteer’s hair the color of lightly frosted glass, nothing went amiss. Their survival confirmed the need for computerized chip implantation into anyone who intended a long stay on Planet Vidrio.Bookmark here

Now, Earth’s eight billion residents had just two months to receive their chip. Scientists and medical professionals everywhere did what they could for as many people as possible, but all knew that, on the higher end, four billion was optimistic. Eight billion was impossible. The most anyone leftover could do was risk their chances on Vidrio as they waited to receive a chip.Bookmark here

The reality of life on Vidrio was at first clouded by loss, trauma, and attempts at recovery. Incredible amounts of people, having failed to part with their treasured possessions, beloved pets, or critically disabled loved ones, had been left behind on the doomed Earth. People from everywhere, some who had never been anywhere besides home, were now making efforts to relocate loved ones and lost contacts on the new planet. Orphaned people needing therapeutic interventions were comforted by strangers. The shock of what had happened hung over the minds of many, leaving mind-numbed puppets milling about the masses. Bookmark here

Once the fog cleared, though, so became evident that Vidrio was not equitably everyone’s ideal living situation. Patience among the new neighbors who were yesterday’s enemies quickly ran thin, for Vidrio had just one “land,” and the land was as unorthodox as it could get. The former Earthlings were scattered among four plates of land stacked one atop another, each seeming to hover 1,000 feet above the last. The structure of a gargantuan floating tower made entirely of glass. Bookmark here

The bottommost layer of massive glass land stretched just over 16 times the size of the United States of America. Beneath that lowest plate was endless blackness, the sort of dark one could only visit in their sleep. Looking straight down through the bottom plate revealed to every new inhabitant of Vidrio that the entire tower, the only visible land mass for miles on this new planet, was floating above an abysmal death trap. One could only imagine what was beyond all that nothing.Bookmark here

Those who had traveled to Vidrio first had gained access to the higher plates of The Glass Tower, whereas later arrivals were confined to the lower plates. Unnerving as it was, former world leaders tried assuring people that the ideal situation was to band together, to rebuild, and enjoy a shared peace; that Earth’s previous nationalities no longer mattered; and that humanity was now part of something much bigger than territorialism. With such scarcity of necessities like homes, hospitals and other health facilities, schools, police stations, jails and courthouses, fire stations, among other things that had been available on Earth, humanity needed every indiscriminate helping hand on each layer of the tower to build—and reimagine—life in this world of glass.Bookmark here

But fear and greed had a history of overshadowing humanity’s virtues.Bookmark here

Within less than a year of inhabiting The Glass Tower of Planet Vidrio, one of the Masterminds, Dr. Ray Sano, realized something that changed the dynamic of life in The Glass Tower. Like hundreds of people during their efforts to restructure lands and reorganize the population, Dr. Sano had traveled to all the levels of the tower via gravitational platforms designed to behave like elevators. However, he was the only one to notice how the glass levels differently affected the human body.Bookmark here

The higher he was on the tower, the more energized he felt, the healthier the energy powering his brain made him feel both mentally and physically. The more alive he was. In comparison, he felt near death on the lowest level.Bookmark here

It all made sense to him. The levels of the tower were doubly powered by computerized means as well as through solar-powered energy to enhance the tower’s sustainability. And like the levels of the tower, humanity was now intimately dependent on the supercomputer to keep their brains functioning and, in a way, their bodies charged. Therefore, as the largest plate at the bottom of the tower received the least amount of sunlight and was also the most densely populated, the more the land’s energy was divided among its inhabitants. Bookmark here

Wanting to take advantage of this phenomenon and keep its benefits to himself, Dr. Sano tricked the other Masterminds into modifying the programming of the tower. To honor their contributions as the scientists who saved humanity, he claimed, the four should designate a name and color to each of the tower’s glass plates of land.Bookmark here

The moment the four scientists entered this information into the tower’s control center, the plates of land flashed into color at once—a beautiful, colorful dance. Vermillion, Rosewood, Orchid, Cerulean. Most beheld the transformation in awe, some complained about the colors’ brilliance, and others sat back silently and seemed to know how things would change. When everyone looked around next, they realized that their hair had undergone the same color transformation as the plate they currently stood on: Vermillion hair on the lowest plate; Rosewood on the third plate; Orchid on the second plate; and Cerulean on the first. Bookmark here

While it was fascinating, the truth was dire. The inhabitants of The Glass Tower knew without speaking that they had been implicitly labeled—their hair color their new identity. Bookmark here

And Dr. Sano, his hair now Cerulean blue, reprogrammed the computer the moment his three companions went down to observe the color of their respective level. He ordered the immediate extermination of any individual attempting to cross onto a level of the tower which didn’t match their hair color, forcing the chip to short-circuit in their head upon arrival. Bookmark here

Within moments, the world went from bad to worse.Bookmark here

And worst of all, that was not the end of it.Bookmark here 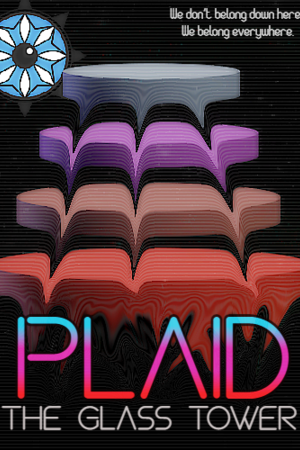