I Turned Into A Boy

Jeremiah: It all started that day.

Meddler: is that so…go ahead, I would love to hear it.

Jeremiah: Oh…That’s really embarrassing...But I feel comfortable with you, so I will share it with you.

Meddler: That’s so nice to hear, go ahead.

Jeremiah: 5 years ago…For the First time, I saw her in our school’s corridor at that time…running and at that time I saw her…That day I was late for class and so was her. We went into the class and her hair was all messy, her face was not ideal…but she had that funny charm…which always made me crack and during class hours, I could see from the corner of my eyes when she is used to turn back to see me, they were occasions when we use to look at each other for few seconds and pretend nothing happened…I was lucky at that time I use to sit diagonally behind her and I could just pretend of seeing the board or looking someone else…But we barely talked to each other, but I always felt like she was there for me, I remember this clearly one day I saw her jawline…I wanted to see it again, I bent…Pretended I was looking somewhere else but it was ….awww I can't say it, I'm tooooooo shyyyy to say it!

Meddler: Wow…It was the first time Jeremiah ever talked about something this much…I feel so happy, I have this weird feeling of someone tickling from inside near my diaphragm…Wait, I want to hear more! I should have done something great like saving a lizard’s life or something to hear his side of the story. Oh…If is that so, then what happened

Jeremiah: Did you notice meddler…You both look a bit similar…Your eyes look the same…With my eyes I remembered this incident, I saw her without glasses and her eyes were beautiful…she had those big eyes. One year had passed till then…But then she suddenly disappeared from school…Then the next day I got to know my parents left me…Leaving this letter...I felt sad, but I continued to go to school…later I got to know, that her parents died in a car accident…It was heartbreaking how the car blasted and she couldn’t even see her parent's body, If I was in her place I would have been even worse. But after 1 month she came back to school…Tired, those sleepless eyes… It was like she cried a lot…I never saw like that…I felt bad, I kinda sympathized with her even though I got that feeling of her death but my dad told me he would return…and He will return in perfect shape…and I know my dad never backs off his word. But I was in pain…on the other hand, Lily was just smiling making jokes, and tackling her life’s problems… At that time I felt she was some strong person out there…were I felt weak, but whenever I looked at her having fun…I got the courage to move on in life. Since that day my respect for her increased. From that day…I started liking her more than…I looked up at her, I actually tried to copy a few things off her…But yeah!! Okayyy!! Stoppp I'm cringing!

Meddler: Wait! I was that great…I use to forget about my parents at that moment…But it worked well…Jeremiah is really opening up to me today, I never thought him to be like this…A humble sweet-hearted person, who was struggling with other problems but he never revealed… I like this side of Jeremiah more than anything. He is humble sweet and cute.

And his Lap is really soft and warm…and that cuteeee little chin hahaha…What Am I seeing I'm such a pervert? But I want Emerson to explain more about him. I don’t know anything about his Dad and Mom...

Meddler: Jeremiah you never told me about your parents? Like what they do and all.

Jeremiah: I will tell everything about them…But before that let's go into the bedroom and talk, it's already late and my legs are numb…You will get a better pillow over there.

Meddler: Wait…Did he just call me fat? Aww, it’s a very insulting comment to a girl who is like a feather-like me. But I'm a boy now so it doesn’t matter.

Both of them went to Bedroom. They slept on the bed and covered themselves with a blanket and Meddler keeps his hand around Jeremiah and hugs him tightly…

Meddler: Come, now tell me about your parents.

Jeremiah: My parents huh…Let me start with my Mom…She was a humble person, but never showed her humbleness…She loved me, I don’t think anyone loved me more than her.

Jeremiah: She was beautiful not only beautiful…She was a beauty with brains, My Mom’s Mother was a school principal…My grandma divorced and they started a school, a school my grandma ran on her principles… But my mom was the one who told me those were wrong and She brought divorced people together.

Jeremiah: About my Dad…He was the best man I had ever seen in my life…He is just so successful, I don’t know if he had any flaws…He use to spend so less time with me but it never disappointed me…He had other work to do, He was so worked up I actually saw him talk to himself. Something like…

I still remember that…I was laughing when he said that…He barely use to talk with me… But I remember he thought me how to solve a Rubix cube that was the only thing he thought…He talked so less I remember all his words…My mom use to tell me when I was around 6-7 months he use to share with me everything…He use to talk with me for hours Like that’s what my mom told me, but how can he expect me to remember all that… Like that was the family time of my parents…But professionally they were scientists…They both started a start-up and made it a really big company…I never went into the company but my mom told me how it all happened…Like how many parents met, when my mom was an arrogant young girl…That thing I can believe…How can that be possible, She Is the most humble person I have ever seen. And how my dad was such an underdog and was called weird names…How his friends bullied him…How he failed in physics…How he just wanted some recognition…As much as I know my dad hated interviews and the public’s attention, how did he want recognition…He became a scientist and my mom says he failed. He was bullied by his friends as much as I remember he was the person who people wanted to talk to, I remember people auctioned for a dinner with him. He did something Marvelous that didn’t want them to get into people’s hands. Both my parents worked as a scientist…And then they left. Oh…I said this much and I didn’t tell their names right…Hahaha so funny, My dad’s name is E---

Jeremiah: Meddler…I think I started liking you as much as I like Lily Rose…It's odd but you remind me of her…I feel happy beside you, I like to be with you more than anyone…I felt a bit of sadness when Jessie proposed to you…But I felt happy when you rejected her. You’re the best thing that happened to me. I think I like you…But doesn’t that make me gay, Am I gay?... It's 2038…It's common nowadays.

But Meddler…I think I’m in love with you. 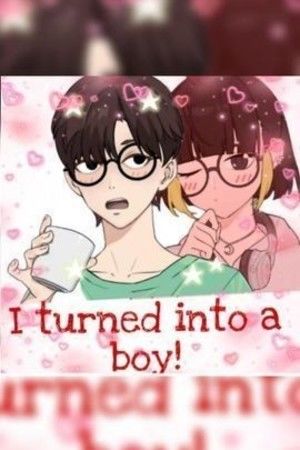 I Turned Into A Boy