I was under too much fatigue to give a fuck about the book.

After I had coughed this fatigue down slightly, I realized the red choke-marks my reflection in the water beneath my chest was trying to bring to my attention.

What the fuck? Was my state of mind.

That strength. Her arms were literally unmovable. But still...... I recalled the scene that had just unfolded a moment ago. Everything from the feel of concrete on the back of my head, the overpowering hands around my neck, the demeanor of my aggressor: her snake like seductive ora, her calmness, her weird speech about paradise, her stone cold

With that much strength she could've... I thought of the worst while again fondling my neck.... "She was enjoying watching me suffer." my eyes widened at my outwardly realization.

Her eyes were cold like that of an animal's staring at her prey without any real malice while her chilling smile conveyed a different feeling. One of pleasure. One of malice.

My aggressor-- my almost grim reaper was about to present herself before me as the last thing I'd ever see before passing on... in the form of a personified Oxymoron.

My introduction to the feeling of an imminent death more than anything else emphasized the peculiarity of life.

"That's....a lot to soak in." This introduction was also making me become more contemplative than usual.

The whole experience in this new world so far--caused me, the guy who didn't like taking off his top in front the other guys during gym to shamelessly sprint through the streets stark naked--me who didn't engage in lengthy conversations with anyone besides my close family and two best friends to become comfortably chatty with a group of strangers-- me who had once turned his attention away from a cat approaching death after being run over from a reckless driver, to instinctively rush in risking my own life

to save the life of again, a complete stranger.

This world was causing Jeiya Aragi to act less Jeiya Aragi. It was slowly having an effect on me. My introspection was put to a halt by a single drop of water landing in the base of my head as if it had

mistaken it for soil to be watered.

After looking up I realized that it was a damp leaf that was responsible. The leaf let out a sigh of relief after realizing that I wasn't enraged with it.

And it was. The leaf, in a matter of seconds, was repeatedly contracting and expanding as if it were breathing-- no–as if it were a lung.

Upon closer inspection, I realized that the leaf was designed exactly like a lung and was only a leaf in outline and color. And also, by the fact that it was connected to a-

"Bronchus....branch?" was what connected the leaf lung to the gigantic tree that smothered the lake I was in as it was literally growing from within the lake. It was so large that it hovered in the heavens above the other surrounding trees engulfing the area in darkness, blocking the skies with only small rays of light escaping through the spaces between the trees.

This helped me put the depth of the lake into perspective. The only reason it caught me just below the chest was because I was standing on a piece of the tree's root as I later realized when I bent down to scoop up the floating book my situation caused me to neglect giving much thought.

The lake was crystal clear as it couldn't reflect the sky's blue. That was how my inner science summed it up.

"I gotta get outta here." I felt myself shrinking again.

I was braced up against the grassy stage that would under normal circumstances serve as an entrance to the lake. It was sloped downwards towards the lake, so it was simple to forklift myself up to surface level.

On my feet I stood, naked in a foreign forest. I felt like Adam. How he initially felt without Eve that is. Exposed and vulnerable. I needed something to act as my stand in Eve, so I searched. Searched and searched.

Head scanning the surrounding area- the dark grassy forest filled with trees of all shapes and sizes with a tree over a hundred feet tall behind me that was so outgrown, its branches extended and entangled themselves with some of the other surrounding trees whilst others helped to separate the forest from the sun's shine.

"Ah. There." I saw something beneath one of the trees. I started to close the distance between myself and that tree sapping the grass with each dripping step I made, damping it.

About five steps away from my target I realized-

"I guess under normal circumstances this would be an ideal spot for a nap." Someone laying on their back with a bamboo hat over their face with both arms behind their head pillowing it.

I thought I'd be a little rude and disturb their nap by lifting their hat off their head. It was also me firing back at this cruel world.

By the time I'd followed through with it-

Disturbing the nap of death. Underneath the hat, was a head with the face bitten off making what remained resemble a bitten apple.

I was losing my shit and on the verge of releasing some. HOW IN THE-- WAS IT A SURPRISE ATTACK? OR DID IT ALREADY HAPPEN AND HE WAS PLACED HER-

"Shit!" I covered my mouth to stupidly try to make up for my mindlessness. I hastily scanned the area for any signs of an impending ambush.

I Scanned and scanned. Till eventually, my nerves burst like a dam causing me to swing the body over my shoulders with the hat and my book in my vacant arm and take to sprint.

Mindlessly dashing through the forest whilst knocking down the small plant life in my way, all on my mind was escaping that area. Evading danger. At that moment, I was acting purely instinctive- like an animal.

The body should've been too heavy for me to break the sound barrier with it but I had adrenaline on my side.

I ran until I had come across a branch in my path that I immediately ducked underneath without really breaking my speed. What I didn't realize though, was that this branch was the prelude to a downward slope that led to a muddy terrain.

Immediately after dodging the branch, I naturally lost my footing rolling down the slope for about 4 minutes, incurring small scrapes and bruises along the way until a slim but sturdy tree broke my fall and possibly my back.

During the fall, the body, book and hat all diverged from me rolling off and finally falling a couple meters away from me. After taking a moment to cough up some of the mud that got into my mouth during the

in the fall, I went over to receive them.

Standing over the body, I felt the terrain beneath my legs. It wasn't grassy like where I spawned or muck like the slope. It was--

The dead's clothes sure have a different feel to them. I thought as I affixed the straw hat on my head. And it really did. A different type of warmth. A warmth that felt morbidly cold. Only a fraction of what the body beneath me felt now that I'd robbed it of the last of its worldly possessions.

I still felt guilty doing what I did even after spending roughly an hour hand-digging a grave deep enough to prevent them from being disturbed and wrapping their violated head with a large leaf from one of the surrounding trees to protect it from further violation.

These clothes could've been a memento of a distant relative or the gift of a loved one or-- Spoush! A good face slap was what I needed. Such heavy thoughts would put me at rest beside him.

After stripping the body down to its bare skin, I could've confirmed that it was indeed him. I also confirmed that he was lying beneath that tree for a very long time. Long enough to have his body to begin to give off a foul scent only my will power could hold my stomach up against. Not long enough for there to be not a drop of blood coming from his head though.

That was what I found even more particular than even his injury. Just what did he run into? Finding out the answer to that soon would be the key to prolonging my life.

His black and white gloves marked "Ying" and "Yang" respectively wasn't as protective, but I still took them as I considered the boost to my style points.

"Alright.... I....I can do this." I said to my shaking palm before gathering my resolve and clenching it tightly.

Navigation took adjustments. The heavy holster accompanied by the sprained ankle my fall gifted me made scaling the slumped over logs of wood, sinkholes, semi-hills composed of larger rock and any other perils this forest's God threw at my way that much more physically straining.

I started thinking that my friend six or so under got out lucky.

Where am I even going? Sure, whatever took off with that guy's life has a thinner chance of catching an unpredictable moving target. But who’s to say I’m not wondering right into its fucking den?!

That made me stop in my tracks. In the middle of a hollow sea of trees absent of mud with the smell of dirt and mush humid enough to make the hairs on my hand rise in alert, I paused briefly.

A pause that could mean my death. I pause that would be necessary in me avoiding death. A deep breath I took then….

Sure, I was probably dumb for that and sure I was scared shitless but that was just who I was. The longer I snooped around mindlessly, the more mindful of my environment I would become.

My detrimental over-thinking. Me creating my own stimulus to react to, in my mind would be in my mind's best interests.

“Are you seeing it?”

I sighed then continued my stroll after giving my voice some time to sink into the forest. “Deep breaths.”

A straight path. I'd describe it as being a bushy road. Thankfully it took the form of normalcy as the pressure in my ankle I'd been neglecting to acknowledge was slowly building to its boiling point and I was sure how much longer I could hold on. The normalcy released some of the pressure.

Nope I couldn’t pace another step. Slumped upon a tree branch, forgetting everything except my agony, I stopped to paint it away. Or down to a level of tolerance.

“No. Your wisdom has taught me that what you recite is foolish. Not only pattern, but impulse as well.” “

And with an exhale, I continued. Down on my sprained leg I went down first. A smooth but painful first step. In the middle of my second step-

“Yes, that's what I am talking about.”

An arrow collided with the padding protecting my left shoulder.

Another arrow straight through my healthy ankle.

“The formula for destruction.” 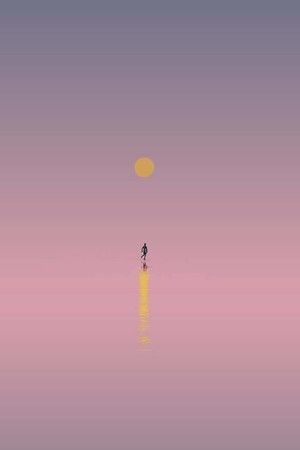