It All Begins (Part I)

I gasped for air while hunched at a 90-degree angle over an old park bench that was placed outside of a bookstore, inside of a mall.

This bookstore was a usual attraction spot for me and my best friend Isami, who I was meeting here.

I had called Isami from a mobile phone that I had borrowed, and I told him to meet me here at this bookstore like we usually do when shopping at this mall. It has been roughly thirty minutes already, and I had told him that I’d be here in thirty minutes, and that was with me running at full speed the whole time. So, he should be here any time now.

The bookstore that was our usual meeting spot was on this mall’s second level, and given the position of the store, it conveniently had a perfect view of the rising elevators and moving escalators that continually moved their way to the upper floors. If I kept watch over the entrances leading to this second level, there was no way that I could miss Isami.

I sat on the park bench regaining my breath as I continuously watched for my friend to arrive. The mall was rather busy today, more so than I had expected. With that being known, I would have to be extra observant when spotting a familiar face. Covering the walking spaces were crowds coming and going throughout the different stores and moving up and down among the different floor levels. I honestly couldn’t tell whether or not I would be able to spot Isami if he was blending in with a nearby crowd.

After sitting on the park bench and waiting for what felt like forever, I looked at my wristwatch and realized that it had been no longer than three minutes. And alas, from out of the busy crowds that caused my visibility to be poor, I saw a familiar face.

Fujiwara Isami, a teenage boy of the age 16 and standing at five foot and eight inches came strutting into my view clad in white shorts, a white button-down shirt, and a grey and gold sweater vest designed with a diamond shaped pattern. He also was donning a pair of gold framed sunglasses along with his signature ash-brown curly hair that he usually spent hours primping.

I rose from my park bench seat and started towards the oddly dressed fellow.

“Hey, you’re finally here. Did you bring the stuff that I had requested?”

Isami lifted a large shopping bag and spoke. “Obviously, now it’s your turn to tell me what’s been happening.”

I rubbed at the choker style tracking device and tried to crack my neck before I spoke. “I don’t know how much time we have to talk, so long story short, I’ve been compromised and am now being monitored by, believe it or not… the CIMEDE Agency…” I pointed to the choker around my neck as I revealed to my friend the unfortunate reality.

“HOLY SHIT! You’ve been compromised by the suits!? Sorry Keisuke, but I don’t think we should hang out anymore. What about Grandpa? I hope you didn’t call me here just to rat me out to your new friends.”

I hit the back of Isami’s head. “Dude, relax. When I said compromised, I meant that they could monitor my location and they’re using me for their gain, there's nothing in it for me except no jail time… and yes, I spent the night in a cell.”

“WHAT THE HELL KEISUKE!? Location? They know your talking to me… their coming for me too! And don’t trust their ‘just location', they're probably monitoring this conversation too!” Isami starting to look around his surroundings in fear, I didn’t know he was this paranoid of the government… and I also didn’t think about this conversation being monitored, so he might have a point.

“Okay Isami, I am going to be housed in the CIMEDE Academy dorm rooms for at least the next three days. I’ll be checking for bugs and then call you from my phone with updates.”

“Woah. Woah. Woah… You want me to give you the Shard of Polaris?”

“No, not give, we work together to find out why Doc was after it, then CIMEDE can have it. After all, once we know where Doc is, it’s worthless to us.”

“Hold on a second Keisuke, that’s what I don’t understand. Why do you think I have the Shard of Polaris? You were the one that was supposed to steal it, and then I spent the whole night looking for you…”

“WAIT ISAMI!? Are you saying that you don’t have the Shard of Polaris? Please tell me you do…”

“Well damn it! I’m glad to hear that you didn’t use my roadkill corpse as a decoy, but more importantly, the Shard of Polaris has indeed been stolen last night! and if you don’t have it… then who does?”

I looked around the mall’s surroundings, very distraught, and considered what this meant for my agreement with CIMEDE. Actually, this was the original assignment given to me before I figured to take a short cut by believing that Isami already had the Shard of Polaris in his possession.

“Sounds like this is going to be a bitchin pain in the ass… Is there a catch?”

“Well…” I gave a slightly confident smile that hid my deep fear. “We have less than three days to get all of that done.”

Isami sighed. “Oh of course! Like I said, this is going to be a bitchin pain in the ass!” 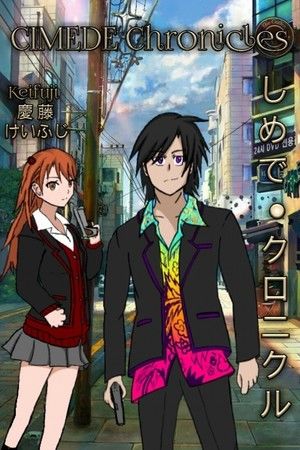