Daggers to the Eyes

The man smirked. If he acknowledges my understanding of the origin, it's undeniable that he knows who I am too. I turned to look at him again as his dark, unruly hair swayed gently with the strong gusts of wind, his eyes affixed to somewhere unreachable.

He returned my gaze and I could sense a hint of despair just before he started speaking, "We have to dismantle the system in order to escape this game."

I knew about it all too well, I didn't have to hear it from him for confirmation. "Game? What are you going on about, mister?" But I stayed clueless. I didn't know this man and I definitely did not intend to be that cuckoo who ignited another war.

He sighed at my reply, this bastard. I watched as he raised his hand at a chest level to check the time on his wristwatch. I observed closely at how this one in particular was composed as a rather fancy piece, a finely carved celestial chart imprinted inside the lense with a metal akin to its black delicacy, alluring to the brim.

"This is a future tech product."

"Did the administration finally give up on their own lousy rules after all? I'd like to see that." He cracked a smile at that and I felt a sense of accomplishment, so I relaxed my composure.

The sun was now almost completely set, the sky had transitioned into a beautiful synchronization of pink and blues that blended into an ombre purple at the edges. The sunrays piercing into the flock of clouds, uninterrupted, forming an image that would be burned in my memory for many reasons.

One of them was a result of my next glance at him, ensuing an offering gesture of his hand to mine with an unwavering smile painted on his face. I could see just how woeful those eyes looked at that moment, passively dull yet fiercely mesmerizing. Even so, I would take upon his offer and our hands would entwine. I didn't do this out of pity or any other sympathetic sentiment, only genuine keenness.

I didn't fucking realize we were going to commit a lovers suicide afterwards. When I did grasp the situation, I remember clinging my arms around his neck, probably strangling him. And if my appalling screams weren't the reason for his growing discomfort, I'm certain it was my terrified inhuman pale screaming-onto-his-face face that caused it.

It soon seemed like just sacrificing ourselves in an old-fashioned way didn't satisfy his taste because he then decided to pull me away from him as if I were a wild stray cat, all of this happening while we were still in midair. For quite some time, I did like to think his intentions weren't that aggressive and it must have been the wind instead.

My eyes were shut tight since our partial detachment, my right hand was gripping tightly onto his when I sneaked a peek of him reassuring me with a warm smile. Then I was met with an overwhelming feeling of surprise, endearment and horror altogether at the sight.

"We're flying, not falling." I felt him flinch through his grasp on my hand when I said that.

With the last light of the day sinking past the horizon, I noticed his sudden disappearance from my side, I was too late. His hand had already slipped from mine, or maybe vice versa.

I could never forget his figure standing still above in the air while I was falling through that bottomless abyss, back to the place I was supposed to belong to since the beginning. 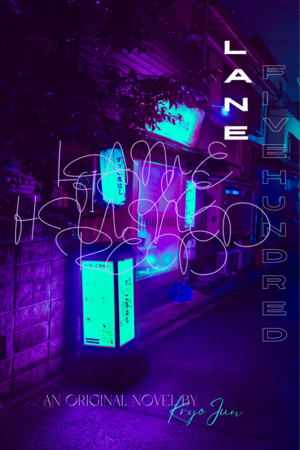