"They've entered the building through the back... uh! It's the pantry, they dug a hole using Earth Magic!!"

The 104th Special Student Magic Company was planted all throughout the massive palace. The devised plan was to spread them out and kill them off in groups, the receptionist had the ability to mark people with her drones but the downside was that only she could see the marked people.

Everyone in the 104th perked up once the action was closer to actually starting. Sitting in a dark room by herself, a girl was sharpening dual axes that would soon find a home inside of traitors.

"Just point me to them and I'll make sure they're dead!" She picked up her axes and stood up letting her twintails bob a little. She was basically dancing by herself in the dark while humming.

Her multicolored hair was almost too vibrant in the dark with the primary color being blue but red and pink were also quite prominent leaving her with crazy-looking hair. She was a little on the short side but nothing to stop her from fighting. As most people would call her, she was definitely cute and the light blue eyes only added to the innocent look she carried.

"...They've broken into groups... looks like this is going to be easier than first expected. Looks like three of them are coming right to you, Rena."

Rena stopped dancing in the dark empty room and put her axes into her belt.

"Oh? How many? Tell me it's at least more than three?" She was very eager for action, so eager that her brain completely ignored that she was told it was only three people. She even argued that she should be first in the ambush line and got her position. Anything using the North exit out of the basement or main entrance was her hunted game.

"Eh? What-? I'm sorry to say but... it's only three... it would be four but the spy is with them. She's the one holding a one so please don't kill her... you have about a minute before they'll pass by your door!"

Rena put on her hood and pulled out one of her axes and moved toward the door. For a split moment, a blue shine came over her body as she activated her passive defense of Water Magic.

Just as expected, her targets were moving in front of the door. She placed her hand against the surface and a blast of water shot the door off the hinges smashing into the wrong person...

She had hit the spy and slammed her into the wall not far from where they were.

Though, she took advantage of this no matter what.

She ran at one of the targets and as they were turning around, one of their legs was pulled by the inside of Rena's axe while the other was pulled with a tentacle of water that flew from under her cloak.

She didn't swing her axe down on them and instead swung it from the left striking them right in the back as they tried to roll out of the way. She turned around to see two swords coming right at her, she made no attempt to dodge the two weapons and let them both pierce her body without any issue.

But that wasn't even the real her, as the weapons went in to her, the figure lost its composure and collapsed into water. One of the Black Cloaks had no time to react as they got an axe to the back of their head but their partner was able to swing around, slashing with their sword but Rena crouched under the blade.

On her second hand, she was holding the axe near the top of the shaft basically turning this into a punching weapon. That's exactly what she did as she added power to the strike causing her axe head to stab right into their stomach.

A shining light blasted her in the eyes as the traitor jumped back. Rena was quick to recover thanks to her water healing, she stood up and her left axe shrunk in size and morphed into a throwing axe.

She threw the weapon as the traitor cast a healing light magic spell on themselves getting rid of the puncture on their stomach.

A single upward slash from their sword knocked the axe off course and they picked up their secondary hand that was holding a wand and pointed it at Rena who hadn't moved from her spot.

A shallow smile was on Rena's face as a water line shot down from her axe and hit the traitor on the shoulder. The line retracted before they could have a proper time to react and now an axe was planted in their collarbone. Sure this was pain they hadn't experienced before but they were still a Black Cloak, they shot off their spell as Rena started charging at them.

She made no move to get out of the way of the blast but a splash of water deflected the spell away from her and it smashed right into the wall as the distance was closed in that time.

Rena swung her axe and struck the traitor right in the chest. She had a lot of momentum in that time causing her to go past them but also for the Black Cloak to turn around for another strike.

She reeled her axe back and did the classic overhead swing striking the other side of the black cloak's collarbone also making them collapse to their knees.

She removed both of her axes and put them back onto her belt then walked over to the spy who slowly opened her eyes. Though she was just pretending to be hurt since she wasn't supposed to be part of this fight.

"...Strawberries," Rena said to the girl who kicked the door off of her and stood up, "You did good selling out these traitors. Our Receptionist will contact you shortly, don't you worry about a thing~!" Rena gave a thumbs up to the girl who nodded along.

But, higher in the palace, Sachiel was standing with her hood on around a corner. She wasn't by herself and had a majority of the company waiting with her. This was probably going to be the only big battle that will happen tonight as a majority of the enemy force was just making a mad dash toward the main meeting room where they were going to meet and kill Baron Kazami.

But, that was just false info, he was already gone in reality. They were hunting nothing more than a ghost.

The stomping of boots was approaching quickly and the catalyst to this attack would be Sachiel who pulled her poleaxe to her left, preparing to swing it. She was using the hammer side and when she thought the time was right, she swung her weapon and struck someone right in the stomach.

They immediately fell to their knees as the rest of her squad jumped from around the corners and out of rooms behind the traitors and started unloading spells into them.

"Such a shame. If only they were smarter with their choices..." Sachiel hated killing people who were like her, Executioners, she was over it rather fast as these people did want to harm the country that raised them.

It's not like they were forced to be Executioners. They could basically quit at any moment which is why she had no real sympathy for these kinds of people.

She flipped her poleaxe around again and swung down into the person she just struck with the hammer side, ending their life.

She walked around the corner and saw that the traitors were holding out with magical shields but sooner than later they would have to move or die of the overwhelming firepower.

Sachiel raised a hand to the group as one of them yelled Sachiel's name. She was pretty known around Gravitywell but also known in the school she transferred from before coming to Gravitywell. That's where these people came from, she knew them but they still already made their choice.

She closed her hand and increased the gravity on the traitors instantly disrupting their magic and crushing them into the ground. They were unable to cast or move, so, the next step was death by firing squad. The 104th unloaded spells into the group trapped on the floor and only stopped once they didn't hear any more screams.

Sachiel released her magic and gave a heavy sigh.

"I'm fine. Thank you for asking." Using her Gravity Magic was very tiring in every way possible, especially when using it on big groups like that. She was basically out of magic and asked for a transfer from someone just in case she had to keep fighting.

Someone delivered some magic to her as the receptionist chimed back into all of their ears.

"The bodies?" Sachiel was wondering what they should do with these, it was a pretty big mess to deal with. Executioners were pretty good at getting rid of bodies so this would be a breeze if needed.

"Leave them. Uh, someone else will deal with them..."

Everyone could get along with that. Moving that many bodies would be a pain in the ass. Just because they could doesn't mean that they wanted to. With that out of the way, they didn't take long getting out of the house and back into the forest that wasn't far from the site of their mission.

They had a plain view of the road and as they were waiting for their leader to show up, they saw a carriage ride up to the gates.

"Who is that?" Rena stepped forward putting a hand above her eyes even though there was no sun out to get in her eyes.

The uncertainty was less than usual. Once the carriage was inside of the walls, they had no idea what to do if that wasn't him.

"It's him! Also, Major Krea is approaching!"

They all felt the energy signature and looked over as the Major's camouflage dissipated leaving her visible. She threw down the body of the woman who was leading this whole organization and removed the cloak they were wearing.

"Burn the body. When we get back to Gravitywell, there's an announcement I have to make to all of you."

"...Is something wrong? You usually sound stoic but something is different this time." Rena bounced forward eyeing down her leader who just stared forward ignoring the girl below her.

She was correct though. Krea was different in her inflection, was something wrong?

"We'll speak on it when we get back." Krea moved her eyes to Rena who sighed and turned around as the body was starting to be immolated by the Fire Magic users.

Whatever Krea had to say was bad enough for her to sound slightly different. That could only mean something was wrong and that something was also horrible, she only spoke like that once before and that was when they had to fight on the front lines during the war. It was their first time fighting in such a large battle but they came out all fine, so what has her worried like this?

Only time would tell, honestly... 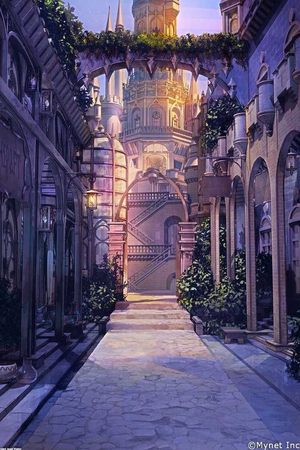