The Skeleton & The Idiot Sorceress

Now that the ritual was successfully completed, I need to focus on getting us out of here.

"Listen here girl. We need to make our way through each floor of this labyrinth to get back to the entrance."

"That shouldn't be too hard. Getting all the way down here was super easy." She exclaimed.

That was something I still didn't understand. How was she able to get down here completely undetected?

"How exactly did you manage to get all the way down here in the first place?" I asked.

"What do you mean? I just took the stairs."

There's no way it could be that simple of an explanation.

"You're telling me, you took the stairs from the top level, floor to floor, to the bottom level and didn't encounter a single trap or undead that entire way?"

"Well yeah, I honestly thought this place was completely empty until I encountered you."

That can't be right. There is no way that's possible. Each floor has a group of undead assigned to patrol it. There is also a boss assigned to manage each one. Something really strange is going on here, I just don't know what?

It is possible that this girl is lying and she single handedly cleared out each floor. I mean she did claim she thinks she's "pretty good at magic". However, I just can't see her being capable of that. She just seems too naive.

I was about to start questioning her about her magic abilities, but a loud rumbling noise interrupted me. The room began shaking. Suddenly a wall began to crumble.

Oh no! It's him. I completely forgot about him. As the final boss of this dungeon, Lucian prepared a fail safe in case anything happened to me.

When Lucian was first gathering his undead army many decades ago, he resurrected a creature that was completely uncontrollable. Its sheer physical strength and savagery was so great, that it had to be imprisoned deep within the labyrinth. He had to create a magic force field to prevent it from breaking out of its confinement.

Unfortunately for me the force field was intentionally set up to be directly linked to my life force. If anything were to happen to me, the force field would be broken and the beast would be released. This was a final insurance policy set up to prevent anyone from getting to Lucian himself.

Dust was kicked up from the rubble of the destroyed wall. It created a cloud in the dim room. From that cloud you could make out the outline of a massive figure with glowing red eyes.

The smoke eventually settled and revealed the fearsome beast known as the Zombie Minotaur! The Zombie Minotaur was like any minotaur, part bull and part man, but as the name implies, this one is also a zombie. Meaning it is an undead like me.

What makes zombie minotaur so fearsome is its pure supernatural strength and its walnut sized brain. It's strong enough to toss boulders one handed, but so stupid that it doesn't know not to destroy everything around it. Also due to the fact that it's undead, it doesn't really feel any pain. Lucian had no choice but to imprison it because it would destroy the entire labyrinth.

"Who's that?" Asked Erika not seeming to notice the danger we are in.

"Now's not the time, girl! Just run to that corridor, quick!"

We both turned and sprinted to a narrow corridor. Luckily it was narrow enough to temporarily slow down zombie minotaur. Unfortunately, the floor's exit was on the opposite side of the chamber. That meant we had to somehow get through that beast to get there.

"Why don't we try talking to him? Maybe he's a reasonable guy." Erika said, trying to catch her breath.

"I can assure you, we can't reason with that thing."

"Then what can we do Mr. Skeleton? We can't stay here forever!"

Zombie minotaur was punching at the corridor to try to widen it so it could fit through.

"It's simple, I'll just cast a basic fireball spell at his face. While he's distracted by the flames, we'll dash past him and make our escape." I said with complete confidence in myself.

"Will that really work?"

"Of course, I have zero doubt it will. I am a master sorcerer who is nearly a century old. I've been through way worse. This staff I'm holding isn't just for show!"

"But isn't that staff just a stick? I thought, cuz you're old and stuff, you like used it to help you walk."

I took a bit of offense to that. I mean yeah this staff does look like a plain stick, but that's because I lost my old staff when I died. It's nothing special, but at least it gets the job done.

A staff's purpose is to help a sorcerer channel their magic to make it easier to cast spells. We don't necessarily need a staff to cast magic, but it tends to be more efficient and less strenuous on our bodies than using our hands.

Now that I think about it, this girl who is a sorceress (supposedly), doesn't have a staff or wand. It's unusual for any mage not to have one. I'll question her about that later, for now I need to focus on the task at hand.

"Just wait, you'll see my power! Make sure you're ready to make a break for it."

I walked down the corridor towards that monster. I stopped just in front of where he was trying to break through. He let out an angry roar,

I held the staff in my right arm and aimed it at his face... Huh? Nothing?

It doesn't seem like I can use magic right now, but why?

"Mr. Skeleton is everything alright?" Erika shouted to me.

Suddenly it dawned on me. What must have happened is the ritual must have drained the girl of all her mana.

Mana is the energy stored in a mages body that allows us to cast magic. It is drained when mages cast spells. When it runs out we have to wait for it to regenerate before we can use magic again.

What I'm guessing happened, was during the seal transfer process all her mana was completely depleted. Since, I'm her thrall now, she is my host. This means for me to cast spells, I have to use her mana. Since she is out of mana, I am unable to use magic... This is not good!

Suddenly while I was caught off guard, Zombie Minotaur's hand reached out and ripped off my right arm still holding the staff. He tossed my severed limb behind him.

Luckily I'm undead, so I didn't feel anything. Also as long as I can retrieve my arm I can reattach it. The issue is how exactly are we supposed to get out of here now without magic? I retreated back towards Erika.

Erika's eyes were wide with shock.

"It's fine. As long as we get it back I can reattach it later."

She looked at me with a worried expression.

"That's good I guess, but did you forget how to use magic or something?"

"No, of course not! The problem is the seal transfer drained all your mana, so we can't rely on magic to escape."

"What are we going to do then?"

Hmm? We have to somehow distract Zombie Minotaur, so we can slip past him.

I still had my satchel and the dagger on me. I opened up the bag to see if there was anything I could use. One thing stood out to me, a half full jar of salt. Then it occurred to me.

"Ok I have a plan, but you have to listen carefully and do everything I say."

"I happen to have a glass jar of salt. I'm going to throw it at his head. It should break and the salt should cloud his vision for a moment. When that happens we run past him and split up. I'll lead him to the trap you were caught in earlier and you go get my arm. Then we'll meet up at the exit."

"Are you sure this will work? I mean your last plan didn't exactly work out. We could still try just talking to him."

"Yes, it has to. That beast will literally tear apart this entire place. I need your absolute focus, any hesitation and we are both dead. Understand?"

"O-okay," she said with a slight hesitation in her voice.

Hopefully she understands the urgency of this situation because both our lives depend on it.

"Take this just in case something happens to me."

I handed Erika the dagger from my belt. I don't know how much good it will do for her, but if anything happens to me it's at least something.

We walked back towards the beast. He was still trying to break through the corridor. I could see his eyes red with rage.

I prepared myself. I took the jar in my remaining left arm and aimed at its head. I stepped forward and tossed it. It shattered, depositing a plume of salt over his eyes. It let out another roar,

We ran between its huge legs and split up to our goals. It turned around and started after me.

I ran past the pressure plate of the trap. Zombie Minotaur is too big for the cage, but it's heavy, so it should temporarily get it off our backs to escape.

It walked towards me, its heavy hoof came down onto the plate, but nothing happened! The chain holding the cage must be stuck on the pulley.

"Mr. Skeleton, keep him chasing you and lure him back to the trap. The chain is old and rusty. I think I can break it with that dagger you gave me!" Erika yelled across the room to me.

I told her to get to the exit after getting my arm. She didn't listen, but I am not going to argue now.

I ran another loop around the chamber. Zombie minotaur chased after me. Erika stuck the dagger into a rusty link of the chain and began prying at it. I finally got back to the trap. The monstrous beast stood over the pressure plate, when Erika got the chain to break. The iron cage came slamming down onto Zombie Minotaur's head knocking it to the ground.

With that we both took the opportunity, while it was down to escape toward the staircase to the next floor. I hate to admit it, but this girl really saved me back there. Maybe she is more capable than I thought.

"Here's your arm and staff back, Mr. Skeleton."

Erika had a relieved look on her face.

"Thank you. Just so you know you saved me back there. So thanks for that too."

I reattached my arm. My robe was quite a bit torn up from that ordeal.

"It's no biggie! We're like partners now, so we have to work together!" She exclaimed with a smile on her face.

Well that's one floor out of our way. Unfortunately, we have many more to go. We'll have to be on our feet because I'm sure we'll have other trials that lay ahead. 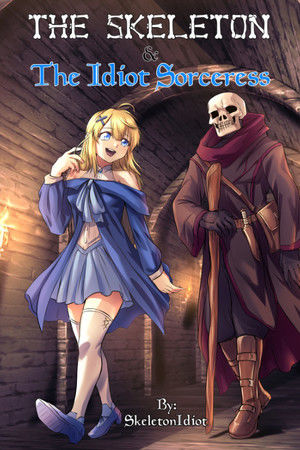 The Skeleton & The Idiot Sorceress