The draft from the window had a calming touch to her skin. She could almost feel herself drifting deeper into her slumber. She began to float as her mind drifted off and before letting her mind go blank, she thought back to herself… I hate this school.Bookmark here

Finally torn from her adolescent self-servitude when three distinct rings from the school bell battered her ear drums. She raised her head visibly disgusted with her environment. The sound of the school bell was always menacing. With its hollow drum sounds echoing and reverberating throughout the school. But for some reason, it was unusually more deafening today. “Why couldn’t they use some sort of cheery chime like every other school in Japan does?” She tiringly asked herself. Nonetheless, if there was anything good to take away, it was that classes were now over, and Fuyu could finally do as she pleased.Bookmark here

She sat up in her seat and stretched her arms as far forward as the universe would allow it. Wringing out every joint and over tightened crevice. She then let off a yawn so deep it turned her eyes into puddles and stretched her jaw till her chin was nearly digging into her neck. Once her senses came back intact, she glanced around the room at the rest of the class, only to realize one thing.Bookmark here

No one was there.Bookmark here

Startled and confused, she peered out the window beside her and saw that it was pitch dark outside. An ominous feeling crept over her as she confirmed the time on the clock hanging just above the chalkboard.Bookmark here

Nearly two hours had passed since the end of classes and somehow, she’d slept straight through it. She was flabbergasted, but even more so, furious that not only her classmates, but the teacher himself could allow her to be left behind. “Piece of shit sensei!” she uttered to herself as she stood from her seat. Just as she turned to search for her bag something caught her attention out the corner of her eye. Something written on the chalkboard.Bookmark here

It was written large and hastily. A sick prank? she thought as she stepped closer to the board. She had anger crawling across her face as the idea that someone in her class could find enjoyment at her expense. But one area particularly absorbed her. A red streak running from the bottom of the ‘e’ at the end of ‘Leave’. Although she was unsure of what it was exactly, she had a faint chill creep through her skin when she brushed her finger across and was unable to wipe the streak away.Bookmark here

Sick of feeding into this poorly played attempt at riffling her feathers she turned back towards her desk and feigned ignorance, bent on making her way back home. But as she peered at the classroom from where she stood there was a sense that things were a bit… different.Bookmark here

All of the lockers that lined the bottom half of the back wall were empty. Considering that her classmates often left some of their binders, textbooks, or notebooks behind after class, it was unusual to say the least that every single locker would be left completely vacant. But that wasn’t all. Posters from class assignments, photographs from school trips, culture festival decorations. Bookmark here

The room felt oddly barren and there was an eerie breeze wafting through the air. Something was definitely off.Bookmark here

Fuyu stepped outside into the hallway finding it nearly pitch dark; but even then, she was certain of it. This wasn’t her school at all. Bookmark here

A faint squeaking sound drew her attention upwards. Just above her head was an old chandelier that she was not familiar with, but at this point that was just one more peculiar thing to add to the list. It was barely hanging on, swaying slowly back and forth as if it could drop at any moment.Bookmark here

Fuyu cautiously walked around it and turned to face the extending hallway in the opposite direction. Her eyes slowly but surely adjusted to the dark environment; allowing her to make out the old wooden framing that garnished its walls. The moonlight from outside the few windows that lined her right-hand side gave her the bare minimum to work with as she watchfully prowled her way down the hallway. The aged wooden floorboards creaked beneath her feet and the occasional shuffling of leaves outside the windows resounded around her. Bookmark here

Fuyu had finally come across an intersection. The hallway continued into the dark on both the left and right of her, but it was straight ahead of her that triggered her the most. She was standing still just as sure as she was still breathing, but the floor continued to creak in front of her. Not only that… it was getting closer.Bookmark here

Suddenly a girl in a school uniform similar to hers appeared from the deep abyss of the apparently never-ending hallway. Walking straight towards her. She had the urge to call out but a certain… hesitation… held her mouth shut. Nonetheless the person continued to walk forward, eventually revealing her face as she approached closer and closer. Bookmark here

Not only did she have the same uniform as Fuyu, but the same face as well. Bookmark here

Her breath trapped itself in her throat as her heart stumbled off its rhythm. Feeling as though it had stopped. A hard gulp painfully forced down a packet of air into her chest. “What the fuck is going on?” She terrifyingly questioned to herself. And just like that, the mirror image of herself casually stepped closer without any reaction towards Fuyu; before turning to its left and disappearing in what appeared to be a staircase. Bookmark here

Somehow, Fuyu gathered up the courage to follow behind the inexplicable individual that had just appeared before her. Climbing the staircase and landing on the floor above. Much like the rest of the school, the hallway was dark, brooding, and ominous. However, unlike the level she had just ascended from, there were no windows. Just a dark passage lined with doors on both ends. Dim fluorescent lightbulbs seemingly miles apart from one another struggled to hold on to their light like a dying insect trying to suffice what is left of it after being crushed beneath the shoe of a thrill seeking adolescent.Bookmark here

Noticeably, the girl from before was nowhere to be found. Bookmark here

She walked up to the first door. Carefully placing her hand on the knob and giving it a quiet and controlled twist. The door was locked shut, which would turn out to be the same for every door she tried to open as she continued forward bit by bit. Then suddenly a large crashing sound ricocheted throughout the narrow passageway. She turned around and noticed a light pouring out from a door just at the end of the hallway. “That wasn’t there before,” she whispered underneath her breath. The lightbulb above flickered continuously, illuminating the dust in the air as it passed through its rays. She looked down realizing that there was an arrow crudely drawn on the floor pointing towards the room down the hall. It was painted in a deep red, but she hadn’t the heart to find out what it was painted with.Bookmark here

Following in the direction of the arrow, she made her way over to the unnerving room. As she crept closer and closer, she could hear the sound of water running just up ahead. Stepping into the doorway, she was met with a bathroom that echoed the unsettling atmosphere of the rest of the building.Bookmark here

She walked inside and approached the running faucet just below a smashed mirror. This time she was sure of it. Dripping down from the glass and settling into the basin below was a line of blood. It trickled until it caught the edge of the running water, spreading into its widening puddle. Bookmark here

She was terrified, of course, but at the same time a rage boiled within as the whole situation grew on her. She began kicking the stall doors open. In search of someone or something… anything. She just needed answers; or at least something grounded in reality to get a hold of. But to her disappointment, every single stall was empty.Bookmark here

Then finally, after taking in a much needed, but long overdue deep breath, a wave of common sense brushed over her. My cellphone! Why didn’t I just use my phone and call for someone? She contemplated. Maybe I truly want to believe that it was some sort of ill-advised prank this whole time? She then reasoned with herself. Regardless, at this point the only thing worth considering was a way out; and thus, Fuyu retraced her steps back towards the classroom.Bookmark here

Room 6-2. It was just a few feet away, and she could feel a bit of relief as she approached its doorway.Bookmark here

And there she was, her own two feet placed beneath her as she peered into the exact same classroom she’d waken up in. But directly in front of her. Staring at the chalkboard. Was none other than herself.Bookmark here

This was too unreal… too inconceivable, too unbelievable… too fucking crazy. She stepped back in disbelief, as if her body were forcibly trying to flee. And just as her heart skipped another beat, she collided with the wall behind her. That person standing just a few feet in front of her; the other version of… herself, turned towards the door and looked Fuyu dead in the eyes. She could see that she was just as afraid as she was. And in what felt like a moment’s time, the doppelganger rushed towards the door and slammed it shut. The expression on her face pasting itself into the back of Fuyu’s eyes. She seemed not only petrified to be looking at a complete photocopy of herself but horrified in a way that gave the impression she was attempting to escape from something.Bookmark here

At this point she couldn’t think any further as her mind had been trying to make sense of too much at once. Her thoughts had nearly come to a full stop when a familiar creaking sound made her remember one precise detail. Bookmark here

Before she could even turn to look above, the chandelier came crashing down. Gruesomely crushing her beneath it. Bookmark here

In an instant, she was dead.Bookmark here 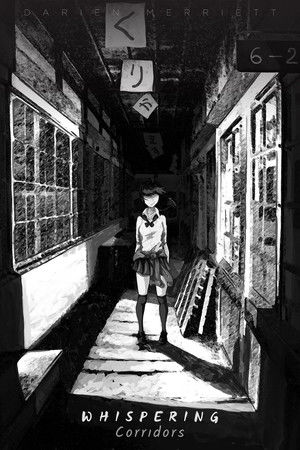