The security gate where the two had been standing was the epicenter of the blast. The instantaneous inferno made quick work of the now-mangled checkpoint.Bookmark here

A sea of corpses, normal for a battlefield but so out of place at a government facility like this, spread out before them. What just occurred was aberrant beyond belief.Bookmark here

Yet, 01 was no worse for wear. The worn out, second-hand suit jacket he had on was now little more than frayed cinders on his back, but 01 himself made it through the explosion unharmed.Bookmark here

01 had a way of surviving on battlefields no matter the circumstances whether he wanted to or not. It was as if he were impervious to the twists of fate.Bookmark here

Although, a sturdy build like his didn’t guarantee survival. Luck had a great deal to do with this particular incident. 01, durable as he was, would have been among the casualties had he been closer to the blast. Bookmark here

“Karen, are you hurt?”Bookmark here

“Can you see? How many fingers am I holding up? Any nausea-?”Bookmark here

“N-No, and that’s one finger. Just the one, right?”Bookmark here

01 was quick to prop Karen up against his knee and check her vitals. Though she sustained no visible injuries, identifying internal trauma was impossible from a single glance.Bookmark here

Audition, visual perception, brain lesions... any number of afflictions may have befallen her and go undetected by the naked eye. Bookmark here

01 pressed for confirmation despite his daughter's insistence. From pupil dilation to the small whorls of hair on her head, 01 was so concerned for her health that he would have checked beneath her clothing for lacerations had Karen not objected.Bookmark here

“...I ain’t got a clue who did this, but they WILL pay.”Bookmark here

Karen called out to 01 as he began seething with malice. She knew her voice had no hope of reaching him, but she had to try.Bookmark here

01 was certain that they had been the target of the explosion. If their assignment, which had seemed shady from the beginning, was indeed a trap, this proved he was right all along.Bookmark here

Being targeted by one person or another was already the norm. In that sense, he should have seen this coming.Bookmark here

“It... doesn’t look like they were after us... Based on the communications I’m picking up, the attackers are trying to seize control of this whole place-”Bookmark here

First came the muzzle of a gun, then the warning.Bookmark here

Two soldiers had appeared from behind 01 and Karen. It goes without saying trigger fingers were already in position on their fully loaded weaponry.Bookmark here

“Hands behind your head, knees on the ground, now!! You, too, girl!!”Bookmark here

These were not Federation soldiers. Their heavy footsteps alone made that fact clear as day to 01.Bookmark here

The other soldier shoved the muzzle of his gun into Karen’s back. She, however, was perfectly calm in the face of death. While not to the same extent as 01, she was accustomed to threats and violence.Bookmark here

Federation soldiers not caught up in the blast had already been dealt with. Rather than indicate failure, it showed the attackers had a commendable amount of tact and precision.Bookmark here

These were no ordinary soldiers. Their bodies were protected by dense armor plating and red eyes glowed from beneath helmets designed to resemble those of ancient samurai. The hiss of hydropic pumps in place of breathing or a heartbeat signaled that they were demon cyborgs like 01.Bookmark here

“Don’t be a hero and there might be survivors.”Bookmark here

Battle-hardened ones, that was 01’s impression of these mechanized soldiers. In terms of strength, there wasn’t much difference between them and himself.Bookmark here

“...How do you want to handle this, Dad?”Bookmark here

“Cooperate for now. The army might take care of them for us.”Bookmark here

01 calmly answered his daughter’s question in a quick exchange of untraceable brainwaves.Bookmark here

It was true, 01 wasn’t the least bit anxious. His mind was completely isolated from the fiery adrenaline in his veins.Bookmark here

Defeating these two would be child’s play, but he was unsure if doing so was a necessity.Bookmark here

Although the ambush had thrown the facility into chaos, it was still a Federation military building first and foremost. If the military was still the well-oiled machine he remembered from his time on active duty, a flare-up like this would be silenced with the hour.Bookmark here

Though, that was a longshot based on the disgraceful behavior he had seen thus far.Bookmark here

“Then say your prayers-”Bookmark here

These two intended to kill every last person in the facility, including 01 and Karen. Their brainwave communication was well hidden, but the same could not be said for the murderous intent radiating from their bodies.Bookmark here

The situation had changed. Now was the time to bear their fangs.Bookmark here

The soldier’s finger tightened around the trigger. Even 01, with his enhanced body, wouldn’t survive a round of electromagnetic, armor piercing silver bullets at point blank range. Father and daughter alike were one second away from being slaughtered.Bookmark here

“Right back at ya.”Bookmark here

However, that future would not come to pass this day.Bookmark here

The flash hit just before the trigger reached the point of no return, a blinding shockwave that simultaneously fried the closest soldier’s vision and launched him skyward.Bookmark here

The soldier’s senses were mercilessly severed before he could identify the incoming attack, a brain-shattering sonic wave. The last images captured by his eyes were the incoming knuckles of a clenched fist.Bookmark here 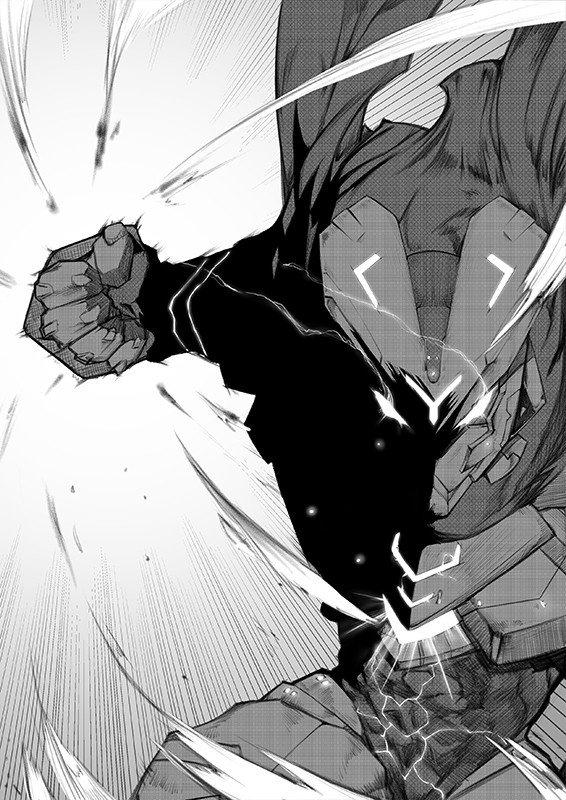 It took a full second for the remaining soldier to process what had just transpired. For 01, that was almost too much time.Bookmark here

A scattering of bullets sliced through his afterimage and consequently embedded themselves in a solid concrete wall further back. The soldier's accuracy was spot-on, but nothing more. Perfect aim was meaningless if the bullets never reached their target.Bookmark here

Weaving his way through the lethal rain, 01 swiftly and skillfully closed the distance.Bookmark here

Then, another blow. This one was a spinning kick as graceful as it was deadly. Carving a crescent moon in its wake, 01’s foot severed the soldier’s head at the neck.Bookmark here

Karen, staying low per usual, jerked in surprise as the disembodied head landed in front of her face with enough force to lodge itself in the cement floor. Had the angle been slightly different, her own head would have been crushed beneath it.Bookmark here

Sonic shock waves and bodies physically capable of producing them. Only mechanized soldiers had the ability to destroy one of their own kind in a single blow.Bookmark here

Karen looked up the moment she realized combat had concluded. Standing before her was the father she knew, a completely different man from the one who had been kneeling beside her moments ago.Bookmark here

A crimson cape fluttered in the wind, dancing around scarlet gold bionetic armor that glowed black at the seams, a web of energy lines from the black hole engine at his core.Bookmark here

The demon cyborg known as the strongest to ever tread the war zones of the Anamnesisian Conflict, the battle to determine the fate of all humanity, and supposedly died a hero’s death now stood before her.Bookmark here

“...Yeesh. Never can catch a damn break no matter where we go.”Bookmark here

“...This was just bad timing. As I was about to say, these attackers are probably working with Number 10. You know, that terrorist? Their style is strikingly similar.”Bookmark here

“...They’re makin’ a shit-ton of enemies if ya ask me.”Bookmark here

With unnatural serenity for someone who just survived close-range combat, 01 glared down at the corpses he just created.Bookmark here

Their faces were unfamiliar, but he could not rule out the possibility that they had a connection to him of some kind. Be it a link in their past or what was at stake in the present, nearly anything seemed possible.Bookmark here

“Anyway, what now...? The gate’s been sealed up tight... I could hack into the mainframe and pry it open from the inside...?”Bookmark here

“That’ll work itself out. It’d be faster to take care of these pricks first.”Bookmark here

Snuffing out the final cinders, being the one to finish the fight, was 01’s policy. Mercy ceased to be an option when they put his daughter in the line of fire.Bookmark here

“Use the security cameras to give me eyes, like usual. Try to get info on these bastards while you’re at it.”Bookmark here

“...The usual backup it is.”Bookmark here

While not thrilled about her assignment, Karen followed 01’s orders to the letter. Though splitting up did worry her, the thought of disappointing her father was terrifying.Bookmark here

Karen reached into her bag and pulled out a single sheet of cloth. The old, frayed piece of fabric was one of the few items 01 still had from his days in the military.Bookmark here

In fact, it was high-quality camouflage that could not only blend seamlessly into any type of surroundings, but completely mask sounds at the same time.Bookmark here

“No need to pout, ya hear? I’ll take out the trash and be back as soon as I can.”Bookmark here

With the utmost caution, 01 used his weaponized hand to pat his daughter’s head. There wasn’t time to put any love or affection into the gesture, but 01 hoped it would come across all the same.Bookmark here

01 made sure his daughter disappeared into the concrete debris before setting off into the building.Bookmark here

This was now a battlefield. Love and affection had no place here.Bookmark here