They both took the old storybook with its parchment pages from one of the shelves and spread it across the smooth stone floor. The lights filtering through the mansion windows made the handwritten letters even more visible. Eager to read a particular story in the book, they flipped through the unnecessary pages. Once they found the story, “The Fox of the Valley”, Eleanor started to read it out loud for Helene, who sat eagerly to hear the story, despite having heard it for a myriad of times. Eleanor heaved a breath in letting out her petite voice take over the serenity of the room.Bookmark here

“Once upon a timeーthey always started like this, there was a fox in a valley. That fox was big and was nimble like no other fox. The Fox also had a deep orange colourーsimilar to the color of your hairーthat pictured the dawn as well as the sunset sky. Despite its apparent beauty, many people from a nearby village were afraid of the Fox, the Fox was bigger than any fox out in the wild. They weren’t wrong, the Fox was indeed special. The Fox could sprint faster than any other animal, catch its prey faster than any other animal, and made any other animal scared of its presence faster than any other hunter. The Fox had many talents and had been living a long life; so long in fact, that the fox had been seen by many villagers from when they were young to when they are about to die, for many generationsーan immortal fox!Bookmark here

“One day, the hunters went out to catch some wild rabbits, they had always been doing this as part of the tradition whenever the sprengan time was coming; a celebration for the end of the wintarmanoth. The hunters got their bows and arrows ready; their bows checked and tightened with great precision; their arrows sharpened capable of cutting through parchment with ease. They marched through the woods with coordinated motion, surveying each nook and cranny for their prey. They moved slowly, lifting fallen logs and checking each hole in the ground for the rabbits. They continued this for several hours.Bookmark here

“One of them, seemingly exhausted, started to complain, ‘We have been here for so long now and we can’t find any rabbits!”Bookmark here

“‘It’s really odd, they have always been here, sometimes even flocking in groups, running around like chickens waiting to be caught.’Bookmark here

“Weird, indeed. ‘Tis only some time left before sunset, let’s try not to get our hopes down.”Bookmark here

“But their hopes were actually torn down. They didn’t get to find any rabbits grazing around or in their tight holes waiting to be discovered. Frustrated, they all went back to the village on sundown bringing the unfortunate news. The village people reacted in frustration with the news that they won’t be able to celebrate their annual coming of the sprengan time. Some people blamed witches for this, some people blamed the harsh winter that occurredーsaying that the last winter killed all the rabbits. Rumors began to spread and a few so-called witches were burnt at the stake as they took the blame for the sudden disappearance of the rabbits.Bookmark here

“The Fox looked at them from afar wondering the fatty smell that stank throughout the forest. Witnessing one of the burnings, the Fox pondered and pondered why the villagers would blame such a natural course of nature unto innocent women. The woman strapped onto the stake with fagots below her is just a small girl in her prime, probably twelve to fourteen winters old.Bookmark here

“The Fox planted her paw on the village square catching all the attention of the villagers. Many were scared, rushed into their houses, and boarded up the doors. Some were peering, stayed still, and looked at the majestic Fox with a gaze of curiosity. The Fox shrieked, sending trembles throughout all that remained still.Bookmark here

“The Fox finally asks, ‘Why, oh, why?’ she said, ‘Do you all burn your women?’Bookmark here

“No one answered at first, probably scared of the presence of the fox. A man who seemed to be the village chief came forward, he knew that he must take the initiative, or else no one would dare. He probably thought about what would happen to the other people if they anger the Fox. The man said softly, his voice stuttering, ‘W-w-we h-have no choice, g-great Fox.’Bookmark here

“The Fox stamped her paw again, ‘No choice, you say?’Bookmark here

“‘Y-y-yes, great Fox. The women,’ the man stood still, shivering a little bit, probably thinking about his next line, ‘The women, great Fox. T-they are cursing the surrounding forest.’Bookmark here

“‘What is your evidence for that?’ asked the Fox, ‘Also, why is it that women were burnt and not men?’Bookmark here

“‘Women, oh great fox,’ he said, taking some time, once again, to articulate his next lines, ‘T-t-the women that were burnt confessed to their crimes. T-t-they said they used magic. We have evidence of this, oh great Fox. T-t-they said it after we whipped it out of them.’Bookmark here

“‘Whipped it out of them?’ the Fox wondered, if they tortured them to confession doesn’t that mean that the women actually wanted their suffering to end, she thought, ‘Answer my other question,’ she stamped her paw again. The man shrieked and suddenly started blabbering in unrecognizable jitter, probably thinking of his next few lines.Bookmark here

“‘Stop!’ the Fox stamped her paw on the ground for the last time only to disappear quickly into the forest.Bookmark here

“The village man sighed himself in relief for he survived the encounter. His chest sank a little and he collapsed on the ground down to his knees. He felt somewhat light but a lingering thought remains in his head, what was that?Bookmark here

“After the sudden encounter the village had, the village male elders organized a meeting to discuss what just happened. They all brought different opinions, but the dismayed man who had the first-hand experience with the great Fox said a preposition that left an impression upon the rest of the gathering.Bookmark here

“‘So, what did the great Fox say? The sudden arrival of the Fox was totally unexpected. The Fox’s usual visits are usually during summer. Do you think we angered the Fox?’ Someone proposed.Bookmark here

“‘No sir, I don’t think that’s the case. The previous wintarmanoth was harsh, any living thing out there would struggle. The Fox probably came earlier for the usual offerings.’Bookmark here

“‘Mayhaps. . . Mayhaps. Perhaps, that could actually be the case,’ A man paused mid-sentence, ‘Aethelward, can you go through what the Fox said again?”Bookmark here

“The dismayed man then repeated the questions the fox asked with great inaccuracy, the more he repeated them, the more inaccurate they became. People were aghast by his account; that was only natural, deeming the Fox like a vicious animal ready to munch him if he hadn’t said the correct wordsーwhich he said he did. But after saying his last sentence, his theory why the Fox came, the people wiped all of their previous fears and replaced it with a brooding vengeful sullenness, ‘I-I think the Fox is defending the witches, sir.’Bookmark here

“A few nights went by, the burning of innocent women, women tortured to confess to crimes they haven’t committed, continue. The Fox became restless but she knew that if she stepped her paw on the village square again, they'd deem her as a heretic as well and might rebel. Little did she know that they already viewed her that way, a heretic who actually taught the women the black magic they knew.Bookmark here

“One night, the village men marched their way to the edge of the forest, wailing, shouting, pitchforks and blazing torches in hand. Swung them recklessly around as if driving out a ghost, and that’s what they were believing, actually. They thought they were driving the Fox away, but as soon as the Fox showed herself, they stopped momentarily only to be urged by the same man who confronted the Fox a few days ago. He encouraged everyone to continue, ‘That Fox is a heretic. A devil’s assailant. The one who turned our poor women into the devil’s disciples.’Bookmark here

“The Fox couldn’t believe her eyes. She didn’t think that they would react this way. With a strange concoction of emotions, mostly confused but also anger, the Fox stamped her foot down on the hard ground near the forest, this act caught the attention of some of the villagers. Ignoring the Fox, the rest of the villagers continued their wailing and protest against the Fox. The emotions mixing in the great Fox's head turned into pure frustration only to be released, ‘What are thou reasons to come to my den?’ she yelled.Bookmark here

“The man coordinating; the same man all along, answered for everyone, ‘Oh! ’Tis only natural for man to avenge the fallen women that stumbled unto the filthy hands of a devil’s assailant.’Bookmark here

“‘You have misunderstood! Damned man!’ the Fox yelled again and left. The frustration welling up inside her took over her and somehow the best thing for her to do is leave.Bookmark here

That was about the last page of the story, the next page told the story of Lily Lilypad. The two petite children lying on the floor, Eleanor with the book in hand and Helene who almost fell asleep, feeling somewhat disappointed and empty, thinking that mayhaps the story had a continuation. Other folktales always started the same, once upon a time, and ended the same, the end.
Bookmark here 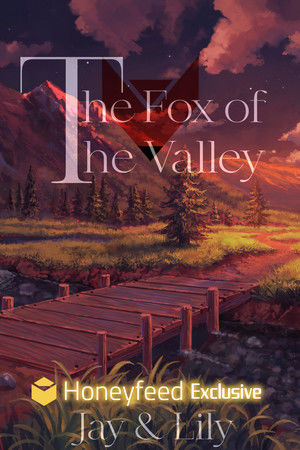