The Caged Canary And The Wingless Bird

'As I walked down the street a familiar breeze hit me, sending me into an old maze of nostalgia which I had not visited for a long time. The world stood still as I once again took the leap, my arms outstretched and fingers trying hard to grasp her hands. But I was too late...'Bookmark here

Irina watched the trees, watching them sway back and forth in the warm breeze that blew past. It was that time of the seasonal cycle when summer begins to blossom into something the body feels as much as the brain, when the emotions catch their thermal updrafts, when one feels invincible. Her ocean-blue eyes gazed at the golden field that stretched out in front of her, swaying along with the summer breeze. Even her amber hair became one with the breeze.Bookmark here

She closed her eyes and stretched out her arms at her sides as if embracing the flowing wind. She wanted to become one with it, she wanted to be free. Her fingers could feel the breeze weave through them like threads of silk passing slowly through the gaps and weaving a cloth she could never see. It was something that she desired to see but fate would never allow her to. After all, she was just another caged canary that had tried to fly on her own.Bookmark here

"Hey, " she murmured softly, her eyes opening to gaze at the sky. Bookmark here

The sky never failed to amaze her. It was filled with mysteries and endless amounts of space, overflowing with wonders. It had so much space and seemed to go on and on almost like an endless blue void. However, the sky was ever-changing. It’s various colours of navy blue, black, lavender, blue of a robin’s egg, turquoise, and a fiery tangerine-painted the dome above her. Sometimes the clouds that came in with the changing wind tended to be puffy and tall; other times they were no more than mere wisps and dashed across the sky as if directed by some divine paintbrush. Bookmark here

Today was a special day for both of them. It was the day when the two had first met and had promised each other to be there for one another until the end of the world.Bookmark here

"Let's run away." Her eyes closed once again to stop the singular trail of tears that escaped from the corner of her eyes. "Ya know, like far from here. Far away from this town. I don't want to stay here anymore. It's suffocating and it feels as if I spend even another hour here, I will die."Bookmark here

She slowly opened her eyes and turned her head to look at the black-haired boy, sitting beside her, in the eye. Alabaster noticed the redness that had crept in the ocean blue of her eyes due to the tears. There was no glimpse of hesitation from her. He couldn't find a hint of fakeness. What she had just announced was real.Bookmark here

"Are you sure?" he croaked unsurely.Bookmark here

Alabaster, in his seven years of life, had never seen her so determined. It was as if she was finally breaking through the cage in which she had resided for most of her life. But was it really that or was it just an illusion? He didn't know but what he did know was he wanted to protect her. It was the one promise he would keep even if he couldn’t keep the others that may come in the future.Bookmark here

"Yes, " she replied, softly but her tone was firm. She was ready, ready to take that leap. Ready to fall. Bookmark here

'Has the world ever been as beautiful as it is today? Will our dreams, that we dreamt of so long ago, ever come true? Will I be ever able to confess my feelings to her? I don't know. Perhaps the answers lie within me but I can never find it. After all, I am a wingless bird that has always looked up to her - a bird with wings to soar into the sky and travel through this vast world but not allowed to - while I stay grounded wishing I could fly...' Bookmark here

"Okay." Alabaster murmured softly, if she wasn't near him she would have never heard his declaration. But she was and that was what mattered.Bookmark here

Irina's eyes sparkled with joy as she smiled. A pure and innocent smile that Alabaster had thought had been lost to this cruel and fearsome world. But on that day he saw it again. And he had never been happier.Bookmark here

It was the smile that had shown him that even if you are a nobody in this world, you still could be free. You could dream and achieve your dream. This was the smile he had been trying to see again for so long. And now that it had finally presented itself to him, he is going to do everything in his power to protect it. But before he could take the leap there was something that he needed to do.Bookmark here

Something that was either going to make him or break him. It was going to be a one-way journey and the worst thing was, he didn't know his destination but he knew his path.Bookmark here

He stretched his arms and grasped Irina’s hand, interlocking their fingers together. They were cold and soft, it wasn't the first time that he had held her hand but this time was different from other times.Bookmark here

Irina was surprised by Alabaster's sudden action but she didn't complain. Her eyes only sparked with unknown feelings as the inside of her stomach began to churn. It was as if whatever she had eaten this morning had vanished and something else had taken its place, something that was somersaulting in there. Bookmark here

'What is this?' She wondered. 'I remember reading something similar in mom's diary but she only felt this way when father proposed to her….. Don't tell me Alabaster is…'Bookmark here

"Irina Von Elvenstein, I Alabaster Dorhemeint has been in love with you for the last seven years. And today on this holy day of summer solstice I want to confess my feelings to you..." He closed his eyes and took a deep breath preparing himself for the worst. " I love you Irina Von Elevenstein and I can't imagine a life without you. So will you stay by my side forever as my wife? Will you marry me?"Bookmark here

Alabaster's voice echoed through the field shaking the Town of Lostrea. His eyes were burning with determination as he prepared himself for the rejection but that never came to pass. Instead a pair of warm arms enclosed him in its loving embrace.Bookmark here

"No one has ever said something so nice to me as you just did…" her voice cracked as the dam of tears she had tried to stop came rushing out. " Thank you so much for loving me… Since you confessed your feelings I guess I will reply with honesty."Bookmark here

Silence before the storm.Bookmark here

"Since you are so helpless without me I guess I have no choice but to marry you… I will be in your care from now on."Bookmark here

Song of The Lost BirdsBookmark here 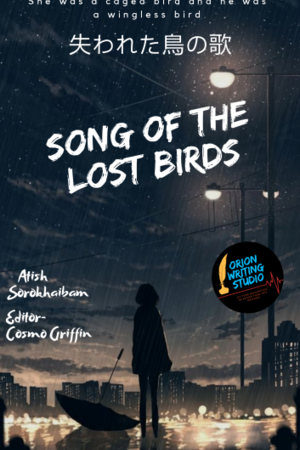