Eons ago, before civilization, there existed nothing. There was only the Null, a limitless mass of energy. The “Null” severed and separated and became something. That something contained the energies for everything we know to exist today. It swelled and burst, giving birth to the very plane in which we exist. The stars came to be, and they filled everything. The Goddess Yadra came to be when the Null separated: her immense power stemming from the very energies that bore this world.Bookmark here

She gave birth to many things which inhabit this land. Those things evolved, and grew and changed, and eventually became beasts. Creatures of sky and sea. They became dragons and monsters, demons and spirits. They were beings of power, strength, cunning and wit, and man was among them. Yadra bequeathed life unto many things through her power and she loved them all. In their similarities and their differences. Centuries passed and these beings grew in size and strength. Developing their powers, they harnessed the energies within and without. They came to realize the uniqueness given to them by the Goddess. Thus began the antiquity. Thus, there was chaos.Bookmark here

A millennium of war raged; victims of all sorts fell at the hands of those who sought to conquer and those who sought to protect. Unable to bear it any longer, Yadra descended upon the world and, in all her power, split the lands. In her anger at the evil, an unquenchable fire was born, and it sought to punish all who would abuse and hurt. She wept tears for those who were lost and hurt by battle. The water that poured took form and spread, that all beings may know tranquility. She breathed new life into the world and winds rumbled: freedom reigned. Finally, she took power from within herself, caressing it in her hand, and gently placed it upon the land. She bestowed the world with an everlasting strength. This strength spread and new lands and life emerged. Seeing this, she was pleased, and once again returned to her place beyond our world. Separate from us, but never too far. She named our world a new name, one befitting of the ideal she held for it. She was the world, and the world was she. She so named it ‘Halfryta; meaning ‘Peaceful Home.’Bookmark here

Centuries passed and life flourished and blossomed anew. War had ceased, and the world knew peace… but this peace did not last. The powers bestowed by Yadra never ceased to grow. They fell in love with her creations and eventually too, influenced by man, beast, and monster alike, became chaotic. What had become tranquil would freeze in death wherever the waters lay. Winds raged and blew, becoming a torrential storm, mercilessly ravaging all. The flames’ wrath could never be quenched, and it knew no consequence. The earth never ceased to grow and spread, beasts and animals alike growing mad from the flow of unending power she’d bestowed. Yadra could not bear to again see the world she loved torn asunder and so she acted quickly, descending yet again. Gently stepping onto Halfryta, her powers gathered before her and took form: as beast, bird, drake, and sea creature. Tranquility, the water. Wrath, the fire. Strength, the earth. Freedom, the wind. They bowed before her in fault, ashamed that they had been influenced so. The powers of the world, her powers, were now present before her, and she recognized their shame. Thus, she bequeathed one more gift to the world. She raised her hands to the sky and clouds formed. They rippled and crackled. A white flash fell from the sky, and its energy took form. Behold, it was lightning, and it took the form of man. It was sovereignty, standing unwavering amidst all; a solitary intellectual, and emotional justice. Like the others, it too was given a task: to maintain the balance between the elements which made up our world. Balance between all things which lived upon Adora Halfryta. It shared the powers of the elements to the individuals who’d gathered [A1] with righteous intent: their families and bloodlines bearing a mark and inheriting these great energies. These families joined hands with the colonies of man and held a gathering, ushering a truce with the nonhuman tribes to maintain peace. Those dedicated to that effort became the first envoys of Halfryta’s Church: the First-Generation Scions, direct inheritors of Adora’s gifts, named Clerics: one who should stand a sage above all other priests and disciples. Someone who would lead the church for its own sake. Not for worshipping the Goddess, but to work for the good of all of Halfryta’s creations.Bookmark here

The world has advanced since then. The broken lands of Adora cracked and spread further, taking up space all over the globe of the sea. Four continental bodies made up the world of Adora. The holy land of Halfryta, where the families of the Scions reside, is where our story takes place.Bookmark here 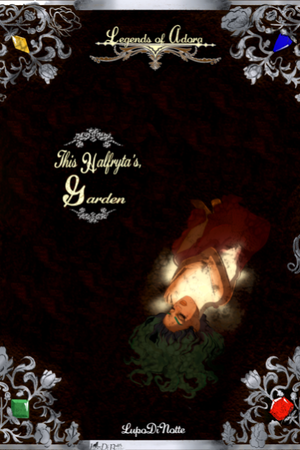