Kanato could feel his body slowly falling to the ground, it was as if everything was moving in slow motion. He closed his eyes tightly, bracing himself for the ground. But it never came. Kanato looked up and saw a tall boy with blonde hair and ocean blue eyes. "You okay?" He asked with a worried expression. Kanato quickly shoved the boy away and stared at him agrily. "Don't touch me human!" He said quickly. Judging by the way he said "human" it didn't take Naruto long to realize that he was a vampire. It was pretty normal for vampires and humans to go to the same school by now.

Naruto reached out his hand and ruffled Kanato's hair a little. "Why can't I touch you? I swear I'm not gonna do anything you don't like. Unless...you want me to?" Naruto said with a sly foxy grin. Kanato quickly slapped Naruto's hand away. "I said don't touch me! I hate you!" Kanato said. He then turned around and sped off to the other direction. "Hmph." Naruto simply said as he turned and walked down the hall.

As soon as Kanato made it to his class he saw his brother Ayato flirting with a couple of girls. Kanato walked over to him and grabbed his arm tightly while pulling him to the back of the room where no one could hear. "Ayato, you know everyone in this school, correct?" Kanato asked. "Oi sure I do." Ayato simply said as his eyes drifted over to where Yui sat.

Kanato took his time to explain all of the details about Naruto's appearance, when he was finally done he sighed. "That is a fourth year by the name Naruto Uzumaki." Ayato said before walking away. Naruto...Naruto...Naruto...The name kept repeating itself in Kanato's head for some reason, and Kanato wanted it to stop. 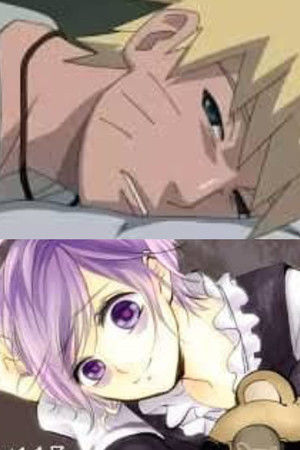