You Want Me? No Way!

More than half of the students at Special Class X teased their fellow classmate Ally, as she blushed while receiving a boquet of roses given by Zyred, who is her childhood friend and first love.

As she got hold of the bouquet, she bowed her head because she was so shy due to the intense teasing of her classmates.

“Hey! Stop it, you guys! My little Ally is uncomfortable with your intense teasing!” Zyred shouted at her classmates in a friendly manner.

“By the way, thanks for this.” Ally raised her hand that holds the bouquet of roses.

“It's nothing. Anything to make you happy.” Zyred replied with a smile.

This kind of scene continued to happen, even after Ally finally said ‘Yes’ to Zyred.

She always supported him, waited for him when he had other duties after school, cooked food for him...

For her, everything was perfect.

Until she heard the sentence—

“No. I'm going abroad. I don't know when I will be back. I don't want to hold you back. We won't be able to focus and concentrate if we have a long distance relationahip.” Zyred calmly explained. As if it's just nothing to him.

“No but Allison. I am not gonna change my mind.” Zyred interrupted Ally, before she can even form a proper sentence.

“Good. Bye.” Zyred said then turned back and walk away.

Ally grumbled as her mother called her. She hasn't even slept, yet, her mother is calling her again.

“What is it, mom?” Ally asked, hiding her grumbling expression.

“You have a visitor.” her mother said, which made her curious. Who would’ve visited at eleven in the evening? Her friends and colleagues are all asleep already for sure.

“Who—?” Ally was interrupted by a voice that was so familiar.

“Me.” Ally turned towards the person and—

“Why are you here?!” She cannot believe that this guy was here. She doesn't want to see him even though she had already moved on.

“Hah! You want me back? Are you crazy? Did you hit your head somewhere? No way, dude! We're over.” she angrily said.

This guy! What does he think of her?! A rag that he can use to wipe of the dirt, but continues to say ‘Welcome’? No way! She's not in love with him anymore!

“Allison! Is that how I taught you? Her mother reprimanded Ally.

“He just came back, and you're acting like that?”

“Hah!” Ally grumbled as she heard him say that.

“Allison, you talk to Red. We'll leave you two here.” Mr. Sy, Ally's father, finally spoke after being quiet for a long time.

Ally secretly gritted her teeth. Zyred better thank her parents because if not for them, she won't talk to him. Not because she's bitter, but because she was just starting to mend her life and she wants to keep it that way. She doesn't hate him, but she wants peace in her life, that she can't help but be sarcastic and defensive towards Zyred.

She's not in love with him anymore.

After her parents left the two of them at the living room, only silence accompanied them.

After a while, Zyred broke the silence. 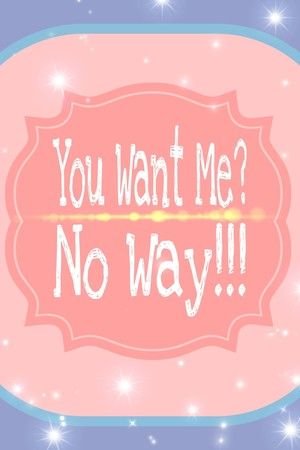 You Want Me? No Way!