I swore I would have done everything Brother Arcis asked, but a secret or two would be fine, right?
Bookmark here

I was going to the Royal Academy starting tomorrow. He had nothing to complain about. He also didn't need to know that I fully intended to return and become a black priest once I graduated.Bookmark here

I didn't care if Brother and Grandmother refused to teach me anything. I'd been watching them doing the send-off for years. It sucked, I knew. That's why it sucked even worse when Brother went off to do it without telling me on my last day of freedom.

"Don't you have a lot of preparation to make? You depart tomorrow after all," he told me when I called him out at the chapel.Bookmark here

"THAT is why you shouldn't have left me behind!" I complained. Who knows how long will I get to see a live send-off again once I leave home?

"I apologize, Sesil," he always made this droopy eyes under a pitiful frown whenever I complained to him like this, "Come now, it will not do to delay the departure. The spirit is waiting."Bookmark here

I knelt beside Brother, right in front of the coffin. The corpse was buried in a lot of lilies. The beauty of the flowers do not match the contorted expression frozen on the dead man's wrinkled face.

We clasped our hands in front of our chest, little fingers slightly parted from the rest. Then Brother started to sing.Bookmark here

There was no music, only Brother's voice, but the air felt full with melody. Then the colors started to change. Light colors became dark and dark colors turned into neon hue. Gone was the solid body in the coffin, replaced by magenta-colored light floating in the shape of the corpse's body. Pale reddish light flew from Brother's mouth into the corpse in the coffin as if visualizing the song as it melded with the body's remnants.

I could only see this view at this kind of occasion, but this was what Brother saw the whole time. They said your perception became twisted as you spend to much time looking into the spirit plane. You ended up losing the ability to perceive the real world.Bookmark here

They said it was a curse.

That's why we live so deep in the forest, away from the village. That's why there's so few of us--well, them. Only Brother and Grandmother are black priests. That's why I had to be a black priest too.Bookmark here

Brother Arcis suddenly fell back while I was distraught. I caught one last glimpse of the spirit plane before it disappeared as Brother stopped singing. Instead of herding the leftover soul away from the dead body, the magenta light turned black as if it was burned.Bookmark here

I hurriedly propped Brother Arcis up. I could feel his chest heaving up and down as he gasped for breath, "Are you okay? What's wrong?"Bookmark here

I looked at the coffin. The body had disappeared without a trace, only the flowers and offering tray remained. So this is that kind of send-off. No wonder Brother was exhausted.Bookmark here

I helped Brother get back on his feet. He grabbed his cane with one hand and let me hold his other hand as we walked.

"If you had let me become a priestess--" this wouldn't have had happened. I had to stop myself before saying something that would upset him. Bookmark here

"This is inevitable, Sesil," crap. Too late, he heard me, "Even if we had more people, this is just how things are. Both the master and I would rather see you spread your wings and see the world instead of condemning yourself to this kind of life."

Brother's grip on my hand tightened, but he wouldn't look at me as he spoke. His eyes were obscured by a pair of thick lenses so i could not read his expression.Bookmark here

Before I could complain, he turned to me with his gentle eyes and gave me another pat on the head, "As much as I'm sad to see you go, your adventure starts tomorrow and I can't wait to hear all about it."

I remember all the fight we had in the past. How many times had I asked him and Grandmother to make me an apprentice? Well, we didn't exactly "fight". It was more like me screaming at them while Grandmother laughed and Brother Arcis gave me a cold stare. I was ashamed of how I acted back then, but I couldn't help it.Bookmark here

I couldn't help it back then, but now I was old enough to pretend. "...Yeah! I can't wait to tell you all about it either!"

I would go to the Royal Academy.Bookmark here

I would go and see the world that Brother never got to see.

I would also come back for him at the end of that journey.Bookmark here 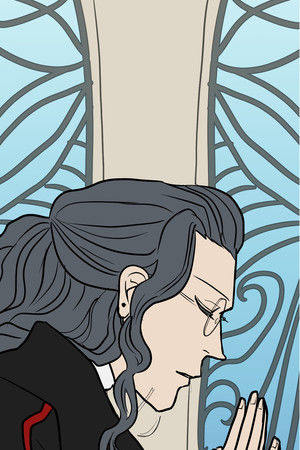