12 April 2060, 1st day of the war. It's raining, every thing is on fire, buildings are blasting metox killing humans at the same time a father and a husband is trying to save his wife and his 2 children, one boy and a girl., boy is 13 year old and girl is just 6 year old, (boy name is Aria and girl name is yumi) whole family is terrified they are trying to hide but metox are very close to them, they have to go from theire otherwise they all will killed. So Aria's father throw a stone other side of the wall to distract metox and they all immediately started running Aria was running 1st and her mother was at behing him and she had yumi in her hand and Aria's father was at the last so they can protect their family, he had just a steal rod in his hand. When they were running, metox saw them and started chasing them so Aria's father said to his family "go Missa go, take these children away to a safe place, don't let them die please goooo", her wife said " I will dear I am not going to let our child die, dear we'll meet in heaven, good bye" (Aria was crying for his father and her sister was saying dad dad at that time) and then they left that place, after 3 hours of terrifying minutes they found a ruined house which was looking safe so they stayed there, after some time a man was comming to the house and missa was thinking hes his husband so she started to run towards him but he was not his husband he was a random man and he gripped her hand for no reason and then he tried to force her and she was screaming for help so then Aria immediately rushed towards her mother but before he reached to her a 3rd lvl Metox come and he killed both Aria's mother and that man by stabbed a big spear in their stomach, the man screamed so hard and died but Aria's mother died without saying a thing and with a smile on her face. At the same time Aria was standing at the door of that house his legs was trembling and his eyes was opened and he was frozen their. That metox leaved that place after killing both. Aria was crying and beating the wall until his hand started to bleed he goes to her sister and hugged her she said what happened brother where's mother, he said she's with dad don't worry she'll be fine, now we have to survive alone, she said wile crying, they are dead na brother we will also die na, he said no we'll survive I'll protect you, don't worry. After some hours yuki said brother I am hungry so he said, wait here sis don't go anywhere I'll come hear in 5 minutes let me get something to eat. She said fine brother. He goes outside carefully and checked so many ruined houses so he can get something to eat after some minute he found 3 pieces of bread so he took these to her sis but when he arrived to that place he saw his sis was lying down at the flore he suddenly goes inside without seeing anything and tried to wake up so a man come inside and said don't worry she's fine she's sleeping, and he saw a metox on the same flore, that man killed that metox. He was a  AI Hawk 2nd lvl serpent he saved her from that metox. 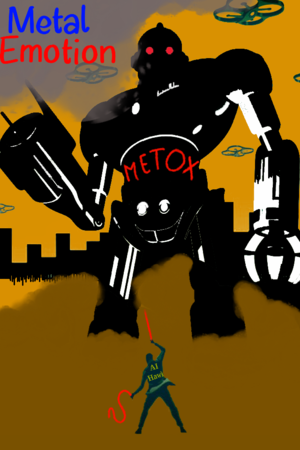