The world has ended

Dawn came, bright sunlight removed the darkness and shone all over the city. A peaceful city.

It was time when sunlight reached the top of big building, shining brighter than ever.

A big apartment having 14 or 15 floors. Sunlight also reached their. Entering the top most floor through the window it shone the entire room.

A man sleeping in that room, on the bed, woke up as sunlight fell in his eyes. A big yawn came from him. Stretching his arms up he stood from his bed.

He went out of the room, towards another room -washroom- took a dump. Sound of flushing never came.

He opened up refrigerator it was filled with water bottles. He took a bottle out, filled a mug with bottle water, brushed his teeth and used mug water.

He ate some canned food for breakfast. Changed his clothes to a grey jeans, a black T-shirt and a normal leather shoes.

He hung his bag behind, a rather old bag with lots of stretches here and there.

Then left the floor without even bothering to lock the front door. He took the stairs right by the elevator. Moving down slowly and slowly. One step per stair. Not making any noise he moved downwards.

He reached the exit of the building. Walking out of it without looking back he moved ahead through a wide street -a shopping area- different varaity of shops were there but none had a single person inside not just shops but there was not a single person in that area.

He walked through that silent street not bothering to look around. He reached a certain shop which also didn't has a single person inside. He sneaked inside, took a special care not to make any noise.

He stole a packet of cigarette and a lighter then started walking on the straight road again. He took a large puff of cigarette.

He enjoyed it as he kept walking and smoked.

He witnessed a man at some distance heading straight towards him.The man walked a zig zag path eyes stared at the road and his hands hanged from his body as if they were broken. Skin so white even more whiter than milk and thin as there wasn't a single layer of flesh underneath them.

They both narrowed down the distance heading straight towards each other. He moved his right hand towards the back chain of his bag. He found a small pebble inside the bag pocket which he threw at his right side. Huge sound echoed as the pebble hit the wall of a shop at right side.

Upon covering a huge distance he reached a shop, a novel shop. He searched inside a little then picked up 5 different books.

He reached an old house. Gates were open and he entered through them. Without any hesitation he climbed the stairs reaching the open roof. A chair was placed there. He sat on the chair and started reading those books. The moment he grew tired of reading, he closed his eyes then put the opened book which he was reading on his face. That book covered his whole face not allowing a single ray of sunlight pass through.

The world has ended, he spoke in his mind. He continued, Everything happened five years ago in Japan. The virus broke out, it changed the living beings into flesh eating monsters. They look normal at the start but you wouldn't know when a pack of teeth would come out of nowhere and will be biting you like crazy. Only one bite and it's game over. We called those monsters 'zombies'. They just took six months to destroy humanity. Everyone was killed, not a single soul is alive. Everyone just ended up dead. It was just luck that i climbed over that wall and survived.

He stopped talking inside his brain. A long moment passed he sat on his chair without moving a single part.

After some time sun hid behind big clouds. He picked up the book from his face then stood up. Putting the book on the chair he left the roof. Went down the stairs, he took each step nice and slowly. His bag on his back, his hands in his pockets of jeans.

I only have one motive he talked once again inside his mind. To find a survivor. Just one. I don't need a large group. One is enough. I will prefer a girl… but a boy is fine too but still if god will make only one wish of mine true… i will ask for a girl.

I want to talk to someone. It feels like i haven't talked since five years.

He reached a certain room downstairs. A kitchen. He put his bag on a platform right next to the stove. He checked the drawers and refrigerator to find something. Found some food cans.

He opened his bag then took out a handgun and a knife to make some space for food cans then started putting food cans inside his bag.

A shadow reached the gates. Getting bigger and bigger until a head popped out from the gate.

He filled his bag from the cans without noticing what awaited behind his back.

A skinny girl, with a white skin moved forward, toward him, staring at the ground. Slowly she shortened the distance then stood right behind him. He still didn't notice her.

Her mouth opened ready to take a big bite out of his shoulder. She made a loud noise grarr and jumped on him.

He startled, lost grip of the food can which he was about to put in his bag. But gained control over his body. He moved his hand fast enough to stop her from bitting him.

His right hand on her head, her teeth few centimeters far from his shoulder. He fell on the platform on his back.

She looked skinny and boney but had enough strength to surpass the force applied by his hand. He knew he won't last like this. He looked here and there from anything. At his left there were his gun and knife.

He straighten his left hand and his hand also reached the gun but he didn't pick it up rather he went for the knife which was few centimeters far from the gun. He struggled to reach the knife.

She also closed their gap. Clacking her teeth as if it already got the fresh meat inside.

He struggled again, stretched his hand even further to reach the knife.

His fingers reached the knife. He pushed the knife towards himself with his fingers. Finally he grabbed the knife and pierced her skull with every strength in his arm.

He pushed her away. Slipped slowly down to the floor. His both hand on his knees, his face up to the walls.

You must think why i didn't use that gun even if it was closer than the knife, he asked it to someone in his mind. Hhaha i haven't used this gun since that day, five years ago. The day when all of my friends and group members ended up dying because of me. 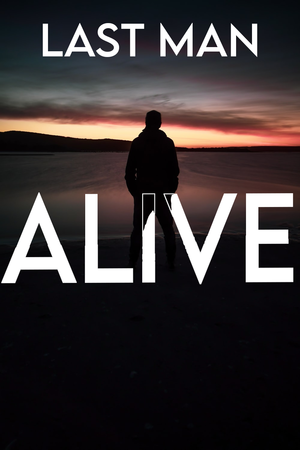