The Beastman Saint is H*rny, so I was Kidnapped to Another World Vol. 8

***Ruthen, a port city in the human territory of the Enclave***Bookmark here

For quite a long time now, the port city of Ruthen had yet to see a ship appear on the horizon. Most of the human ships lay abandoned at its harbor, with many of the crews recruited into the Duchess’ armies sent to reclaim the ‘Outer Walls’, or bolster the forces fighting against the rebellious Beastmen led by Konka of the Insetus. The city itself was nearly empty, save for some old people who couldn’t fight in wars, and children who were too young to be involved with it.Bookmark here

The coast watchers, because of the dire economic situation, were forced to shed their responsibilities for better work opportunities. This left the duty of watching the seas to some of the old folks who could still look out far into the vastness of Cherwind’s seas. But then, while they were able, most of them never took their ‘job’ seriously; after all, with the trade between the humans and the Avinus halted, who needs to watch a calm, empty sea?Bookmark here

As such, a ship approached Ruthen’s harbor without being detected. The citizens of the city were only made aware of the new arrival’s presence when they heard a loud booming sound that shook them all awake.Bookmark here

“Look! There’s a ship on the horizon!”Bookmark here

“Is that…even a ship?”Bookmark here

The men of Ruthen ran to the harbor to confirm what they were seeing. It was a ship, albeit it was missing its oar banks on both sides. A funnel was placed at its middle section, spewing white smoke into the air, and it was quite noisy. But then, the ship moved noticeably faster than the usual human galleys—most of which were powered by oars.Bookmark here

Everyone was silent as they watched the strange ship dock into one of the ports, and several men of the Eagle tribe flew from the deck to lay down the gangplank and unload their cargo.Bookmark here

“Greetings, humans!” the captain waved his hands to the bewildered citizen of Ruthen, “We, the men of the Eagle tribe, wishes to resume the interrupted trade between our cities!”Bookmark here

“W-What’s that?” a coast watcher broke the awkward silence of the human side with a question, “Does your ship have a chimney inside?”Bookmark here

“Oh that?” the Eagle tribe captain took a glance at his ship’s smoking funnel and laughed, “It’s steam, from boiling water. This ship has a ‘steam engine’ inside which is connected to those big ‘paddle wheels’ at the sides.”Bookmark here

“What?” the humans were even more confused.Bookmark here

“Ah, don’t worry; we’re as bewildered as you are. But hey, this ship is much better than the ones being propelled by oars! See, we don’t need many people to row, and we only have to focus on steering this watercraft across the seas.”Bookmark here

“Well…” the Eagle tribe captain shrugged, “It’s the idea of that strange person, Ursura of the Orphans, see?”Bookmark here

The marketplace of the human territory’s capital was slowly but steadily recovering from its previous destruction. A proof of that was the number of new stores opening for business every day, as well as the shoppers that frequently visit the commercial district.Bookmark here

“Check out our shop for your weaponry needs!”Bookmark here

“Best fabric for the best clothes! Grab it now for your lady!”Bookmark here

“I’ll take two of your fried fishes for a silver coin, deal?”Bookmark here

Amidst the drowning calls of the peddlers and the noisy banters between hagglers, the Grand High Priestess of the Beastmen, Sebastenerva of the Serpentinus, walked through the crowd. As she was a person of high stature among her kind, she was being escorted by several of her own Beastmen guards and accompanied by a human guide from the Duchess of Malvette herself.Bookmark here

After being appointed as the leader of the Beastman Saint’s Inquisition, Lady Sebastenerva started in Malvette as the best choice she had at the moment. Many Beastmen refugees from the ‘Outer Wall’ had come to the human capital city, and she could root out those who dare to oppose and conspire against Her Holiness Ruro of the Wolf in one big strike, if she planned her course of action well.Bookmark here

However, there was still another reason why she picked Malvette to begin her inquisition…Bookmark here

“Your Eminence, this way please!” the human guide leading her group pointed towards a certain section of the market, “If you’re looking for good pots and pans, this is a great place to start!”Bookmark here

“In fact, you couldn’t find any better iron wares anywhere else in Cherwind than here. Look at the crowd—”Bookmark here

“Crowd?” the Grand High Priestess looked around the near-empty alleyways, “All I can see are bored peddlers. You must be mistaken!”Bookmark here

“Err…th-this is strange!” the human guide tried to laugh the awkward air away, “Where’s the people?”Bookmark here

“If you’re looking for the buyers,” one of the sellers answered, “there they are, in that store at the corner. They’ve been going crazy about buying those high-quality iron cooking wares from Ruthen.”Bookmark here

“Ruthen? I didn’t know they are makers of iron ware!”Bookmark here

“Looks like you still have something more to learn about your land, human!” Lady Sebastenerva chuckled, “Anyway, I’m interested about those wares from Ruthen. Lead me there!”Bookmark here

“At once, Your Eminence!”Bookmark here

The other sellers could only watch in envy as the Grand High Priestess and her party joined the crowd of buyers of the merchant from Ruthen.Bookmark here

The shop of the merchant from Ruthen was small, but it was being swamped by customers eager to buy the items he was selling. The Grand High Priestess’ escorts had to squeeze themselves in, and push out the angry competitors, so that their liege could go in unmolested.Bookmark here

“Greetings, Serpent-lady!” the old merchant smiled once she came to his sight, “What can I get for you?”Bookmark here

“You’re in the presence of Her Eminence Lady Sebastenerva of the Serpentinus, Grand High Priestess of the Beastman Saint.” the human guide countered his words with a grand introduction and a warning, “Please watch your tongue!”Bookmark here

“Ah, my apologies, Your Eminence! My eyes are already weak; I didn’t notice the important lady before me!”Bookmark here

“It’s fine, old man!” Lady Sebasternerva was busy looking around the shop to bother about the formalities, “Indeed, one look at the items of this shop, and I could tell that these are of high-quality!”Bookmark here

“Thank you! But, I’ve been wanting to ask…is this…”Bookmark here

“I see Her Eminence has an eye for good wares!” the merchant clapped and rubbed his hands, “That pot you’re holding is made of iron and mithril!”Bookmark here

“Mithril?!” both the Grand High Priestess and the human guide exclaimed upon hearing the mention of the precious metal. The old merchant only nodded to confirm what they heard.Bookmark here

“S-Surely you’re joking!” the human guide replied, “Don’t you dare trick us! Mithril is a highly-valued metal to be used for mundane items like cooking pots and pans!”Bookmark here

“B-But I’m not playing jokes, Sire!” the merchant countered, “Please, look into its body well; you can still see the traces of mithril that was used!”Bookmark here

“He’s telling the truth, human!” Lady Sebastenerva confirmed, “This is a pot made of iron and mithril, with its underside made of iron.”Bookmark here

“Where did you get this, old man?” the Grand High Priestess ignored her human guide and asked the merchant.Bookmark here

“Oh, I just bought it as well, Your Eminence! Several days ago, a strange Beastman ship came to our city from the land of the Avinus. Its captain from the Eagle tribe traded those items to us!”Bookmark here

“We’re also surprised, Your Eminence!” the merchant continued, “But I saw it with my own eyes; a strange ship powered not by the strength of men but of a ‘machine’ called ‘steam engine’.”Bookmark here

“This…this is getting even more confusing…”Bookmark here

“Yes, Your Eminence. We’re also confused at first, but apparently, it was made by a woman they call ‘Ursura of the Orphans’.”Bookmark here

“Ursura of the Orphans?” the Grand High Priestess stared admiringly at the mesmerizing shimmer of the iron-and-mithril pot she was holding, “Alright, we’re heading to the Avinus lands right at this moment!”Bookmark here

“Y-Your Eminence?” one of her Beastmen guards couldn’t believe what she had heard from her liege, “How about the inquisition?”Bookmark here

“We’ll continue the Inquisition in that land!” Lady Sebastenerva declared as she tossed two gold coins to the merchant, “Let’s hurry!”Bookmark here 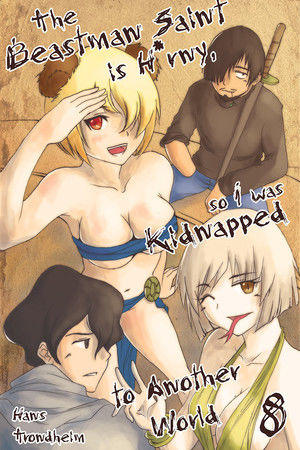 The Beastman Saint is H*rny, so I was Kidnapped to Another World Vol. 8