My First Girlfriend Is A Planet Buster Volume 1

Wake up, school, anime, dinner, sleep, repeat. This was Yuta’s life. School was alright, art was his best subject and during homeroom he watched anime on his phone. All the girls at the school were beyond beautiful. All Yuta wanted was to go on a date with at least one of them, a girlfriend would mean he would go from the shy and quiet kid to suddenly the king of the school! Wake up, school, anime, dinner, sleep, repeat. He continued this process until one day he got a letter in his locker.Bookmark here

Yuta looked at the small pink envelope. There was a wax heart holding it shut and his name was most certainly written on it. He picked up the letter and opened it up and took out the letter. The handwriting on it was absolutely beautiful!Bookmark here

The truth is...I really like you. Will you go out with me? If so, meet me after school behind the school. Bookmark here

Yuta’s eyes dazzled, “Woah!! No way!!” He grinned and clenched his fist pumping his fist to his side, “Hell yeah!!!” He said as he drifted to his fantasy, “I can see it now! This young woman is going to be my girlfriend and soon I’m going to be King of High School!!! Then more will want me!!! One!” Another girl popped into his mind, “Two!” Another girl, “Three!” More girls flooded to his mind as he gave a grin and his nose began to bleed, “I’ll have such a harem that Toei Animation will be BEGGING to make my life an anime! Yosha!!!” And with that Yuta dashed away to the back of the school. He took a deep breath and looked around, “Hmm...I wonder where she could be,” he looked at the letter again, “From how she worded it and the handwriting she’s probably cute and super shy.” Bookmark here

A soft gasp could be heard from around the corner. Yuta turned to see someone quickly hid behind the corner. “Y-You a-actually came…” she said, her voice was soft and rather adorable. “I-I was worried you wouldn’t…” Bookmark here

“Well I was curious,” Yuta responded with a smile, “Why don’t you come out?”Bookmark here

“Yeah, why not? If I’m going to go out with you I might as well see what you look like.”Bookmark here

“O-Okay…” she took a deep breath and looked around the corner at him. She blushed heavily as did Yuta. Whoever this girl was she had a super cute face. She looked away before she gave a soft sigh and stepped out from around the corner. Yuta’s eyes widened and he nearly screamed,Bookmark here

“WH-WHAT THE HELL?!?!!! I WAS EXPECTING A CUTE SMALL AND SHY GIRL NOT SOME GIRL WHO CAN FOLD ME WITH THE LAUNDRY!!!!!” Yuta screamed in the back of his mind. She blushed and looked away and rubbed her arm. The reason Yuta said that was because this girl stood at 7’9” and likely weighed hundreds of pounds. Bookmark here

“S-So….do you still want to go out with me….?” Yuta was in a panic. If he said no she likely would’ve crumpled him like a piece of paper and tossed him in the trash. If he said yes she’d likely hug him in joy, which didn’t sound bad if she didn’t look like she could crush his bones. “Y-You don’t have too…” she said looking down with a saddened expression, “I can see the look on your face….” she then turned, “I’ll leave you alone forever now…” And with that she went to walk off.Bookmark here

“Wait! Hold up!” Yuta dashed towards her and grabbed onto her hand. She froze and her heart skipped a beat. She turned and looked him in the eyes, “I’ve wanted a girlfriend for a long time! I’m almost out of high school and I realize that beggers can’t be choosers!” Her eyes widened and blush spread on her face, “So...I guess we can go out.” Bookmark here

“Y-Yuta-Kun…” she then turned and knelt down and wrapped her arms tightly around him. Yuta choked and gasped for air, “Th-Thank you so much!!!” Bookmark here

“I’ll try and be the best girlfriend I can be!!!”Bookmark here

“Th-That’s great! I can’t…!” Yuta nearly passed out before she let go of him. He inhaled heavily as air came back to his lungs, “Oh thank god!” She gave a soft smile, Bookmark here

“H-Hachimitsu?” He then paused, “Can I just call you Honey?”Bookmark here

She blushed and her eyes widened, she gave a soft smile and nodded, “Yeah, you can.” Bookmark here 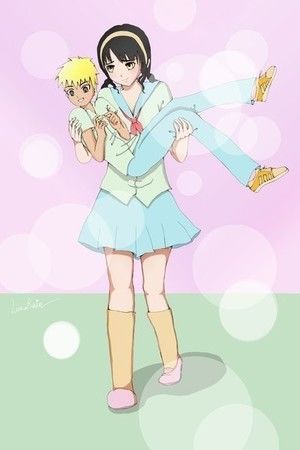 My First Girlfriend Is A Planet Buster Volume 1