Tragedy of the DEAD

The Land of Maidens and Corpses (Original)

It had been a while since I'd been late for school. No. . . It had only been a few days, probably. I wasn't the kind to intentionally skip school or arrive late, but I did it quite often. The tardy arrivals were beginning to stack up, and I could feel that today's might just be enough for the glass to overflow.
What am I doing?

I began to leg it to school, as quickly as I could. Damn Aya, never wakes me up does she? Maybe, if she'd start to help her brother out a bit more he wouldn't be so late!

I reached the main street of the city. The light's still green! I can make it!

I didn't make it. The light went red just when I had reached the beginning of the pedestrian crossing. This meant that I'd be even more late. Goodness, I'm gonna be expelled, am I not!

As I mentally broke down, and began panicking, she caught my eye. A little girl, probably still in kindergarten attempted to cross the road. I hadn't quite understood the situation yet, and looked over to the other side of the road.

A woman was walking around calling for her daughter. "Excuse me, you haven't seen my daughter? She's still in kindergarten and--". She finally turned around, and saw her. Her facial expression, was much more of a panic now. Shit, how didn't I realise!

I looked to the right. A truck was heading straight for her, as she was halfway across the road. Dammit! I gotta stop her!

I dropped my bag on the ground, and kicked off, rushing towards her. I'm not gonna make it! It didn't matter. I had to keep on going. She was as good as dead if I didn't try, and at least I might be able to save her.

I had always wondered what came over me at that moment. I wasn't particularly heroic, nor did I do anything remotely admirable. Even so, long after, I haven't felt like that. For that single moment in my life, I felt like it was a necessity to be the hero. But like all fools who came before me, I succumbed to the same fate. Failure.

The shock shattered every bone in my body, while launching me across the street, the little girl still clutched in my arms. I should've dropped her. No, I should've never risked my life to attempt such stupid heroism. I wasn't the hero, and I wasn't going to survive this. Little did I know that, death merely became a luxury I couldn't afford.

It didn't take long for an ambulance to arrive.

"Sir, you're going to have to let go of her," one of them said. I was still holding her? How? I couldn't move my arms. I didn't loosen my grip on her somehow. They pulled her out of my arms, and quickly put her down on the ground beside me.

"The shock nearly killed her, but we might just be able to save her if we act fast!"

"We're taking him with us too, but I'm afraid they might not be able to do anything. . ."

"Look at him for god's sake! He's already half-dead. It's too risky to transport him right now. We'll have to wait until another ambulance arrives. Just focus on getting her to the hospital for now. I'll deal with him."

I was going to die. That was all that mattered right now. I couldn't see, move, taste or smell anything. In a paralysed state, and on death's door. This was how my life was going to end wasn't it. I would've at least liked to have gotten to school on time before I died. . . Nothing that I can do now, anyways--

A burning pain stung on my leg, and moved through my body. What was that! The crowd around me gasped, but I was still blinded. What happened--

I was attempting to scream, but the words wouldn't leave my mouth until--

After a few moments, he knew no more. 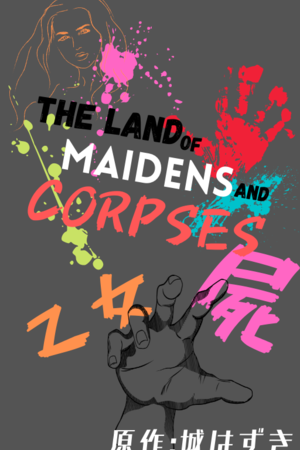 The Land of Maidens and Corpses (Original)