I was born in a taxi

It was a hot August night. Kevin just finished his shift and was preparing to leave when his boss suddenly called his name.

"Hey Kevin, could you stay a little longer today please? Just an hour, even half an hour would do! Please!"

"Sure, I mean I don't have anything better to do at home." replied Kevin putting his uniform back on

"Thanks a lot Kevin! Keep this up and maybe I will give you the 'Employee of the month' award!"

"But I am the only employee here boss!"

"Did you said something?" (Kevin's boss had the habit that when he was told something that he didn't like, he would just pretend that he didn't hear it. Once, he was almost arrested when a police officer caught him over speeding and he pretended not hearing the police siren. The whole thing ended with a huge police chase, but in the end, thanks to an incredible lawyer, he just got a fine.)

In the end, Kevin had stayed 4 more hours at work.

"Boss, I am leaving now. And I mean it this time!"

"Sure, sure! Thanks for all the help today! Also you can call me by my name you know, call me Arthur!"

"Maybe next time boss!" replied Kevin while opening the door

Usually, Kevin walked from his job back home. It wasn't a big distance and it was good exercise for him. But after working double the time he was used to, he was too tired.

"I should take a taxi, it can't be that expensive."

Kevin grabbed his phone and called a taxi. In a few minutes the taxi arrived.

Kevin entered the taxi and looked around. From the outside the car seemed normal but inside it was a mess. There were car accessories everywhere. First there was a pair of plush dice hanging from the center mirror. The numbers facing Kevin were 3 and 4. From the car's old radio volume button, there was a Christian cross hanging. The passenger seat in the front was the cleanest part of the car. Not a single accessory on it. And while the other seats were worn off from the regular use, the front seat was almost factory new. In the back, of the driver, where Kevin was seated, there was a pillow that made seating on that chair more comfortable. Also, attached to the driver's seat backrests, there was a mirror. Next to Kevin, attached to the back windows, there were some worn out sunshades. That was everything that Kevin spotted when he first entered the car, and these little details were very important later in his story.

"Where are you going?" said the taxi driver

"I said, where are you going?"

For some reason, no words were coming from Kevin's mouth. Even he was surprised. After almost a minute he was able to speak and told the taxi driver the address.

"That took you a while!" said the taxi driver while starting the car.

The first few minutes of the ride were silent. In that time Kevin was looking at himself in the mirror. He saw his black, short, curly hair. He saw his brown eyes and his eyebags under them. He had those eyebags from childhood, even though he was getting enough sleep. He saw his nose that was bigger than average, but nothing special and his dried lips. He wasn't ugly, but he wasn't handsome either. He wasn't tall, but he wasn't short either. His height, with the high of the pillow he was standing aligned his face perfectly with the mirror that was pretty small.

After a few minutes of silence passed, Kevin felt like he should start a conversation to get rid of that uncomfortable atmosphere.

"Hey, did you know that I was born into a taxi?

"Wow, that must have been hard for your mom!" replied the taxi driver almost immediately.

And with that the conversation was over. Kevin hoped that the taxi driver will continue the conversation but that didn't happen. While trying to come up with something to discuss Kevin looked through the window. But the sunshield made it hard to see anything.

"You can remove the sunshield if you want." said the taxi driver

"No, I am ok" replied Kevin.(Actually Kevin was too lazy to bother to remove that sunshield)

Looking through the window, Kevin saw an ad for chocolate. It was a kind of chocolate that he was eating when he was a child. Kevin thought that that was a good opportunity to try and start a conversation again.

"You know, I loved that chocolate when I was little..."

"Really, I didn't heard about that brand."

"My mom used to buy me those when I was in 3rd or 4th grade. I would always eat one before going to soccer practice.

"I used to play. I quitted when I enter 7th grade because I wasn't good at it and all the girls were making fun of me, while the other guys in my class were getting praised. Looking back at it now that was a childish decision, but I guess you can't blame a child for being childish.

"I wouldn't laugh at a guy for not being good at soccer."

After the taxi driver said those words, Kevin realized something. The taxi driver was a female! He was astonished about the fact that it took him so long to notice.

"I didn't know girls can be taxi drivers too!" 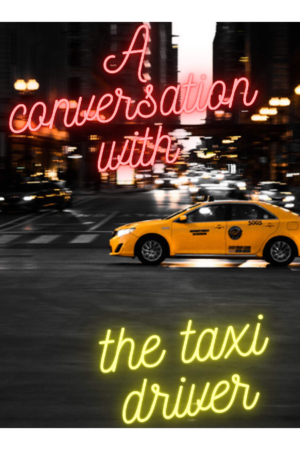