Everyone’s jaws were dropped. Such fiction is not possible in the real world. “My machine works as it reads brain waves of a person. Did you know as a person imagines something, the brain emits Alpha waves? Amazing right? This machine can detect different unique alpha brain waves and simulates them as a movie with the aid of programming”, Phantasie explained as his groundbreaking machine is pulled in a trolley to him due to its bulkiness. “This machine uses the modern technology of a graphics card, which are used in most advanced and powerful personal computers and simulates this imagination into reality!”, the audience was most certainly in shock, some were to the point of showing disbelief and some were sceptical in how this ‘Imaginator’ as they said in their minds, would work. Bookmark here

“Let me demonstrate this amazing ability of the machine. Now can someone in the audience give me a picture or maybe a scene?”, Phantasie looks over at his listeners, he sees a raised hand in the middle. “Yes, you, the person with the raised hand, what’s your name?”, Phantasie pointed to the raised hand and a young man rose up from his seat. “Hello, my name is Tor Braggins. Nice to meet you all”, the voice of the young man was very friendly and everyone in the room greeted him back as there wasn’t any hint of hostility and unfriendliness in his voice. “Nice to meet you too, Mister Braggins. Now, what image do you want me to picture?”Bookmark here

“Hmm, it is hard to say really...let’s start with something comical. Okay, picture Godzilla and the Marshmallow Man from the Ghostbusters fighting each other in New York”, everyone in the room roared with laughter as soon as Tor said that. “Haha! Mister Braggins, that is certainly a very comical image! Ask and ye shall receive”, Phantasie hooked up his machine with different probes which stick on his head presumably to read his alpha brain waves. “The machine is ready, now!”Bookmark here

As Phantasie said those words, the tv on the machine displayed a short video. The video showed just as Tor asked Phantasie to imagine. ‘Godzilla fighting the Marshmallow man in New York’, as the screen turned off as Phantasie got his probes off. People were astounded although some were still sceptical. “This is staged! Phantasie obviously got that kid in a script so that he would request that and the screen was obviously edited!”, one person in the crowd said. Some people even agreed with him. Bookmark here

“I knew that someone in the crowd was going to suggest that I put all of this together in a script regardless of the long-running history of me having countless awards and degrees which showed that all of my work done here and it is legitimate! but then again, doubt leads to belief so I shall clear your doubts. Mister Braggins, what is your occupation?”, questioned PhantasieBookmark here

“My job? Well, I am an author who writes short stories and also a journalist, why doctor?”, Tor replied. “Well, can you step forward to me and put this machine to your head? I want to Borrow your imagination”Bookmark here 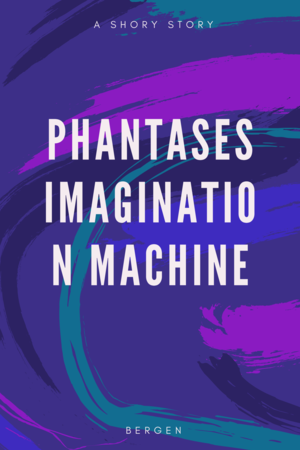