It was a weird thing but Alice calmed herself quickly.Bookmark here

("Maybe is just someone who looks alike.")Bookmark here

Alice extended her hand to help her get up but that girl was still scared of her and didn't dared to touch it, remaining down. Dissapointed, Alice retreated her hand and smiled gently. Bookmark here

The girl was so scared that her voice was trembling.Bookmark here

Alice looked at the old tower and noded.Bookmark here

"Yes, what about it?"Bookmark here

"That is the Sealed Tower, is said that it holds a evil monster who was sealed here to protect the world!"Bookmark here

" Oh silly girl, that wasan't a seal, it was a barier I set to keep the people from coming inside not outside. I put it before I fall asleep some time ago."Bookmark here

"That's impossible, the seal was put on that tower 1000 years ago!"Bookmark here

"But you don't look more older than me and you're so pretty!"Bookmark here

"I will take that as a compliment."Bookmark here

The girl started to lose her guard for o moment but her face had a terrifyed expresion again.Bookmark here

"If you're not evil then what is that thing!?"Bookmark here

The girl pointed with her finger the space from Alice's back where the ice coffin with Eric's scheleton was. Altough she had the power to teleport herself she could't teleport nonliving things so the skeleton took some time to float where Alice was. With a sad face Alice looked at the coffin and touched the ice.Bookmark here

"Oh, he is Eric, he was... let's say he is the motiv because I'm still alive today. Unlike me, he is not an immortal and can't live forever, he died 1000 yers ago and I could't let myself to leave him in that dusty tower."Bookmark here

"If you realy are then can you tell me what heppened in the last 1000 years?"Bookmark here

Alice extended her hand againe but this time the girl taked it.Bookmark here

"I'm Alice, what about you?"Bookmark here

The both girl smyled then let go of each other's hands.Bookmark here

"Ok, time for questions... What year is this, what do you know about what heppened 1000 years ago, and did someone ever told you that you look like someone from a long time ago? "Bookmark here

"These are a lot of questions... Well, this is year 1000 of the New Calendar and a millennium ago was a big war where the humanity was almost destroyed, no one know anything about what drived us to that point but is told in history books that a Godness from haven come down and saved the world. Since then a new calendar was adopted and the counting of years started from 0. As about my looks, my father told me that I look like the first queen, she come and taked the trone after that war was over. We have her portrait in the library if you want to take a look."Bookmark here

"I will like to do that, can you take me here?"Bookmark here

" First, can we go to see my father? I want to introduce you to him and to ask for permission to use the library. Also, I think he's panicking now that the barrier had been destroyed... that tower is a taboo for the most people în this contry."Bookmark here

("I could just walk into the library than see an old man, but I don't want to get too involved in this world. I assume that at the moment I will just follow this girl and in the worst case I will have to enter by force.")Bookmark here

The conference room was tense. At the round table were staying the king on a luxurious chair, at his back was stayng the Knight commander, at his right was his eldest son, at his left was the imperial magician and in his face, at the other part of the table were the nobles of the council, two Dukes and three Earls. Bookmark here

No one spoked. It was clear that the situation was critycal. After another two minutes, the royal magician breaked the silence.Bookmark here

"As everyone know, the seal of the Old tower was broken this morning. We suspect that the assassins from the north did it, but, altough thea seal was broken, nothing heppened so far and we don't know what to expect. If you have any toughts about it you are free to speak."Bookmark here

The nobles contemplled for some time and the one who raised his voice was Duke Alfred, a new noble who recently raised at the duke title after the death of his father. Bookmark here

"Are we sure that the assassins did it? As we all know, this isn't the first time when someone tried to break the seal but every one of them didn't succed."Bookmark here

"We don't know this as well. Maybe the seal lost it's power or what was imprisoned here died. I sent some soliders for a investigation but they didn't come back yet."Bookmark here

The one that spoke this time was the king. The nervosity could be heared in his tone. They all loked at them in silance but they attention was disturbed when a knok was heared at the door.Bookmark here

The door was opened and a guard entered.Bookmark here

"Your Majesty, the first princess want to meet your highness, what should I do? Bookmark here

"I'm at an important meeting, tell her that I will see her later!"Bookmark here

"But she said she brought an immportant guest!"Bookmark here

At those words, Lyna entered the room followed by Alice, with the ice coffin on her back. At the sight of her father, Lyna knelt.Bookmark here

"Fath... Your Majesty, I brought you an immportant guest, she is Alice, I met her this morning!"Bookmark here

All the eyes in that room falled on the girl from Lyna's back. Alice stood here looking straight into the king's eyes. Not wanting to wait any longer Alice opened her mouth not leting Lyna to end her introduction. Bookmark here

"I just want to use the imperial Library, don't mind me, this girl will explain to you later."Bookmark here

Those words come with no respect for the king or the nobles present there. Alice turned back and wanted to leave the room but was stoped by the guard's sword. Bookmark here

"What insolence, how dare you speak like this to his majesty. Kneel right now!" Bookmark here

Alice looked at him with her icy eyes ready to cut him into pieces when someone unexpectedly raised his voice.Bookmark here

The one who spoke was the eldest prince William. Bookmark here

"Father! This girl was insolent to you but I think I falled in love with her, please let me have her in my bed tonight!"Bookmark here

Alice was indeed one of the most beautyful girls in the world and that wasan't unexpected but she loked back ath the fool prince with killing intent.Bookmark here

The King loked at her with an evil grin. If he hated something it was to be disrespected. He tought that this will be a good leason for her but even in 100 years he couldn't expect the next outcome. The prince approched Alice while raising his finger.Bookmark here

"You, come with me and throw that disgusting thing from your back!"Bookmark here

He obviosly was refering at the Eric's skeleton. When she heared the word 'disgusting' her rage rached the bottom line. With her right hand she sliced the air cutting the hand that pointed at the coffin. The prince feel a sharp pain and when he looked at his hand, he seen it on the ground. The hot blood come out from his arm and he screamed in pain.Bookmark here

"This time I take your hand, next time when you dare to open that stinky mouth in front of me, I will take your life!"Bookmark here

No one in the room said a word. Everything was so fast and unexpected that they didn't know what to say.
Bookmark here 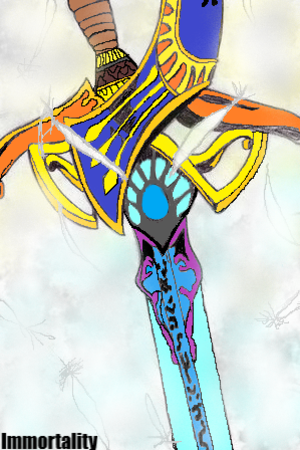